Black Adam Review: The Hierarchy of Power Stays Pretty Much the Same

For fifteen years now, Dwayne Johnson has talked about being a big-screen version of DC Comics’ antihero, Black Adam. Like Tom Arnold talking up a potential True Lies 2, it’s taken on an air of “believe it when we actually see it.” Well, as the Rock says, “Finally…” Black Adam has come to the big screen, so you can believe it’s a real movie. Believing it had an actual script, on the other hand? That’s tougher. Black Adam review. 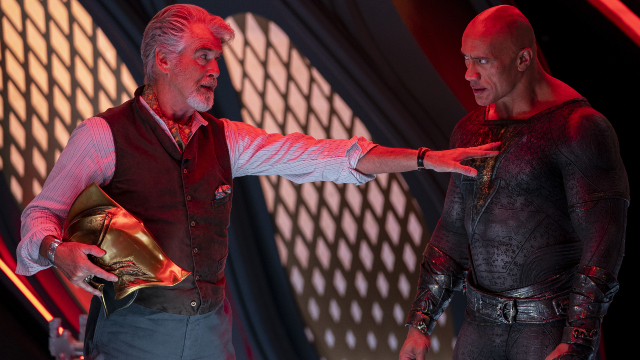 In some ways, Black Adam is truer to superhero comics in general than many other adaptations. In that it’s almost nothing but superheroes flying around and using powers to smash things. Johnson often talks a big game about giving the fans what they want. In practice, it’s like giving a little kid what they want, when they just keep saying “candy” over and over. Adjusting upward for the more likely demographic, Black Adam is the cinematic equivalent of a Mountain Dew suicide mix. It’s full of colorful things that fizz and pop, it gets your heart racing, and you’ll have little idea where any of the flavors came from, except feeling fairly certain they don’t exist in nature.

There’s no real plot to speak of — if you’ve seen even a single TV ad, that has as much story as the entire film. Forget any character backstories besides maybe a single sentence per character. Anyone not familiar with Hawkman, for example, will not learn why he has wings and a gold bird outfit. (They will, however, see his mansion with a Blackbird-ish jet underneath the grounds and briefly take a second to remember this can’t be the X-mansion, because that’s Marvel.) To the extent that any non-comics readers figure out Dr. Fate’s deal, it will likely be due to his similarity to Doctor Strange.

Director Jaume Collet-Serra, a frequent (and mediocre) Johnson collaborator, clearly looks to evoke the Snyder-verse, with the slo-mo/speed-up action, excessively narrated story, and ancient history flashbacks full of shirtless musclemen. Augmented with the constant sturm und drang of Lorne Balfe’s painfully loud and unsubtle score, and bits of character humor that recall some of Michael Bay’s worst instincts, this still feels like a DC movie, all right. But even the likes of Snyder and Bay have a purpose; Collet-Serra simply seems like he’s spending a huge budget on things that look cool without even wondering why they are, or what they mean. To cite a minor example, masked superheroes repeatedly reveal their real faces to everyone, rendering their headgear nigh-pointless.

It won’t shock anyone who has been paying attention to know that Shazam’s arch-villain from comics has here been rendered a badass good guy whose worst trait is that he occasionally gets excessively angry and kills terrorists. That’s enough to make the even more virtuous good guys in the Justice Society fight him, of course. And there’s the germ of a theme about how global super powers ignore the Middle East when it needs help, until it threatens to explode into a larger war. However, while Marvel Studios went out of their way to be fair to Egypt in Moon Knight, for example, DC just uses the fictional nation of Kahndaq, so nobody can accuse them of cultural insensitivity to people that don’t exist.

Rest assured, the hierarchy of power in the DC movie universe has not changed. It still resides in Viola Davis’ Amanda Waller, the primary connective tissue between all the cinematic DC characters. Johnson’s not wrong to suggest many other movies could be spun out of Black Adam; Warner Bros was just wrong not to greenlight those first. The maybe-puppy love between gorgeous twentysomethings Cyclone (Quintessa Swindell) and Atom Smasher (Noah Centineo) could be its own separate story, as could any kind of background for Hawkman (Aldis Hodge) or Dr. Fate (Pierce Brosnan). Hodge and Brosnan are strong enough actors to suggest fully lived-in characters, but knowing them before they started getting punched by Black Adam might have been more helpful.

Johnson’s arc as a movie star and media personality has lately, and ironically, felt a lot like his WWE tenure as Rocky Maivia. In other words, lots of smiling, waving, and coasting on legacy. That run ended with a heel turn that changed everything, and playing a villain could have done the same as a career move. Instead, like John Cena at his peak, Johnson is too much of a product-mover to risk messing with his nice-guy persona, and in real danger of becoming a bore. As Adam, he weirdly disarms his own greatest weapon by talking a lot less than usual; a move seemingly out of the Arnold Schwarzenegger playbook. Arnold, though, used few words because of his strong accent. Johnson, with no explanation, plays an ancient Kahndaqian with a perfectly modern American accent and vocabulary.

This does feel like a bit of a throwback for the wrestler-turned-actor, who made his big movie debut as an Egyptian-ish immortal villain in The Mummy Returns, swiftly turning him into a good guy for the prequel, The Scorpion King. Black Adam is basically the Scorpion King with tights and a cape, and both of their movies are essentially a WWE pay-per-view. Sure, there are writers, just as WWE Raw has them, because the characters have to talk sometimes. But the majority of the work comes from the folks in charge of the fights and effects.

Though it fits more neatly into Shazam! movie continuity than expected, Black Adam is nowhere near the movie its predecessor is. On a side note, it’s hilarious that Johnson worked out like a madman to achieve the same look Zachary Levi obtained with a padded costume. As a showcase for superheroes doing superhero fights, however, it’s effective and fun. Probably forgettable in the long run, but an enjoyable-enough mindless smackdown for the moment.