It’s billed as the first all-CG direct-to-video DC animated movie, although its own making-of featurette contradicts that: Batman and Superman: Battle of the Super Sons adds hand drawn elements to its 3D renderings in a manner that looks like cel shading, and keeps it feeling like a comic book brought to life. As an improvement on the Archer-ish style Warner Bros. has been using, it’s the best these movies have ever looked, and justifies the 4K option more than ever. But if it were only a visual upgrade, that wouldn’t be enough.

But after the dismayingly flat Green Lantern: Beware My Power, Battle of the Super Sons marks a strong comeback for these DC animated movies. It’s only 79 minutes long and the story is so simple that it’s impossible to spoil. And the film remembers, crucially, that comics are fun. Or they should be. 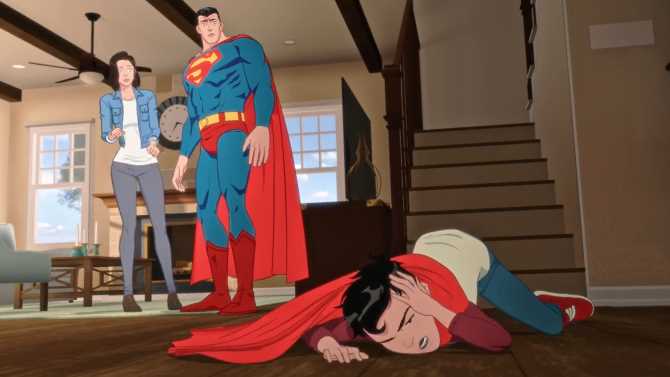 Fans have certainly assumed that the DC animated films since Man of Tomorrow take place in the same universe, but that’s neither clear, nor necessarily official. As such, and possibly because it just looks cool to do it in CG, this movie opens with Krypton blowing up, again. Like Martha Wayne’s pearls, DC films will never tire of showing this every different way they can. In an opening credits sequence that reproduces four-color page art style with all the printer dots, broad strikes establish this Superman. In a world where both his parents died, Clark is married to Lois, and their 13 year-old kid Jonathan doesn’t know the truth about his dad. Instead, Jonathan thinks his father is just a frequently absent workaholic.

However, there is a twist to baby Kal-El’s escape from Krypton this time. A Starro spore that Jor-El was apparently content to keep in his home aquarium attached itself to the rocketship, only to let go somewhere between the red sun and Earth. Now that Superman is a father, so is Starro, sort of. A father of many, many parasites. In a gross-out touch (and it’s amazing James Gunn didn’t think of using it first), these Starro spores hang out in their hosts’ mouths, to get periodically vomited out and on to their faces. When the spores swiftly possess an unprepared Justice League and Teen Titans — apparently the only heroes in this universe — Damian Wayne and a newly aware of his heritage Jon Kent become the last hope for humanity. 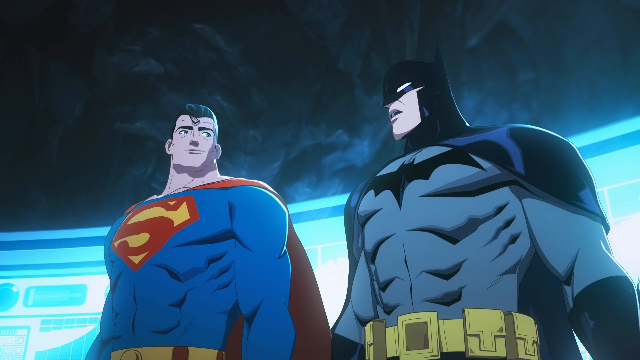 That’s pretty much it. They go to fight Starro. No major surprise twists or developments happen — just some fights along the way. In that sense, Battle of the Super Sons feels almost more like a series pilot than a standalone movie. It would be a series worth watching, if only for the dynamic between Jack Dylan Glazer’s Jon and Jack Griffo’s Damian. It’s all too easy to play the latter as just a destructive brat, but Griffo takes that as just a starting point and digs deeper. Glazer, meanwhile, conveys how fun it is for a kid to suddenly develop a power or several — a metaphor for puberty, yes, but for once dealing with the upsides of being a superhero.

RELATED: Mattson Tomlin Will Co-Write The Batman 2 With Matt Reeves

It’s weird in the post-Snyderverse to see Batman and Superman behaving just as regular super-friends as they did in the Silver Age, but perhaps no weirder than their especially angular abs this time around. Nonetheless, Super Sons suggests it might be time to let the dads sit back for a bit so the kids can take center stage. Buddy cop movies haven’t been a thing for a while, but maybe mismatched buddy superhero flicks can be.

For a movie that touts and boasts a new visual style, it’s a bummer that the sole new Blu-ray extra doesn’t delve into it much. Instead, it focuses on the personalities of the two leads primarily, up to and including a psychologist to discuss their issues. It’s a highly skippable featurette, augmented with two older Ra’s al Ghul bonus cartoons that most Batman fans probably already have.

Super Sons itself, though? Super fun. Please keep up this aesthetic and tone, DC.

Batman and Superman: Battle of the Super Sons comes out today on 4K and Blu-ray.

Josie Campbell explains how Supergirl's outsider status is what drew her to write the latest DC animated original movie.
Movies 1 week ago

In the upcoming Legion of Super-Heroes animated movie, Supergirl assumes that Brainiac 5 is her enemy, and acts accordingly.
Movies 1 week ago

Supergirl fights alongside the heroes of the 31st century in the first trailer for DC's upcoming animated feature.
Movies 3 months ago