Hellraiser Review: Can We Give It a Hell Yeah? Maybe

Longtime Hellraiser fans, who have suffered a great deal through some of the most mediocre, missing-the-point sequels in any horror movie series ever, have good reason to be nervous about a new one. New filmmakers have made promises for years, and seldom kept them. But the last proper sequel, Hellraiser Judgment, at least played like the best low-budget Spawn movie Todd McFarlane will never really make. With the latest installment/reboot, simply entitled Hellraiser, long stretches of young actors wandering through darkened rooms may trigger old fears, and not for the better. Will this just follow the pattern of previous entries which had Pinhead show up at the end only?

Patience matters. The new movie, which runs just over two hours with credits, really ought to be 90 minutes at most. It mistakes spending time with characters for actually developing them. Once the second hour fully unleashes the Clive Barker-ness of it all, however, it doesn’t let up. And it’s not just physical torture — these Cenobites understand that mental torture is just as significant as the physical. “Enough is a myth!” might become their new signature quote. So perhaps it’s their fault you have to suffer through unnecessary backstory in order to get to the good stuff.

Then again, this bunch tend to miss the pleasure side of “pleasure and pain,” being nearly all S and no M. It’s implied they trick people by luring them with pleasure and switching out pain instead. Clive Barker, however, saw the two as intertwined. His creations may seem designed to frighten, but to him they’re equally meant as twisted turn-ons. More so than mislabeled captivity horror like Saw, Barker’s books enmesh torture and porn. In casting a female “Pinhead” (here billed as The Priest) director David Bruckner seemed to understand that. In execution, it’s not clear he does. There’s nobody here like Hellraiser I and II’s Frank or Dr. Channard who visibly gets off on what the cursed puzzle box offers. 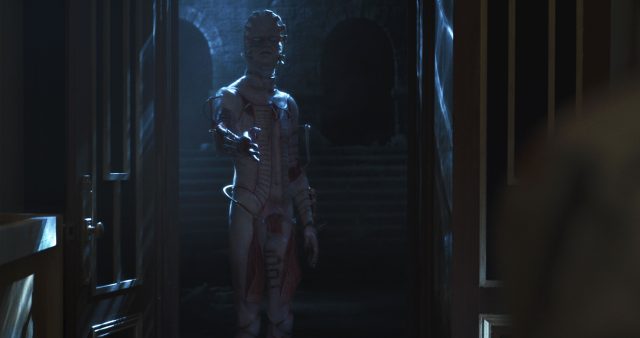 One arrives eventually in this retelling, but it takes a long time; almost as long as it does for The Priest (Jamie Clayton) to give us more than a split-second appearance. In the meantime, not-so-recovering drug addict Riley (Odessa A’zion) wonders if the things she’s seeing derive from the pills she took, or actually came from that stolen puzzle box she just played with. When she accidentally draws blood from her brother (Brandon Flynn) with it, and he promptly disappears inside a bloodstained bathroom, Riley determines to find out exactly why. 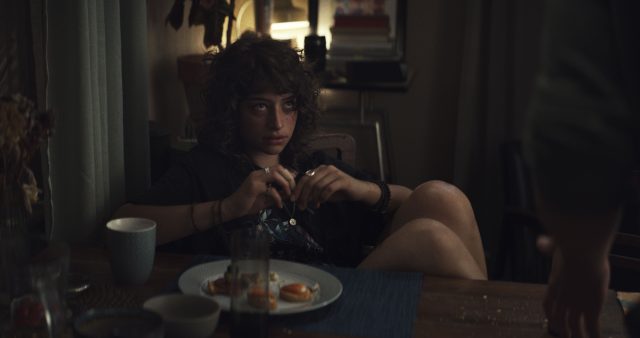 Prior to any villain emerging, it’s hard to get all that horrified or tense by what’s onscreen. Once you know the Cenobites only come when summoned, empty, dimly lit buildings don’t feel fraught with danger. Reveal the bad guy sooner, and there might be more things to fear. Riley’s self-destructiveness isn’t that terrifying. She’s not so sympathetic that we worry much about her. Except to the extent she might accidentally harm others.

There seems to be a mildly bigger budget in play here than in some other Hellraiser sequels, but not necessarily by a lot. Amusingly retro-style storm clouds and lightning flashes look very ’80s-era old-school. CG does effectively help with the unfolding of dimensional doors from our reality, but the makeup seems viscerally, brutally practical. These newer Cenobites prefer white clothing to black, as it’s all the better to stain with fresh blood. Besides The Priest, however, only Chatterer from the first film got upgraded. The rest feel like variations on the McFarlane Toys Tortured Souls figures series 2, designed by Barker. 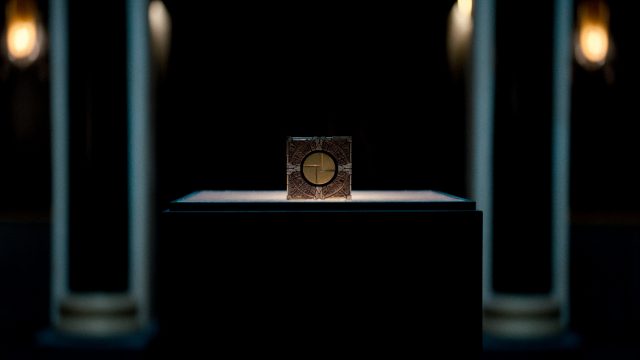 Just to be clear on the comparisons here, the first Hellraiser remains unsurpassed. Hellbound and Bloodline are decent sequels. Hellraiser III‘s an okay, dumbed-down slasher version, and Judgment is enjoyable Pinhead-as-Spawn (with John Gulager as a version of the Clown, no less). The new one falls somewhere around the underrated Bloodline, quality-wise, with potential for more. Its second hour is so strong that fans may wish the filmmakers had massaged the first hour a lot more. In fairness, that’s preferable to the numerous horror reboots that whiff the ending.

This Hellraiser, back under Barker’s relative control, is also the most openly LGBT-positive installment, with a sympathetic gay couple front and center, and a trans-female lead Cenobite. Bondage and body-modification positivity, however, just might be a step too far Disney/Hulu. But for once, the inevitable sequel tease is both intriguing and a satisfying bit of closure on the arc at hand.

After playing Pinhead in Clive Barker's first Hellraiser movie, Doug Bradley is applauding Jamie Clayton's turn as the character in…
Movies 4 months ago

Hulu has released the first trailer for its upcoming Hellraiser film, revealing new looks at Jamie Clayton's Pinhead and her…
Movies 5 months ago

Jaime Clayton appears as the new Pinhead in one of the first official images from the upcoming Hellraiser movie, which…
Movies 5 months ago

Your soul gets torn apart this October.
Movies 5 months ago
Loading Comments...