With its seventh episode, The Dark Crystal: Age of Resistance entered intriguing territory. And we’re not just talking puppet meta. No, the journey to the Circle of the Suns revealed a founding truth about the Skeksis, Mystics and Thra itself. One that could spell the end of Skeksis rule and bring the seven clans into harmony. Even with goth Seladon on the All Maudra’s throne. But the Skeksis won’t take any threat lying down. Not when Thra remains in their talons. 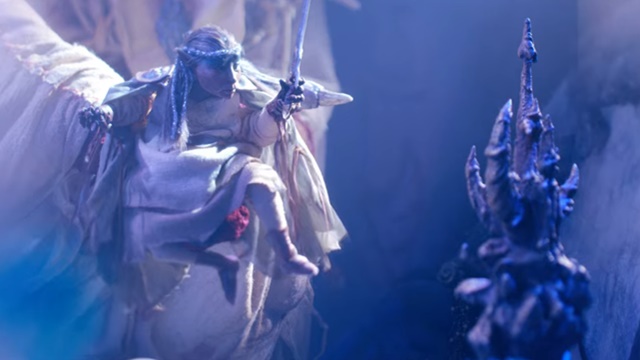 Rek’yr drops off Brea, Rian, Deet, Lore and Hup at the foot of the mountain housing the Circle of the Suns. He warns of approaching sandstorms before leaving, and it isn’t long before one descends on the crew. They all pile onto Lore as he climbs the mountain to safety, depositing them at the threshold of their destination. They’re greeted by a benevolent Skeksis known as the Heretic and his Mystic partner, urGoh. The Heretic is the one that created Lore and, with his task done, removes the talisman from Lore’s mouth to let him rest. He confirms the power to defeat the Skeksis lies with him, but he has a surprise to deliver before he reveals that.

That surprise turns out to be a lesson on the true history of Thra, delivered via opera and puppetry. The Skeksis and the Mystics are actually two halves of one whole formally known as the UrSkeks. They came to Thra from another world and deceived Aughra for control of the Crystal of Truth. But their experiments on the crystal caused themselves to split. Cracking the crystal created the Darkening. All they want is to return to their true form, but the Skeksis kicked the Heretic out of the castle, giving him his current moniker.

But neither the Heretic or urGoh can end Skeksis rule. Their fate lies in the hands of the Gelfling and a powerful blade known as the Dual Glaive. It holds the power to unite the seven clans and defeat the Skeksis Under the Aureyal, the Gelfling become a cleansing flame. But they don’t have the Dual Glaive. It’s being kept safe in the Caves of Grot. 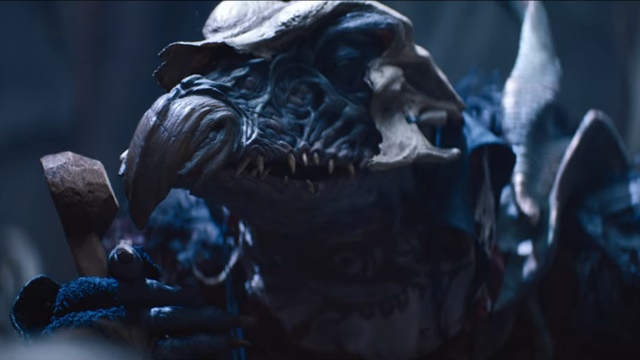 The Hunter remains on the prowl for the Gelfling, confronting Rek’yr and his crew. Rek’yr refuses to tell where he left the heroes, but his crew isn’t so stubborn after the Hunter kills one of them. He crashes the party just as Rian and the Heretic are about to shake hands. Brea tries to wake Lore, but the talisman has trouble working. The group is saved by the arriving urVa, the Hunter’s Mystic partner. The Hunter can’t kill urVa as he will feel any pain inflicted on urVa. Instead, The Hunter retreats, taking Brea hostage. 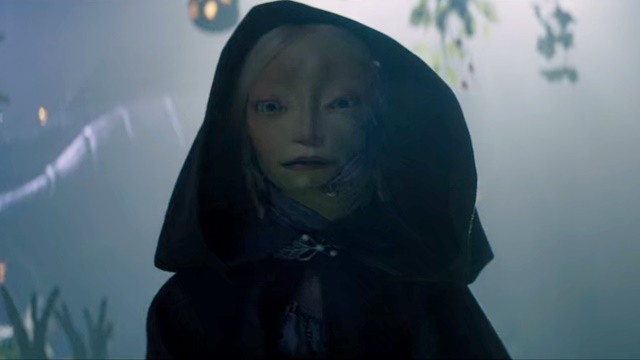 The Skeksis aren’t taking the Gelfling uprising lightly. Wanting to squash it before it even begins, skekSo makes a deal with the Arathim’s hive mind, the Ascendancy. He’ll return their ancestral home, the Caves of Grot, in exchange for fighting the Gelfling. The Ascendancy agrees though they don’t necessarily have to fight. They request a strong Gelfling to show what they mean. SkekVal chooses Tavra as tribute.

But skekSo’s deal is actually a double-cross. He reveals both the Darkening and its effect on his body to skekVal. The Emperor has fashioned a staff with a crystal that harnesses the Darkening’s power. The Darkening is also infecting the Caves of Grot, making the Arathim’s reward more like a grave.

Regardless, the alliance proves fruitful when skekVal leads the Arathim to the gates of Stone-in-the-Wood. Fara, recently warned of attacking the Crystal Castle by Aughra, prepares for the fight, but no one attacks. Instead, a black-cloaked Tavra silently approaches. But this isn’t Tavra. She is indoctrinated into the Ascendancy, and soon all of Stone-in-the-Wood will be too. Tavra unleashes a swarm of threaders into the village, indoctrinating all as Aughra watches. They are all the Ascendancy.

What did you think about The Dark Crystal: Age of Resistance season 1 episode 7? Share your thoughts with us in the comment section below!