The Hunter lies dying and a damning masquerading as an alliance with the Arathim met an ill fate. To say things aren’t going well for the Skeksis would be an understatement. The Dark Crystal: Age of Resistance’s namesake finally started to come to fruition, but not without a hefty sacrifice from Aughra. The union of the seven clans is on the horizon, but it could also prove to be their last stand. 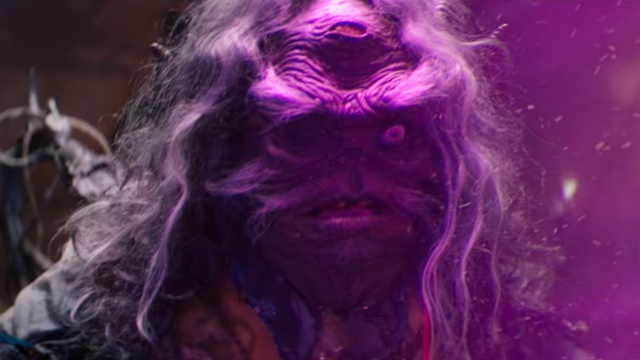 With the Hunter clinging to life, the Skeksis prepare to drain more essence. Lucky for them, they have three of the most vigorous and powerful Gelfling in their grasp: Seladon, Brea and Fara. The three are strapped in but Aughra enters before skekTek can flip the switch. She offers herself in place of the Gelfling, providing them with the essence of Thra itself to save the Hunter. SkekSo agrees to the deal out of fear of the afterlife, freeing all the Gelfling in their prison. But not without a contingency in the form of skekVal.

Tavra reveals the Gelfling/Arathim alliance to Brea and Seladon as they make their way through the catacombs. They’re soon met by skekVal and skekLach. No Gelfling leaves the castle alive. Tavra stabs skekVal as the Arathim arrive. SkekSil stabs Tavra in response, giving skekVar enough essence to heal his wound. Tavra’s sister find her and escape the castle with the rest of the Gelfling. Her wounds are too dire, though, and Tavra passes in the embrace of her sisters far from the castle.

Aughra is strapped in, lamenting the dissolution of her relationship with the Skeksis. Their crimes against the crystal have doomed them a future of dust. Her comments don’t stop the draining, killing her but failing to resurrect the Hunter. He orders the Hunter’s body dressed in his armor and prepped to be hung in the throne room for all eternity. 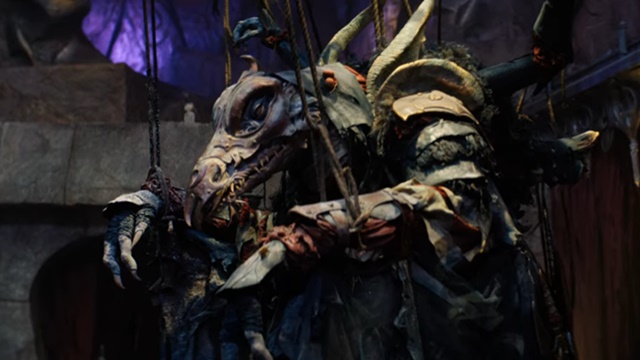 Deet awakens to find the Grottan and Arathim safe above ground. The Darkening averted, Rian is ready to re-enter the Caves for the Dual Glaive. But it’s actually closer than he thinks. Argot reveals her walking stick to be one half of the weapon in disguise. She gives it to him and directs him to find the other half in Stone-in-the-Wood. That is where the last to wield the blade, Ordon, hid it after battling the Arathim.

Back at the castle, skekSil pitches a new plan to the Emperor after the Skeksis are left without an army. They can build one by reanimating dead Arathim as soulless warriors. SkekSo agrees, commanding skekTek to build his army and offering skekSil his place at his side once again. 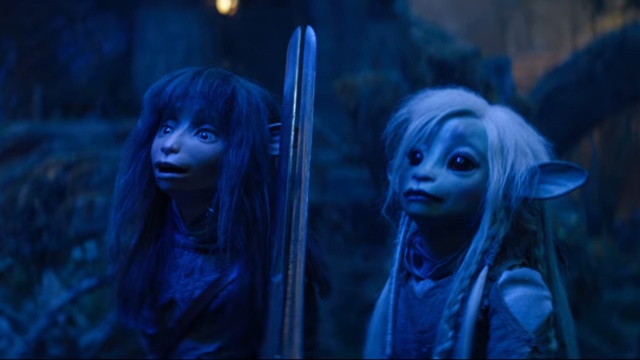 Deet and Rian find Stone-in-the-Wood desolate. The only sign of life is the fire of the forge where Stonewood warriors deposit their weapons after battle. The other half of the Dual Glaive is hidden in the forge. Rian retrieves it without burning himself and reforms the blade. The Dual Glaive restoration causes the forge’s flame to burn blue. All other flames within Thra follow suit, allowing Rian to speak to all Gelfling at once. The Skeksis are able to listen too via the crystal. The Hunter’s body stirs as they rush to the crystal chamber.

Rian tells all Gelfling about the Skeksis crimes. The Lords of the Crystal have turned against us. They’ve turned against Thra. The time to rebel is upon them. He reveals he has the Dual Glaive to the shock of the Skeksis. Rian calls for all Gelfling to assemble at Stone-in-the-Wood and stand as one against their oppressors. SkekSo warns them of fighting their rulers, but Rian stands unmoved. The communication window closes and skekSo tells the Skeksis to prepare to crush the Gelfling at dawn.

What did you think about The Dark Crystal: Age of Resistance season 1 episode 9? Share your thoughts with us in the comment section below!