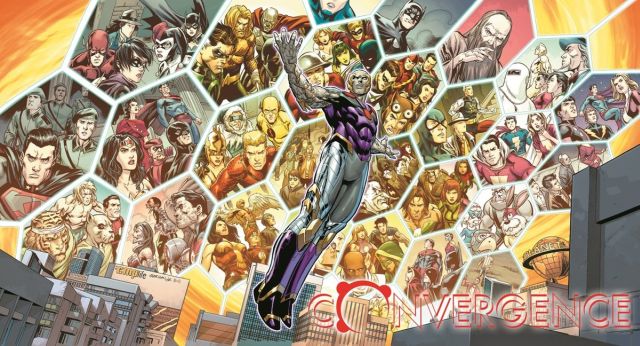 DC Comics continues to reveal the 40 tie-in comics for their summer 2015 event “Convergence.” The first 10 revealed the return of fan favorite versions of Batgirl, The Question, and more, and the second batch showed a world were the ’90s ruled again as “Knightfall” era Batman and the “Zero Hour” DCU made their return. Now, the third list of ten titles have been released (via IGN and Nerdist) and it features the likes of the Legion of Superheroes, the Red Rain Vampires, and the savage world of Kamandi. Read the full list and check out the promo art below!

BATMAN AND THE OUTSIDERS
Writer: Marc Andreyko
Artist: Carlos D’Anda
Colorist: Gabe Eltaeb
After a year under the dome, the Outsiders have gone their separate ways, but when OMAC attacks, Batman must find out if they have what it takes to still be a team.

ADVENTURES OF SUPERMAN
Writer: Marv Wolfman
Artists: Roberto Viacava and Andy Owens
Colorist: Sotocolor
Superman and Supergirl try to escape the city through the Phantom Zone, but they enter a portion they’ve never seen before and learn that Supergirl is destined to die if they return to their proper time and dimension. True story.

THE FLASH
Writer: Dan Abnett
Artist: Federico Dallocchio
Colorist: Veronica Gandini
Trapped in Gotham, Barry Allen has nowhere to run. He fights on, seeking justice as well as a way to save the city. But he faces a Tangent Universe foe that thinks faster than the Flash could ever move.

WONDER WOMAN
Writer: Larry Hama
Art and Color: Josh Middleton
White-jumpsuit-clad Diana Prince is in the grips of a Domesday cult when her lover Steve Trevor leaps into the fray to save Etta Candy from vampires of Red Rain.

GREEN LANTERN CORPS
Writer: David Gallaher
Artists: Steve Ellis and Ande Parks
Colorist: Hi-Fi
Say the Oath, save the world! If only being the Green Lantern Corps was that easy. Hal has resigned, John is busy, and Guy is pissed. Together for the first time—they’ll save Gotham or die trying.

SUPERBOY AND THE LEGION OF SUPER-HEROES
Writer: Stuart Moore
Artists: Gus Storms and Mark Farmer
Colorist: John Rauch
While Brainiac 5 struggles to break through the dome, Superboy tries to keep the Legion of Super-Heroes spirits up—but then the Atomic Knights ride into town.

NEW TEEN TITANS
Writer: Marv Wolfman
Artists: Nicola Scott and Marc Deering
Colorist: Jeromy Cox
Titans Together! Fighting against the might of the Tangent Universe’s Doom Patrol, we are reminded why this is the greatest Titans team of all.

HAWKMAN
Writer: Jeff Parker
Artists: Tim Truman and Enrique Alcatena
Colorist: John Kalisz
Hawkman and Hawkgirl put their Shadow War on hold as they face the anthropomorphic might of rat-men and bat-men in the deadly land of Kamandi!

“Convergence” is set to begin on April 1 of 2015 and run through May 27. It will be written by Jeff King of “White Collar” and “Stargate SG-1″ fame with help from Dan Jurgens on the zero issue and an outline from Scott Lobdell. The event will also feature forty 2 issue tie ins running in place of the regular “New 52” comics in April and May. George Perez, a true icon in the comic book industry, has passed away at the age of 67 following a…
Comics 9 months ago

Jon Kent will take over as Earth's next Superman in a new ongoing series from writer Tom Taylor and artist…
Comics 2 years ago
Loading Comments...