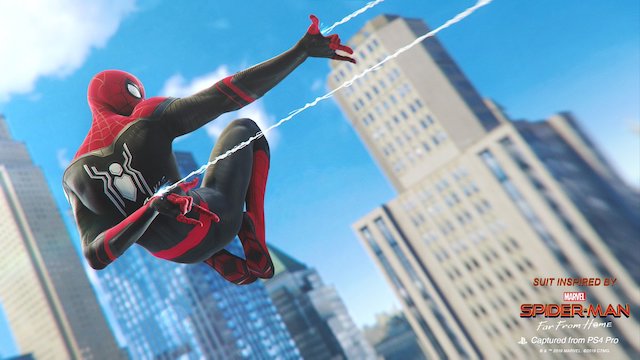 The latest big-screen Spider-Man adventure, Far From Home, arrives in theaters today. But that isn’t the only place where fans will be able to see the webslinger in action with his latest suits. In a free update that’s also available today, Insomniac Games has announced two new suits for Spider-Man PS4. This includes both the Upgraded Suit and the new Stealth Suit, both of which have been seen in trailers.

“While we’re busy working away here at Insomniac Games, we couldn’t pass up the opportunity to once again team up with Sony Interactive Entertainment, Marvel, and Sony Pictures Entertainment to celebrate the release of Spider-Man: Far From Home in theatres now!” said James Stevenson, community director for Insomniac Games. “As such, we have released a new update for the game via Patch 1.16 that will bring two free brand-new suits from Spider-Man: Far From Home to the game.”

“After you have built the Advanced Suit early in Marvel’s Spider-Man, you are able to switch between suits during the story — so if you have already reached this stage in-game, you can use the Spider-Man: Far from Home Upgraded Suit, or the Spider-Man: Far From Home Stealth Suit right now,” added Stevenson.

The Upgraded Suit can be seen in action above, and the Stealth Suit is below. 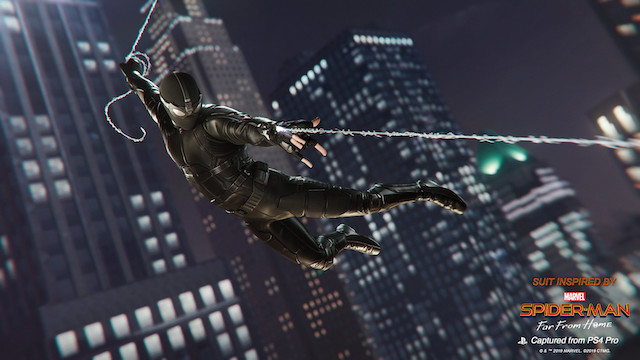 Over the past few months, Insomniac has patched in a number of fan favorites including Spidey’s Fantastic Four costumes, the classic Sam Raimi-inspired Spider-Man suit, and several others.

There’s no word yet about whether any more costumes will come to the game, but Stevenson did thank the fans.

“We’d like to thank all of you for your support of Marvel’s Spider-Man since its launch last September,” said Stevenson. “Many of you have played, and we have been floored by the response to the game. It has been gratifying to continually hear new stories from players exploring our rendition of Marvel’s New York with the web-slinger and see all of the great shots you have created in Photo Mode.”

Spider-Man is available now for PlayStation 4. Which of these new suits will you try out first? Let us know in the comments below!

The original big-screen Spider-Man, Tobey Maguire, looks back at the call and invite to reprise his role in Spider-Man: No…
Movies 2 weeks ago

Miles & Gwen Reunite In New Spider-Man: Across the Spider-Verse Trailer

The new Spider-Man: Across the Spider-Verse trailer brings Miles Morales and Gwen Stacy back together in a world of trouble.…
Movies 2 months ago
Loading Comments...