[Spoiler] Talks About His Role In Obi-Wan Kenobi Finale

Warning: There are spoilers ahead for Obi-Wan Kenobi episode 6!

During the Obi-Wan Kenobi finale, another cast member from the Star Wars prequel trilogy made his return. Liam Neeson briefly reprised his role as the legendary Jedi, Qui-Gon Jinn, the man who trained Obi-Wan. Neeson originated the role in 1999’s Star Wars Episode 1: The Phantom Menace. However, Qui-Gon’s life was taken by Darth Maul, and Neeson only returned for a vocal cameo in Attack of the Clones. Regardless, Yoda told Obi-Wan that it was possible to commune with Qui-Gon from beyond the vale in Revenge of the Sith. Obi-Wan Kenobi finale.

Ewan McGregor’s Obi-Wan tried to make contact with his lost mentor multiple times during the miniseries. But it was only in the closing moments that the two were reunited. Via The Hollywood Reporter, Neeson explained why he finally reprised his role in live-action.

“I certainly didn’t want anyone else playing Qui-Gon Jinn, and I wanted to show my respect for George [Lucas] and that mythical world that he created,” said Neeson. “Plus, Ewan [McGregor] is a pal, and I loved working with him during The Phantom Menace 25 years ago.” 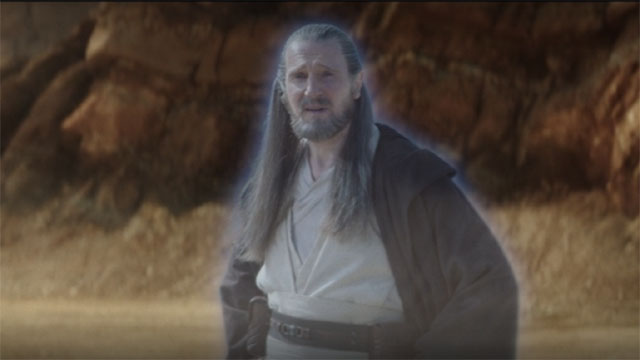 RELATED: Obi-Wan Kenobi Episode 6 – What Did You Think?!

Neeson also lent his voice as Qui-Gon in three episodes of Star Wars: The Clone Wars, and he made a vocal cameo in The Rise of Skywalker as well. Additionally, it was announced at Star Wars Celebration that Neeson will voice Qui-Gon in the upcoming animated anthology, Tales of the Jedi. Neeson’s son, Micheál Richardson, will also voice a younger Qui-Gon in Tales of the Jedi.

For now, there are no plans for a second season of Obi-Wan Kenobi. But if Lucasfilm goes forward with it, the door is open for more appearances by Neeson in the future.

Were you happy to see Neeson back as Qui-Gon Jinn? Let us know in the comment section below!

"General Kenobi, years ago you served my father in the Clone Wars"
Geek Culture 1 month ago

Star Wars: Tales of the Jedi – What Did You Think?!

Lucasfilm's animated anthology, Star Wars: Tales of the Jedi, is here, and we want to know what you think about…
TV 3 months ago

Bryce Dallas Howard is Voicing Yaddle in Star Wars: Tales of the Jedi

Star Wars: Tales of the Jedi Key Art Previews a New Duel of the Fates

Lucasfilm has released a new poster for Star Wars: Tales of the Jedi that highlights Ahsoka Tano and Count Dooku's…
TV 4 months ago
Loading Comments...