One rarely learns the truth at an opportune time. Such was the case for the heroes of Thra on The Dark Crystal: Age of Resistance. The Heretic revealed the location of the Dual Glaive just as the Skeksis/Arathim alliance drew the Stonewood into their influence. Even worse, the Hunter made off with Brea. But the Hunter may not be long for the world. His death could cast enough doubt to weaken Skeksis rule, but the true threat looms beyond the Crystal Castle, deep in the Caves of Grot. 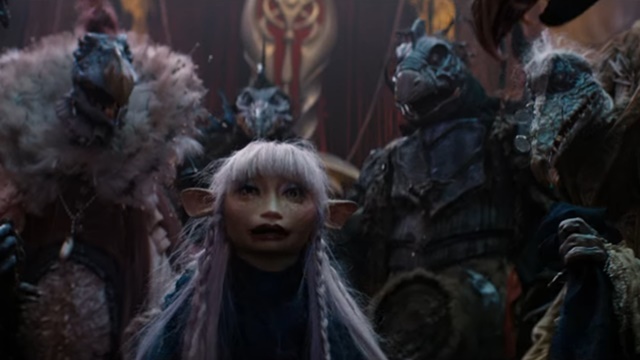 Aughra greets an arriving Seladon after healing a straggling Threader. Seladon is aghast at the state of Stone-in-the-Wood, but chooses to blame Fara for not bending to the Skeksis. She even threatens Aughra, yelling that her vision was wrong. Aughra remains unmoved, noting that her faith in the Skeksis desire for peace is ill-sighted. The All Maudra continues her journey to the Crystal Castle, but Aughra plants her eye on Seladon’s cloak in order to look in.

Seladon enters a Crystal Castle in chaos. SkekTek continues draining the Stonewood mercilessly while skekSil employs his Gruenak slaves to sabotage skekVar’s essence vial. Her requests for the Stonewood’s release and sparing other devoted clans fall on deaf ears. SkekSo openly celebrates their draining of Gelfling to Seladon’s disgust. Rian spoke the truth. But the All Maudra offers up the same sacrifice the Skeksis demanded of her mother. That deal is off the table now, though, as the Skeksis won’t spare anyone. They take her crown and mock her before destroying it, stripping her of her dark robe and damning her to the draining chair. 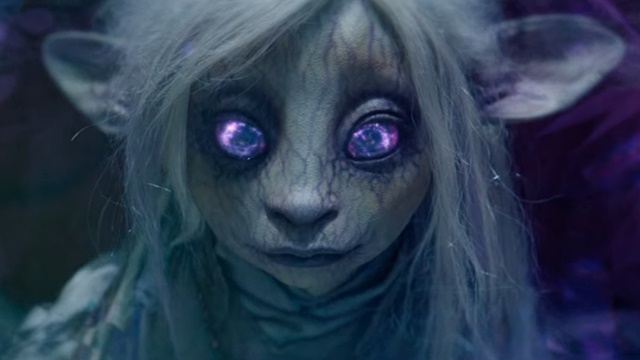 Rian and Deet set out for the Caves of Grot, leaving Hup with the Heretic to recover. They soar through underground tunnels until they come across the Arathim overrunning the Grottan. Deet finds her home ransacked and her young brother, Bobb’n, under the Ascendancy’s control. Bobb’n calls the Arathim to the house, but a corrupted Nurloc attacks. Deet and Rian save Bobb’n from the giant worm before retreating. But the tunnel they crawl through holds Threaders. One latches to Rian, making him hold Deet as one prepares to attach itself. But Bobb’n frees both and asks them to follow him.

The duo meets the Ascendancy and learn that the Caves were their original home before the Skeksis drove them out and allowed the Grottan to live there. They’re taking back their home, but Rian points out the Darkening’s influence within the Caves. The Skeksis doomed them. Deet offers to help them escape if they’ll free the Gelfling and help them fight the Skeksis. All who call the Caves home are Grottan in her eye. The Ascendancy agrees and frees the Grottan before all bolt for the exit.

But the Sanctuary Tree won’t survive the Darkening. Corrupted Nurlocs devour its roots, but it has enough energy left to bestow its power to Deet. She sees a vision of Rian replacing the Crystal of Truth’s missing shard and herself infused with the Darkening before absorbing the corruption out of an attacking Nurloc. Rian carries her to safety, but the vision is already on its way to coming true. 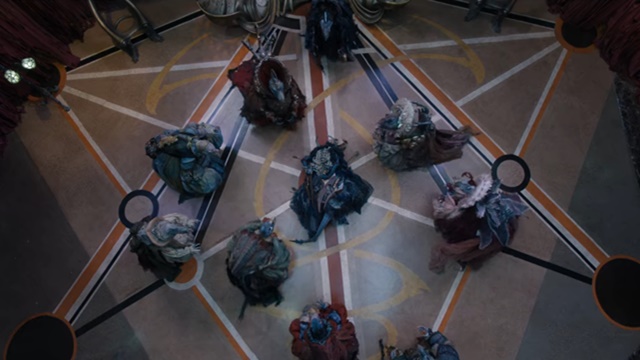 The Hunter barges into the Crystal Castle not long after, carrying a covered cage. He collapses in front of the other Skeksis, clinging to life. The sight of one of their own on death’s door rocks the Skeksis. SkekSo demands all of their collected essence in order to save his life. No one can know the Skeksis are mortal.

The group soon discover Brea in the cage and lock her up with the others, including Seladon. Brea’s sister still lies the blame on her. She pushes back, ridiculing her for believing she chooses who lives and dies. But the arrival of Tavra quiets both. Seeing her under Arathim control brings their voices back. The age of the Gelfling is over.

The healed Threader returns Aughra’s eye to her and speaks of the Gelfling/Arathim alliance. It’s time for Aughra to make her move.

What did you think about The Dark Crystal: Age of Resistance season 1 episode 8? Share your thoughts with us in the comment section below!