It may be a bit cliche, but things are usually their darkest before the dawn. The Dark Crystal: Age of Resistance isn’t exempt from this idiom. Rian finally convinced his father of the Skeksis’ true nature and Brea unlocked a secret to united the Gelfling clans. But neither escaped their epiphanies unscathed. With Rian in the Hunter’s clutches and Brea brought before the All Maudra, Thra’s survival hinged on whether each could spread their knowledge beyond their obstacles. Good thing they have a newly awakened ally on their side. 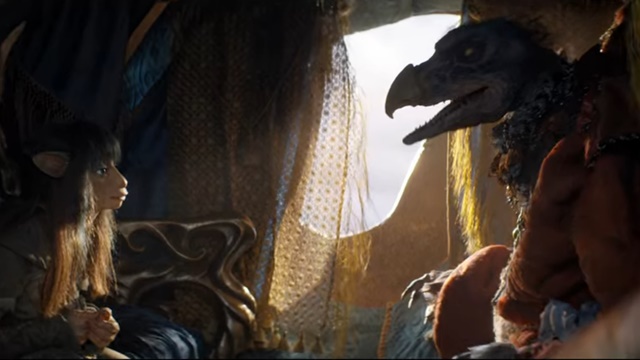 His hunt concluded, the Hunter looks to take Rian’s tongue as a trophy, but skekSil has other plans for the Gelfling. He talks the Hunter down, requesting to take Rian back to the Crystal Castle himself as a way to regain his position at skekSo’s side. The Hunter can take any trophy from Rian after he humiliates skekVar. SkekSil has one more wound to inflict on Rian before they leave though. He takes the vial from Rian and drinks the last of Mira’s essence.

SkekSil explains that Rian will have to publicly tell his fellow Gelfling that he lied about the Skeksis as they head back to the castle. Rian pushes back, condemning their consumption of Gelfling as unnatural. But death is unnatural to skekSil. He beats on Rian’s spirit by pointing out how he keeps running from conflict. Rian can’t save anyone unless he embraces the Skeksis. SkekSil even frees Rian to prove his point. He isn’t going anywhere because he knows any Gelfling rebellion ends in their deaths. Luckily, Rian has friends in high places. Naia and a freed Gurjin descend onto the carriage and rescue Rian, leaving skekSil and his carriage in a heap.

Naia and Gurjin were able to reclaim Rian thanks to some help from Tevra at the Crystal Castle. She and Naia infiltrate the castle, splitting up to finish their missions. Tevra is drawn by a purple glow, catching a glimpse of skekSo pulling power from the Darkening into his staff.

At the same time, Aughra continues to fail in her attempts to hear the Song of Thra. Her frustration boils over when a small creature dies in her grasp from the Darkening. She asks the Sanctuary Tree for aid. It quickly provides such, resurrecting the creature. Aughra takes the lesson to heart. She should sit and listen for the song rather than force it out.

Back in Ha’rar, Sleadon sells out Brea to the All Maudra after hearing her question Skeksis rule. Mayrin is disappointed that Brea abandoned the Order of Lesser Service but to Seladon’s dismay, agrees to speak with Lore at Brea’s request. Mayrin is taken aback by Lore, but chooses to Dreamfast with Brea to learn her daughter’s new knowledge. 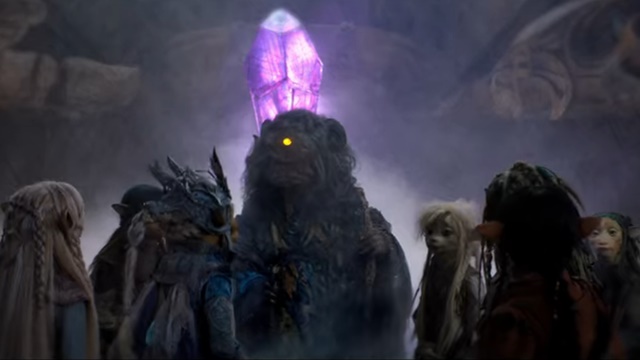 Deet and Hup finally reach Ha’rar after Deet emboldens her near-broken Podling friend. They need an audience with the All Maudra, but they aren’t getting past the gate in their commoner clothing. Hup steals a dress for Deet and talks his way into the palace. But Seladon intercepts them before the meeting can happen. Deet drops the ruse and asks her to Dreamfast so she can share her vision. Rian Dreamfasts with Naia, Gurjin and Kylan and Brea Dreamfasts with Mayrin at the same time, leading all to a meeting with Aughra in the Dream Space.

Aughra charges the group with saving the crystal and Thra, exposing all of them to every foreboding event to date. Seladon accuses Aughra of treason, prompting Aughra to expel her from the Dream Space. She takes the opportunity to rat them out to the Skeksis at the palace. Aughra leaves them with two tasks: Rian must join Brea and Deet in Ha’rar and Mayrin must unite the Gelfling clans.

Mayrin begins her task by standing up to the Skeksis lords trying to take Gelfling volunteers. But Seladon already gave them the heads up. SkekVal kills Mayrin in front of her daughters, guilt clearly overcoming Seladon. But she blames Brea rather than the Skeksis. Mayrin’s death means Seladon is now All Maudra and her first act is to imprison Brea, Deet and Hup. They’re taken by the guards and given to the Skeksis.

What did you think about The Dark Crystal: Age of Resistance season 1 episode 5? Share your thoughts with us in the comment section below!