To keep things simple, our list of the best heroic (and anti-heroic) action figures of 2019 observed the following rules. Action figures must be designed for play as well as display. No imports (Hot Toys and MAFEX are out). Everything under 12-inch scale (no Mondo). They must all be based on superhero, sci-fi, or fantasy properties. And they had to have been released this year. Skin-over-frame figures rarely work. Put a poseable skeleton inside a soft, rubbery body, and usually the rubber cracks, rots, and attracts dust. However, the Hyperreal Darth Vader has not done that. And he holds every pose too. Granted, the fact that Vader wears a full body suit and has capes and armor pieces covering him up makes this an easier execution than a character like He-Man. We’ll watch with interest how the follow-up Luke Skywalker prevails. For now, the metal body under mixed media seems like it could be a major breakthrough. Time will tell. Tron action figures have come and gone since the very first movie. But screen-accurate toys with actual 1982 actor likenesses are new. Following a successful inclusion in Diamond Select’s Kingdom Hearts line, the Tron characters got their own spin-off. Thus far, bare-bones figures have hit Walgreens, with more deluxe versions coming next year. But they’re finally what we’ve wanted for decades, in any form. As a bonus, Disney’s approval led to them allowing Diamond to do even more figures “from the vault.” To that end, look for The Black Hole and The Rocketeer toys in 2020. Collectors love toys that look screen-accurate. But what happens when what was on the screen was a super-cheesy, exposed-zipper kind of costume? In taking over Power Rangers, Hasbro actually made figures that look better than the real thing. Lord Zedd was always a cool design, cheaply executed. With his exposed anatomy, infused tubes, and metallic exoskeletal parts, he would have been terrifying if he had looked even remotely real. Well, Hasbro made him look real. This figure looks like a genuine alien villain, rather than a man in suit. Fit to stand beside Star Wars and Marvel in evil glory. Pan’s Labyrinth has deserved toys since it came out 13 years ago, but R-rated foreign-language fantasies don’t usually score U.S. licensing deals. Credit Guillermo Del Toro’s pre-existing relationship with NECA over Pacific Rim. Now, they’re making all the monsters that the director retains the rights to. And the creepiest of all is the Pale Man, with his hand-eye coordination from hell. Complete with throne and plate, this metaphorical embodiment of greed shows just how loathsome and terrifying the worst kinds of adults appear through the eyes of a child. And he’s fully poseable too. We can tell that the gang at NECA have longed to do a comics-based Batman figure. For years they’ve desperately tried to find the legal loopholes that might allow them any part of the license yet unclaimed. They briefly found it in an Aliens crossover comic, and gave us a fully jacked, Simon Bisley-esque Batman as a convention exclusive. The body was reused for Superman and Green Lantern, but Batman carries it best. Sweetening the deal, the Alien he came packed with has a Joker-style paint job. And featured a new-this-year body based on Alien Resurrection, with improved articulation and longer digits. On the cusp of having to hand over DC Universe collectible figure rights to McFarlane, Mattel outdid themselves. Sure, a comic-based Alfred is a neat figure to have. But what makes it even better is the inclusion of two live-action likenesses. From the 1966 TV show, an Alan Napier alternate head. And from the 1989 movie and its three sequels, a Michael Gough head too! Not only that, but the actor likenesses are the best Mattel has ever done since getting the DC license. It may be too little, too late for the company, but no Alfred or Batman fan should pass this toy up. 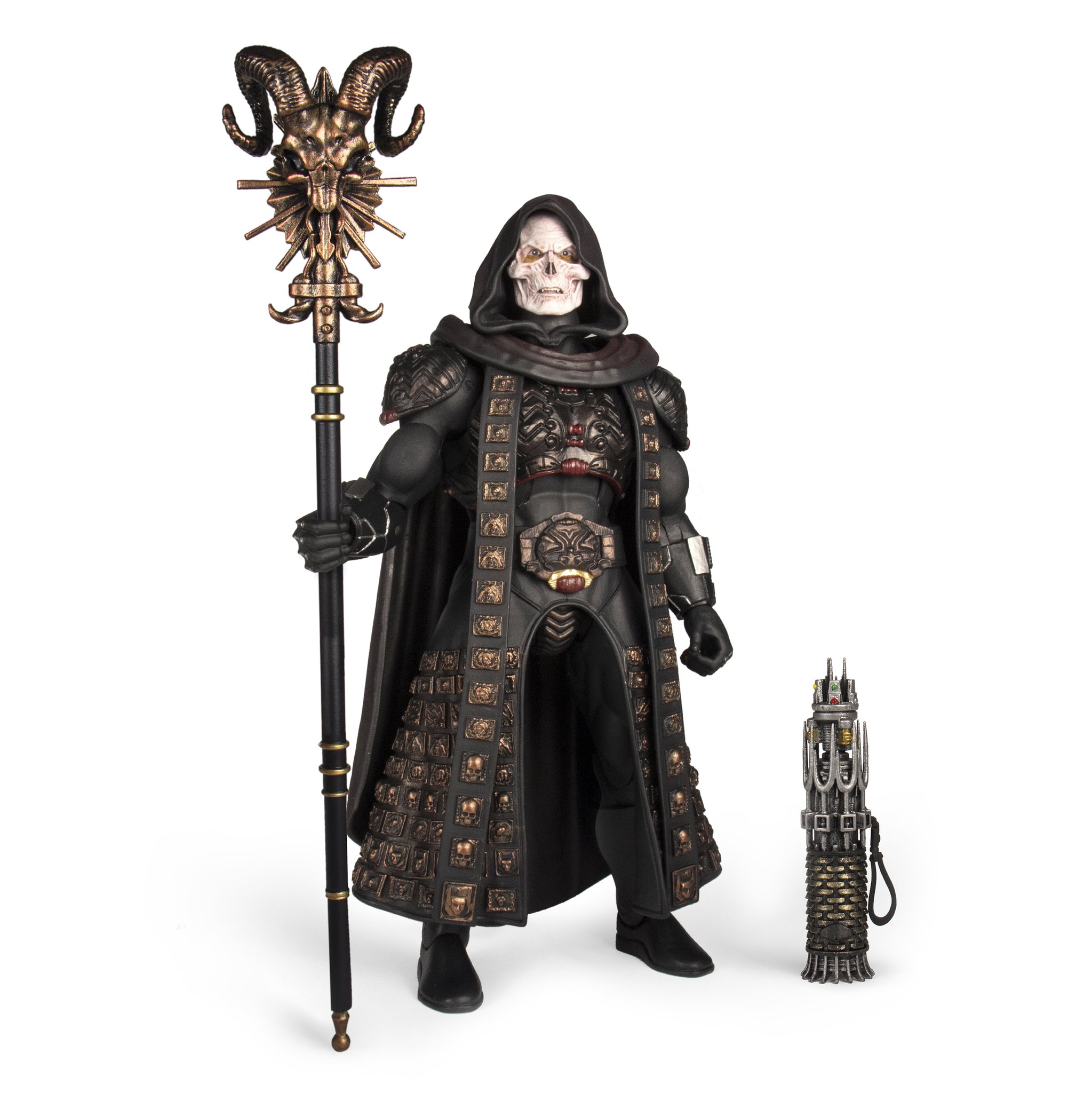 Shipping into homes just under the wire at year’s end, Frank Langella’s version of Eternia’s top heel finally received plastic justice. In the final wave of Masters of the Universe Classics, Super7 did a clever runaround to make figures from the 1987 movie. Movie merchandising rights were too expensive, but William Stout still owned his original costume designs, and the actors control their likenesses. The toy geniuses negotiated for both, and made the Skeletor toy we thought we’d never see. The 1990 movie incarnation of the Teenage Mutant Ninja Turtles’ arch-enemy remains one of his most popular designs. Having already sculpted those turtle boys into the coolest TMNT figures ever, NECA finally got to the big bad. And he was above and beyond what most fans hoped, with a one-way translucent shiny cape, metallic shirt sheen, and removable mask. A Comic-Con multipack exclusive so far, he is anticipated at Gamestop stores some time next year in a single package. With a shiny metallic finish, intricate costume detail, two separate head sculpts and all the usual articulation ML fans expect, Captain Marvel made a perfect movie figure. As an added bonus, unlike most female figures in the line, she didn’t come with a gigantic build-a-figure torso. That’s the sort of thing that often discourages casual fans. $20 for a small figure and a giant hunk of plastic they’ll never use? Instead, Carol came with an extra head and hands. Perfect for fans of all enthusiasm levels. Bumblebee finally gave O.G. toy fans the Transformers movie they’d always wanted, with (mostly) Generation 1 upgrades. Hasbro, never missing a beat, gave us this year a movie Optimus Prime of our dreams. Classic design, more details as befits a big-screen incarnation, and new transformation. At a $25 price point, he was also more affordable than many Optimuses have been. 2019 also saw a classic animated style Optimus figure. But if you can only get one, the Bumblebee movie incarnation has the touch and the power.

What are you picks for the top 10 action figures of 2019? Let us know in the comment section below!