The Outsiders can’t seem to lose since establishing themselves as a public crime-fighting force. They’ve rescued numerous meta teens while thwarting villains left and right. Best of all, the team has established a sizeable international social media following. They might even be a bigger deal than the Justice League. But good always comes with its share of bad. Gar’s squad found themselves in Lex Luthor’s sights on the latest episode of Young Justice: Outsiders. Not physically, mind you, but rather through tacit manipulation and subterfuge. Why fight your own battles? But Luthor isn’t the only one that knows how to play in the shadows. Hopefully, the Outsiders don’t get caught in the crossfire. 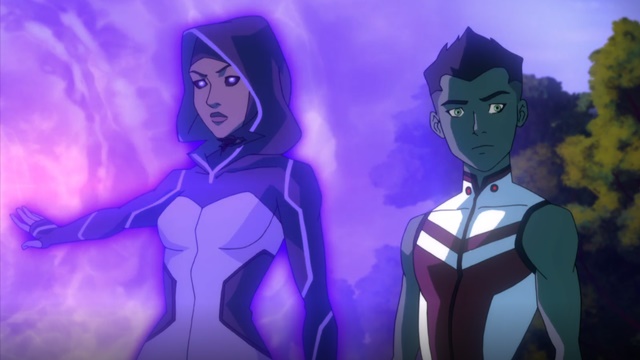 A climate change conference in Bwunda hosted at Lex’s hotel comes under fire from the Bwundan Independence Front. Troya is also attacked, but the Outsiders are on the scene quickly. They rescue Troya and other world leaders as M’gann subdues a BIF agent named Lia, destroying a mind-control device attached to her. Bart and Violet are injured in the fight, but Barry arrives to finish off the scuffle. Lex reveals that he called in the Justice League through proper channels, opening him up to criticize the illegal nature of the Outsiders’ tactics. Barry warns Lex about using him to his benefit before the team makes their exit.

Lia reveals that the BIF attack was a setup engineered by Lex. Cassandra Savage, who posed as a BIF agent during the attack, informs Lex of Lia’s capture. But Lex isn’t concerned. The Outsiders can’t prove his involvement.

The Outsiders return to Taos only for the adults to express concern about the dangerous nature of the team’s actions. Eduardo threatens to rescind his permission for Ed to join the team and M’gann benches Violet for refusing to discuss their recent attitudinal struggles. The team leaves in a show of solidarity. Their mission is too important. 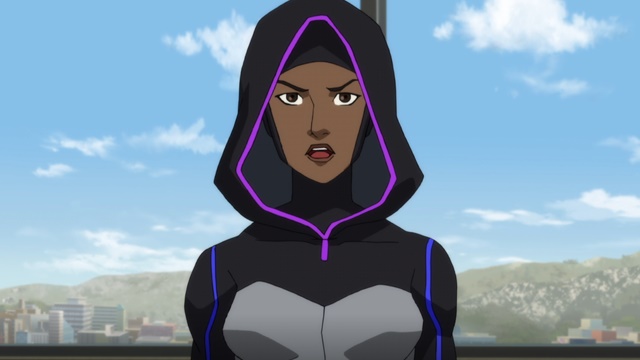 Violet begins to crack now that they’re being forced into close proximity with Brion. Helga warns him about the finite nature of first love before Violet tells him about kissing Harper. Brion quickly forgives them. But Violet has more to get off their chest. Violet reveals Gabrielle’s role in the Markovs’ assassination. Brion loses his cool and storms off while Terra almost goes into shock before checking in with Deathstroke again. A tormented Violet is left alone in the room to pen a letter whose contents remains unknown. 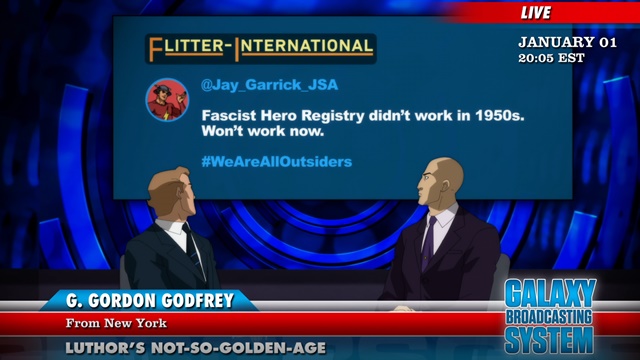 The Outsiders are called into action by reports of space monkeys in Dublin. But not all members are able to go. Cassie, Bart and Ed must stay behind as their parents and guardians arrive at the Hub. Their concern about the Outsiders’ safety remains heightened, with Jay mentioning the Watchtower’s grotto memorializing fallen heroes. But the kids aren’t swayed. They have to be there for the lost meta teens of the world, leading by example and empowering them.

The Outsiders easily dispatch of a slew of Lex’s spider bots and an Ivo bot, but Lex is quick to critique them publicly on G. Gordon Godfrey’s talk show. He sees the Outsiders as irresponsible, pointing to the Bwunda attack again. Lex calls out the Justice League for allowing them to operate before calling for metahuman registration. But Jay immediately calls Lex out on social media, labeling the idea as fascist. Lex ridicules Godfrey for going off script during the interview, but takes his advice to heart. It’s time to embrace and co-opt the Outsiders.

Lex isn’t the only one operating behind the curtain. Batman and the Justice League engineered the attack in Dublin. The reveal upsets Diana. Manipulating the public narrative for the League’s benefit isn’t what they do, even if Lex can’t prove their culpability.

What did you think about Young Justice: Outsiders episode 19? Share your thoughts with us in the comment section below!

Superman, Batman, and other DC heavyweights appear in new characters posters for DC League of Super-Pets.
Movies 7 months ago

The Flash is "Team Brainiac" in Suicide Squad: Kill the Justice League, and Task Force X has their orders to…
Video Games 1 year ago

In the long-awaited return of Young Justice, Superboy and Miss Martian are ready to tie the knot. However, they receive…
TV 1 year ago
Loading Comments...