It’s a new day for young stewards of the Justice League. The time came for them to step out of the shadows, leaving covert ops behind for a more public front. Well, most of them at least. There was no better way to take advantage of Gar’s fame once he returned to the Team. The move gave birth to Young Justice: Outsiders’ namesake. They might publicly operate separate from the Justice League, but the group proved their worth to their older partners. The youngsters could be of use. 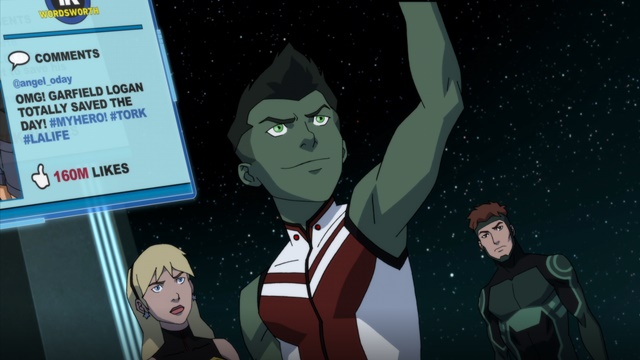 Gar calls a meeting with the Team, M’gann, Conner and Artemis. The heroic teen heartthrob has an idea to address the rising public skepticism toward the Justice League. It’s time for the Team to go public. Kaldur isn’t keen on the idea, but Gar’s argument is hard to disavow. Putting a public face on the youths’ heroism could quiet critics of the League and win back the minds of those that once revered them. Especially those of the younger generation. He points to the power of his social media presence as evidence. Kaldur agrees and Gar’s public team is set: Gar, Brion, Jaime, Dinah, Static and Kid Flash. Violet, Tara, Forager and Traci remain on the covert ops squad.

Gar even takes it upon himself to set up a new base of operations for both facets of the Team, Dubbed “The Hub,” Gar puts his fortune made from working with Gretchen Goode to use, setting his teammates up with living, training and operational quarters in a Hollywood high-rise. Helga offers to stay with them as a “den mother.” It looks like today’s Team has their own version of the Cave.

We Are All Outsiders 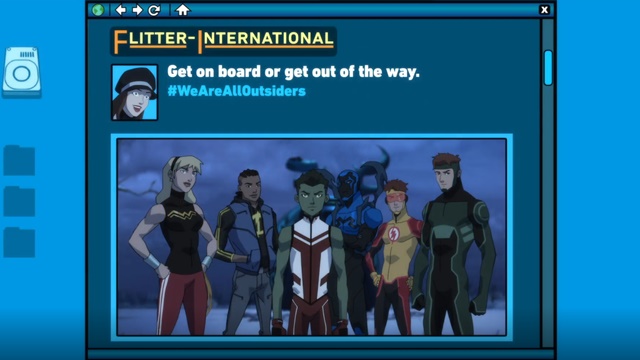 It isn’t long before Gar’s new public squad gets their first test. A group of Reach ships attacks a small town in Maine and the team rushes into action. With their friends looking on via live stream, the team helps Jaime deactivate the ships. A quick search reveals the ships’ pilots are members of Intergang, a group known for selling alien tech on the black market. Gar publicly introduces the team after the victory, but not everyone is celebratory.

Their heroics are rewarded with handcuffs after the town’s mayor demands they be arrested for vigilantism. But the ships’ deactivation inadvertently signals a larger, unmanned Reach ship to the fight. The mayor brags that the U.S. Air Force will take care of the new threat, but their missiles do little damage. If the military strike does work, though, then the entire town could be destroyed when the ship comes down. Gar and the team free themselves and board the ship as another round of fighter jets approach. They lead the ship away from town and cut the power, crashing the ship into a frozen lake. The sheriff defies the mayor’s order to arrest them again and Gar gives his team a name: the Outsiders. 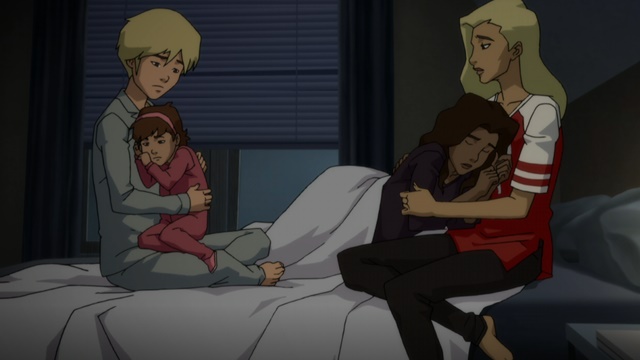 Artemis starts to get a touch of empty nest syndrome as Violet and Tara prepare to move to the Hub. She brings the girls together to have one last sleepover. A thunderstorm frightens Lian and Violet, so Tara and Artemis comfort them. But the weather sparks a memory in Tara of being in the embrace of her parents. It doesn’t dissuade her from contacting Deathstroke, informing him of the Outsiders’ connection to the Justice League.

At a meeting between Justice League leadership and those that left the team, Kaldur explains that he knew of Intergang’s activity before the attack. He allowed the attack so Gar would have a chance to prove his team’s capability. They passed with flying colors. Kaldur believes the Outsiders to be a benefit to their mission going forward.

What did you think about Young Justice: Outsiders episode 17? Share your thoughts with us in the comment section below!

As Zack Snyder's Justice League hits digital, a new report sheds light on the continuing feud between the director and…
Movies 7 months ago