Don’t expect references to any of that in the new special. Lucasfilm likely wouldn’t allow it anyway, but LEGO Harvey Korman and Bea Arthur will not become a thing. Chewbacca’s family do show up, but they remain unnamed, giving Lucasfilm the flexibility to not canonically dub them “Itchy” and “Lumpy” in future. A cynic might suggest that the entire goal is to make “Life Day” an official substitute Christmas, so that Disney can dress up Galaxy’s Edge in seasonal decorations and merchandise. Anyone who has visited Batuu will notice its influence here. Fried chicken at the Disney parks is dubbed “Endorian tip-yip,” and so it is here as the centerpiece of the Life Day feast. Synergy!

With the caveat that LEGO Star Wars continuity very loosely lines up with the movies, the special functions as a sequel to The Rise of Skywalker. Rey (Helen Sadler, passably imitating Daisy Ridley) has taken on Finn as a potential Jedi apprentice, but finds him a slow learner. Seeking knowledge that might help her become a better teacher, she finds an ancient hollow tree which contains a space-time key. This allows her to open portals to other Star Wars movies and shows, primarily to understand master-apprentice relationships. 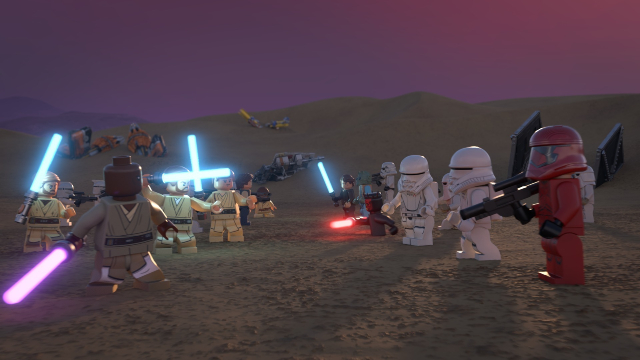 For a while, this Back to the Future Part II take on Star Wars plays as delightful fan service. Rey and BB-8 try to hide while previous key scenes in the saga take place in their background. And then the bad guys get involved. Emperor Palpatine gets the key for himself, and in trying to see his own future, finds Kylo Ren instead. Playing him off against Vader, and armed with the knowledge that he’ll be thrown down a Death Star shaft in short order, Palpatine tries to change the past.

And Palpatine is a problem. Up until we meet the Sith, every voice actor has played a reasonably close facsimile of the character represented. Billy Dee Williams, Anthony Daniels, and Kelly Marie Tran actually do reprise their roles. And Clone Wars actors Matt Lanter, James Arnold Taylor, Tom Kane and Dee Bradley Baker fill in their usual parts. But Trevor Devall’s Palpatine isn’t remotely Ian McDiarmid — he’s blatantly doing the Seth MacFarlane Robot Chicken version of the Emperor. Matt Sloan’s Darth Vader fulfills that dynamic as a bit of a sad case. Meanwhile, Matthew Wood’s Kylo Ren sounds better in the helmet than out of it.

That’s one way to go, but it’s not the way the story up until then has gone. It’s all comedy, but there’s a difference between convincing parody/impersonation and a purely absurd take. And The LEGO Star Wars Holiday Special isn’t deft enough to ride the thin line between them. It still lands many of its jokes — like, who doesn’t want a shirtless Kylo Lego minifig? And yes, Greedo shows up to say “Maclunkey” along with the inevitable “Who shoots first” gag. Din Djarin even gets a cameo, which makes sense. After all, he draws heavily from the animated Boba Fett in the 1978 original.

Still, in trying to be all things to everyone, the Special falls a bit all over the place. Star Wars fans will appreciate the jokes, but others may be as confused as a three year-old faced with LEGO Technic instructions.

Aardmans's take on Star Wars should be interesting.
TV 7 days ago

Nobodies, or Palpatine?
Movies 2 weeks ago

All yellow streaks are strictly literal, not metaphorical.
TV 1 month ago