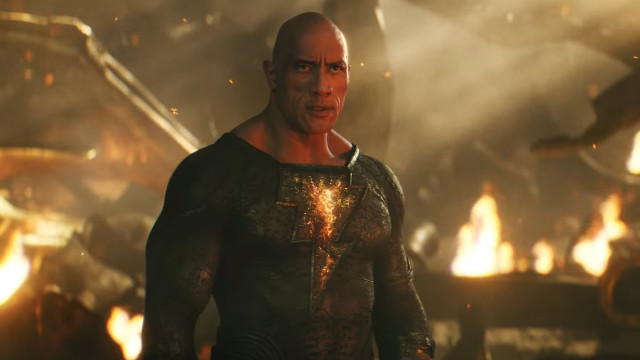 Dwayne Johnson‘s had fifteen long years to make the Black Adam movie he wanted and get it right. With the movie having premiered yesterday, after screening for the junket press, has he done that? Well, while not all the initial Black Adam reactions praise everything, they mostly agree that it’s full of adrenaline-pumping action, and that Johnson and his JSA cast members remain compelling.

Pierce Brosnan kills it as Doctor Fate. He steals scenes. Charismatic as ever.

Aldis Hodge’s Hawkman leaves a lot of meat on the bone for future stories to dig deeper into. His action scenes are terrific.#BlackAdam relies on action, lands some humor, and it’s bad-ass. pic.twitter.com/zYEdqIY7zO

#BlackAdam is a MASSIVE DC outing. The action is brutal, and Dwayne Johnson delivers on his promise of shifting the DCEU in a different direction. The story itself is up and down, as certain scenes don’t pack the intended punch… Although there are moments that fans will LOVE. pic.twitter.com/0TTwyiC2fS

I have seen #BlackAdam! This was one of my most anticipated films of the year, and it did not disappoint. The action sequences were incredible, especially the ones with the JSA. The Rock crushes it as Black Adam. The film’s end left me with high hopes for the future of the DCEU. pic.twitter.com/vd0Zy35lWT

Some reactions compare it positively to the work of Zack Snyder, which may indicate future divisiveness from fans not into that approach.

Black Adam is everything that I hoped it would be and more. A Snyder-esque antihero spectacle that delivers big action and impressive set pieces. Dwayne Johnson transforms into Black Adam, a role that he was born to play. Centineo & Swindell are so damn fun to watch. #BlackAdam pic.twitter.com/V1tY0liyph

#BlackAdam is the best DCEU movie since Zack Snyder’s JL and it definitely embraces the DCEU with multiple new characters and great action sequences. Also there’s a Cameo that will have everyone talking for weeks. I can’t wait to see it again! pic.twitter.com/kp6oGzQbB8

#BlackAdam is the most fun I’ve had watching a DC film in theaters since BvS. The film is huge in scale, epic & that post credits Scene which we all know what it is got the biggest cheer since Endgame imo. The JSA are all fantastic & the film sets up a bright DCEU future. Love It pic.twitter.com/bbsi8tJPgH

Even those who think Johnson overhyped the project, as he does, still enjoy the action:

#BlackAdam is a worthy new piece of the DC puzzle, but not the savior it promised.

A surprising compressed timeline keeps the action exciting & pace propulsive, but also turns its many (many) themes, plots, & characters into fancy window dressing. It’s messy in a watchable way. pic.twitter.com/uwZUb2hbiM

#BlackAdam was so much fun! It was wonderful to see someone actually question the right way to fight evil. The action scenes are a total blast! There are little things that you can quibble with, but it was a fast-paced thrill ride. (Stupid tweet didn’t tweet last night.) pic.twitter.com/S9Zo7GbeME

.@TheRock is terrific in #BlackAdam, which includes a hearty amount of real world touchstones (most affecting is it reinforces the need for heroes in bleak times). Director Juame Collet-Serra lays out building blocks for a larger, grand universe. Action is lively & BIG in scale. pic.twitter.com/pDBkSHRDrI

We did find at least one naysayer, who has a lot of “nay” to say:

Had to go through metal detectors for the Black Adam NY screening. Pity it’s bad – no emotional depth, zero sense of peril for the main character and dull CGI battles. #BlackAdam pic.twitter.com/gUjxHy1oUO

As always, bear in mind that initial reactions tend to be more enthusiastic than final reviews. Many come out of an exciting premiere atmosphere, or could be affected by the hassles of same, like security. Regardless, it’s at least a good sign for SHH writers that writers who are generally immersed in superhero films are mainly enjoying it so far.

What do you make of the first reactions? Let us know in comments!