Thor: Love and Thunder Review – The Gods Must Be Lazy

It’s pretty simple, really. If you liked Thor: Ragnarok, you’re going to like Thor: Love and Thunder. Just maybe not quite as much. It has the same sensibility, most of the same major characters, plus a blonde Natalie Portman with a newly enhanced superheroic bod. What it also has, however, is a weirdly lackadaisical structure that barely stitches its big scenes together. Combined with the sheer number of moments that take place across vast CG-scapes with only a couple of characters, and it seems pretty clear that quarantine necessitated various adjustments and rewrites. love and thunder review

For the most part, provided you already like these characters and their storylines, everything’s entertaining enough to cover the gaps in story logic. It’s only on rewatches that the head-scratching may kick in in earnest. Don’t expect detailed retellings of the comic arcs featuring Jane Foster as Thor, or Gorr the God Butcher’s storyline. Director/co-writer Taika Waititi combines the most bare-bones versions of those tales as a means to get Thor from point A to point B. To be fair, he does include the device of an unreliable narrator (Korg, played by Waititi himself) telling the whole story as a campfire tale. And restarting several times. It’s an easy out if Marvel Studios ever decides to de-canonize anything herein.

That said, anyone who loves both Guns N’ Roses and viral videos of screaming goats as much as Waititi obviously does — this reviewer’s hand is raised — should feel good to go.

Thor (Chris Hemsworth) ditched the dad bod since last we saw him. And may have lost a brain cell or two as well. He feels particularly lunkheaded and unwittingly destructive as the movie begins. Since the Guardians of the Galaxy really don’t need an extra member who combines the worst traits of Star-Lord and Drax in one, they diplomatically part ways. 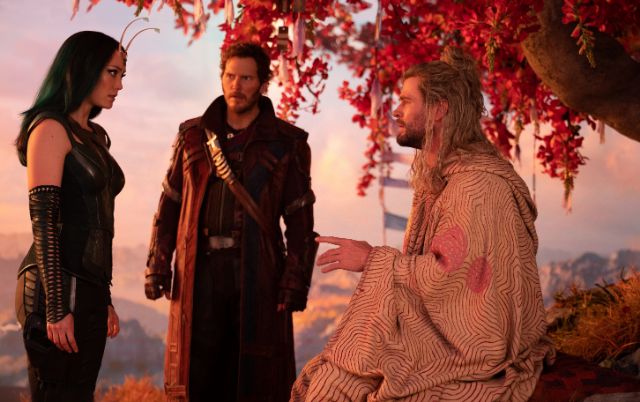 Meanwhile, for no reason ever satisfactorily given, a sentient sword that wants to kill gods falls into the hands of a fellow named Gorr (Christian Bale) who’s equally and similarly desirous. Thor catches word of Gorr’s first few successes in this area. And being a god himself, he seeks out help. Which reunites him with Valkyrie (Tessa Thompson) and a newly Thor-powered Jane Foster (Natalie Portman). Who now wields a reconstituted Mjolnir.

There’s plenty of room for potential blasphemy here. But rest assured, most of the major deities worshipped by current human beings do not figure in to this story. Though it has invented at least one that some fans might want to worship, in plush form if nothing else. Marvel’s “gods,” like Thor, seem like overpowered nigh-immortals with massive egos. They honestly deserve a comeuppance, though perhaps not the death penalty Gorr intends. 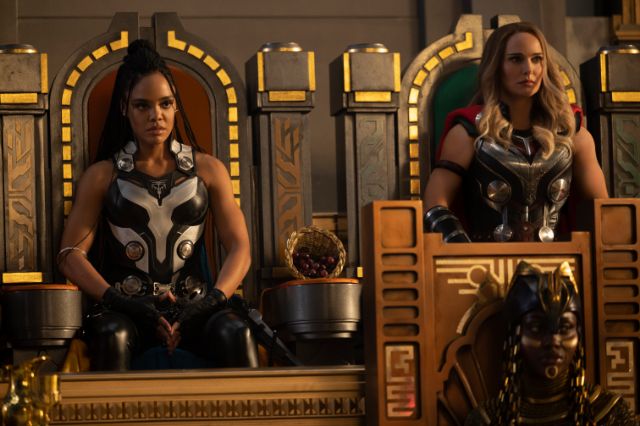 Waititi directs with the sensibility of a kid in a candy store. So it’s no surprise his characters mostly follow suit. Thor, regressing to his comfort zone, once again acts like an enthusiastic, sugar-buzzed middle-school kid who’s never been told “no,” with Korg as the sweet-natured sidekick who just wants to be the popular guy’s best friend. Valkyrie’s like a teen just old enough to be entrusted with responsibility, which she hates and wants to ditch at the first opportunity. And Portman plays Jane-as-Thor like an ultimate girl geekout, relishing the newfound power and trying out catchphrases.

Gorr, meanwhile, comes off like the kid so abused that he became the terrifying neighborhood bully. Inspired by Aphex Twin’s “Come to Daddy” video, Bale makes him suitably terrifying, and proves he could have played the Joker just as easily as Batman. The He-Man and Skeletor parallels seen by many fans in the first trailer and poster still feel apt — Mattel may never do this well in capturing that dynamic. That he hangs out mostly in a realm with severely bleached out colors also feels like a Snyderverse gag. Though to be fair, that association does up the threat level, given how much freer Snyder’s super-characters tend to get with killing.

Russell Crowe’s choices as Zeus are best left unspoiled. Suffice it to say some are…unexpected.

In terms of the action, Love and Thunder faces an issue common to many martial arts and superhero movies. Namely, when invincible beings fight, it’s hard to be clear what victory would look like. Foes remain indestructible until they aren’t. Powers we didn’t know anybody had tip the balance. There’s little tension when we have no idea how anyone involved can get hurt. Most Marvel movies clarify the stakes fairly well in situations like that, but Waititi’s more interested in emotional truths than plot points. And as may seem obvious by now, every character must learn, essentially, to grow up. If in some cases that means rolling back the maturation progress they made in previous films, who cares? Not Waititi.

Marvel does offer several LGBT moments herein — more so than in something like The Rise of Skywalker, but still not crucial to the plot. Countries that overreact to such things may have to make 4-5 trims rather than just one. But as with Doctor Strange in the Multiverse of Madness, they should prove that a much smaller scene in Lightyear was hardly the poison pill some suggested. 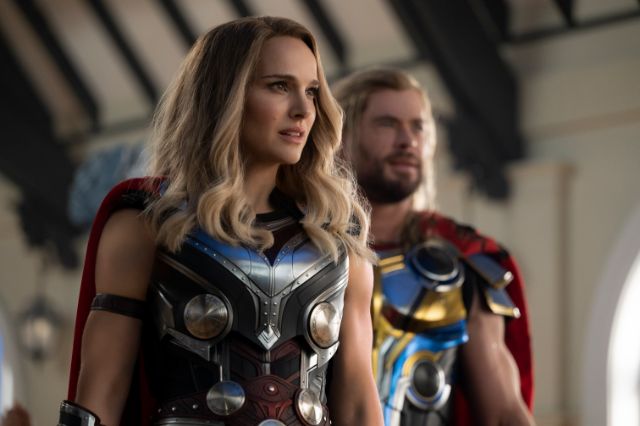 Waititi winning an Oscar for Jojo Rabbit‘s screenplay may have made it harder for Marvel to surround him with scripting collaborators like Ragnarok‘s credited Eric Pearson, Craig Kyle, and Christopher L. Yost. Indeed, Waititi didn’t even have a writing credit on that one, although many of the jokes clearly came from him. Here, the credited writers are Waititi and Jennifer Kaytin Robinson (Unpregnant). Granted, COVID likely forced many changes. But viewers may come away feeling that Waititi needs stronger comic book voices to provide more structure to his sensibility.

That said, the sensibility remains tremendously entertaining on a moment by moment basis. The very best Marvel movies aspire to more than that. But if they can’t get there, it helps to have great laughs and committed performances.

And Thor smashing up aliens to the strains of “Sweet Child O’ Mine,” of course.

The eyes have it.
Geek Culture 2 months ago

Chris Hemsworth Thinks His Next Thor Appearance Could Be His Last

After spending more than a decade in the MCU, Chris Hemsworth feels that his time as Marvel's God of Thunder…
Movies 2 months ago
Loading Comments...