As big of a hit as Aquaman was, several DC fans couldn’t help but raise an eyebrow when Warner Bros. announced The Trench, a proposed spinoff that would have featured the terrifying undersea creatures that Arthur Curry encountered in his original standalone film. The beasts certainly gave Aquaman one of its most memorable scenes. However, it was hard to imagine them carrying their own movie, even with James Wan onboard as an executive producer. But according to Wan himself, the studio had bold plans for the film before it was canceled earlier this year.

Last week, Wan took to Instagram to share new looks at the updated armor that Yahya Abdul-Mateen II’s Black Manta will be sporting in Aquaman and the Lost Kingdom in 2022. And when a fan asked him if a spinoff series featuring Abdul-Mateen’s character was in the cards, Wan gave a surprising answer that slipped under everyone’s radar…until today. It turns out WB was developing The Trench as a starring vehicle for Aquaman’s nemesis, with Abdul-Mateen reprising his role. Check out Wan’s response below. 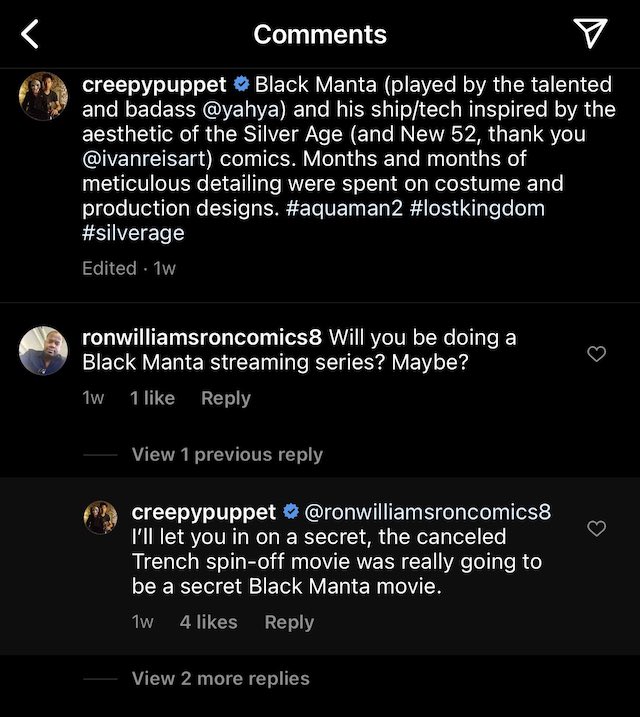 Wan’s revelation is surprising. After all, the studio’s original Trench announcement clearly stated that the film wouldn’t feature any of Aquaman’s principal cast members. Having Abdul-Mateen headline the film might have actually made it an easier sell with moviegoers. But instead, we’ll just have to settle for seeing him share the screen with Jason Momoa when Lost Kingdom debuts next year.

Aquaman and the Lost Kingdom will hit theaters on December 16, 2022.

Would you have watched The Trench if it featured Abdul-Mateed returning as Black Manta? Let us know in the comment section below!

Recommended Reading: The Art and Making of Aquaman

According to DC Films President Walter Hamada, the studio did consider replacing Amber Heard in the Aquaman sequel. But not…
Movies 8 months ago

Amber Heard Says Mera Has a Reduced Role in Aquaman 2

While testifying against her ex-husband, Johnny Depp, Amber Heard claimed that Mera will have much less screen time in Warner…
Movies 9 months ago