There’s something slightly ironic about a mega-million dollar budgeted superhero epic telling its viewers that excess is bad. And especially when it’s arriving on HBO Max for no extra charge on Christmas Day, the theme of how it’s good not to necessarily get one’s heart’s desire feels like maybe it needed a different messenger. But Wonder Woman 1984 is, after all, a movie set in the mid-’80s. Excess was everywhere, and those who lived through it often feel nostalgic for it. Apart from that pesky hair-trigger Cold War constantly threatening nuclear annihilation, of course.

Director Patty Jenkins initially revels in everything one might expect: leg-warmers, spandex, arcade games, shopping malls. Alas, only one ’80s pop hit gets any soundtrack time, but it’s a good, not-overplayed one. But sure enough, by the end the military industrial complex will come into play, and the notion that maybe it shouldn’t get everything it wants. The onscreen president of the United States isn’t named specifically, nor is his makeup an exact match for anyone in particular. But he’s close enough to the man who was in charge in that time. 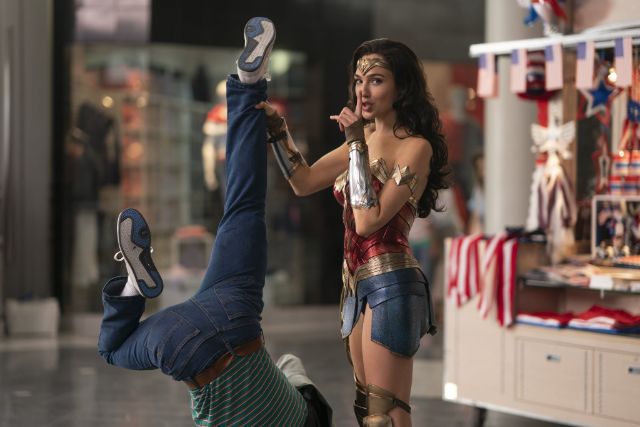 Speaking of which, some have suspected the villain of the film, Pedro Pascal‘s Maxwell Lord, might be a riff on the current occupant. He’s really not, in any way that matters, but he comes from the same ’80s Lifestyles of the Rich and Famous, famous-for-being-famous milieu. His Latino heritage is not insignificant, nor that he feels he has to de-emphasize it with a terrible dye job. And his villainy stems almost entirely from the fact that he’s tried and failed to obtain success the honest way.

Diana (Gal Gadot) still pines — pun intended — for long-dead love Steve Trevor (Chris Pine) as she works her museum job that utilizes her firsthand knowledge of ancient languages and relics. She also periodically engages in saving the day, but in small ways. In fact, she regularly swears the recipients of her rescues to secrecy. (It seems silly, but this allows for Batman v Superman to remain not entirely contradicted.)  And she’s learned to swing from her lasso like Spider-Man on a web, attaching it not just to tangible objects, but non-solids like clouds and lightning bolts too.

Into her life comes Barbara Minerva (Kristen Wiig), who’s initially as awkward and comedically clumsy as Wiig characters tend to be. Newly employed at the museum, she brings with her an artifact that she’s certain is a fake. Naturally, it isn’t…nor is its apparent magical power. The less spoiled about that the better. But as the trailers have amply revealed, Steve suddenly shows up alive again, Barbara gains super-strength and charisma overnight, and Maxwell Lord has even grander plans than all that. 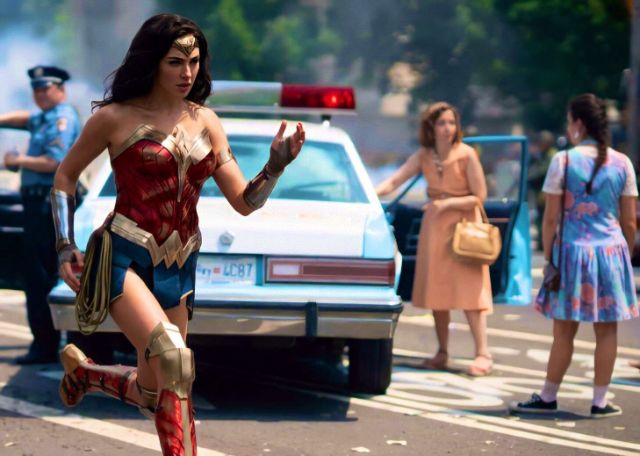 At just over two and a half hours, Wonder Woman 1984 feels overlong. And much of that excess length comes in the first part of the film. Jenkins wisely tacks on a childhood flashback action sequence to open with a bang, followed by a modern day comedic action montage. But from there it’s a long stretch before the action kicks in again, and for much of it, Diana just isn’t that interesting. Mostly out of costume and reclusive, she’s more of a sounding board for other characters to bounce off of. The pace picks up when Pine reenters the story; this time, he’s the fish out of water, excited and amused by the “future.”

Once Lord unleashes his villainy, however, we’re good to go. A desert chase scene is aces, and the fight choreography always clear and fun. Plus once she actually commits to the fight again, Diana shows surprising vulnerability and emotional engagement relative to earlier. Barbara — who doesn’t go full Cheetah for most of the movie — comes off as the female version of the entitled incel villain type we’re seeing more of these days, which is an interesting twist.

Thematically, the movie deals with the notion of getting what you want, and the price one has to pay in return. And it’s not just the greedy, hateful wishes that the movie attacks. Wonder Woman 1984 also suggests that even wishes made out of love and pure motives remain untrue and unearned if shortcuts were involved. Nobody tell Warner Bros. and HBO Max the irony of their not wanting to wait for safe theaters in this case. 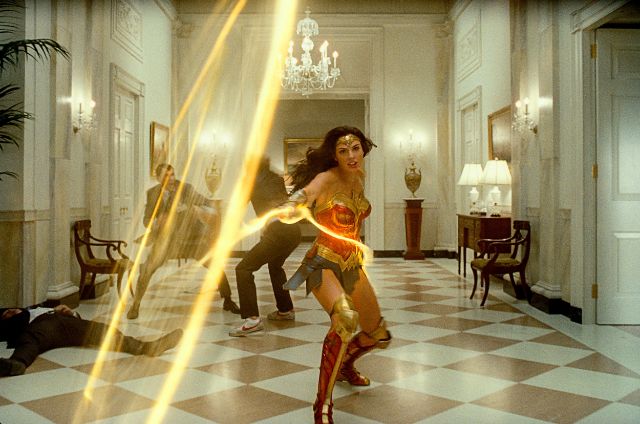 Jenkins cited Richard Donner’s original Superman as inspiration for the first Wonder Woman. Rather ambitiously, she channels all of the sequels in this one. Periodically, as in Superman II, the Richard Lester-ish comedy bits feel tonally at odds with more mournful moments. But while those movies kept going back to the same villain well with Gene Hackman, Jenkins upped the ante significantly here. Wonder Woman had a bit of a villain problem when its biggest threat was CG Ares with David Thewlis’ face. Here, the scales tip in the other direction. As in Michael Keaton’s Batman films, the villains are now a lot more interesting than the lead hero. In part, that’s because we already know how this timeline ends for Diana. But it may also be because Gadot doesn’t play “repressed” well — she’s a force to unleash, not cover up.

RELATED:  Wonder Woman 1984 Hits PVOD in the UK and Ireland in January

Sticklers for comics accuracy may not be perfectly happy. Lord, for one, has a completely different “power” as such than usual, though he retains the character’s signature post-power nosebleed. And Minerva’s final transformation into a cat person feels a bit arbitrary given the specifics involved. Also best not to think about the physics of any of the flying scenes. But the script, by Jenkins, Geoff Johns, and Dan Callahan, incorporates shoutouts to the mythology in fun ways.  Be sure to stay tuned for the mid-credits bonus scene.

It’s a bit much to suggest, as some have, that Wonder Woman 1984 is specifically the hope we need in troubled times. It’s refreshing, however, for any part of the culture to suggest that sometimes wanting more stuff is just a destructive distraction from what’s right and true. Even as it indulges our love for said stuff.

Henry Cavill and Gal Gadot’s Cameos Cut From The Flash

The ongoing shakeup at DC Studios has allegedly prompted Warner Bros. to cut scenes from The Flash featuring Henry Cavill…
Movies 2 months ago

The former director of Wonder Woman 3, Patty Jenkins, breaks her silence about her exit from the film and offers…
Movies 2 months ago

Wonder Woman 3 director Patty Jenkins may have burned a few bridges with Warner Bros. while resisting notes from the…
Movies 2 months ago

According to a new report, Wonder Woman 3 director Petty Jenkins turned down the opportunity to revise her script treatment.
Movies 2 months ago
Loading Comments...