4K Review: Batman Forever, The End Is the Beginning Is the End

“The End Is the Beginning Is the End” is the title of the Smashing Pumpkins song on the Batman and Robin soundtrack, but thematically it applies better to its predecessor, Batman Forever. The third Batman feature from Warner Bros., now out in a new 4K disc, seemed at the time like a fresh start in the right direction. Looking back, we can see it was the beginning of many bad decisions. Decisions that would ultimately send superhero cinema into hibernation.

As much as I liked the Tim Burton movies, Michael Keaton never felt quite right as a comics-accurate Batman. He was short, approaching middle age, and killed people. The casting change to Val Kilmer was a shock, but a welcome choice: Kilmer had the right look, and had that distracted, deep-thought quality Bruce Wayne would have. He’s still a solid choice for Batman. It’s a shame he’s in the wrong movie for it.

Not unlike Return of the Jedi, or more recently The Force Awakens, Batman Forever tries to get back to the things people enjoyed about the first film, without so many of the creepy, dark things parents didn’t. So Gotham City no longer looks like Edward Gorey drawings, but is back to being a large-scale city. (With the the Joel Schumacher touch of gigantic, mostly nude male statues holding things up.) Tommy Lee Jones’ Two-Face is played as a less-scary version of Jack Nicholson’s Joker. Nicole Kidman’s Dr. Chase Meridian is basically Kim Basinger’s Vicki Vale again, a woman drawn to danger who has a Bat-fetish. 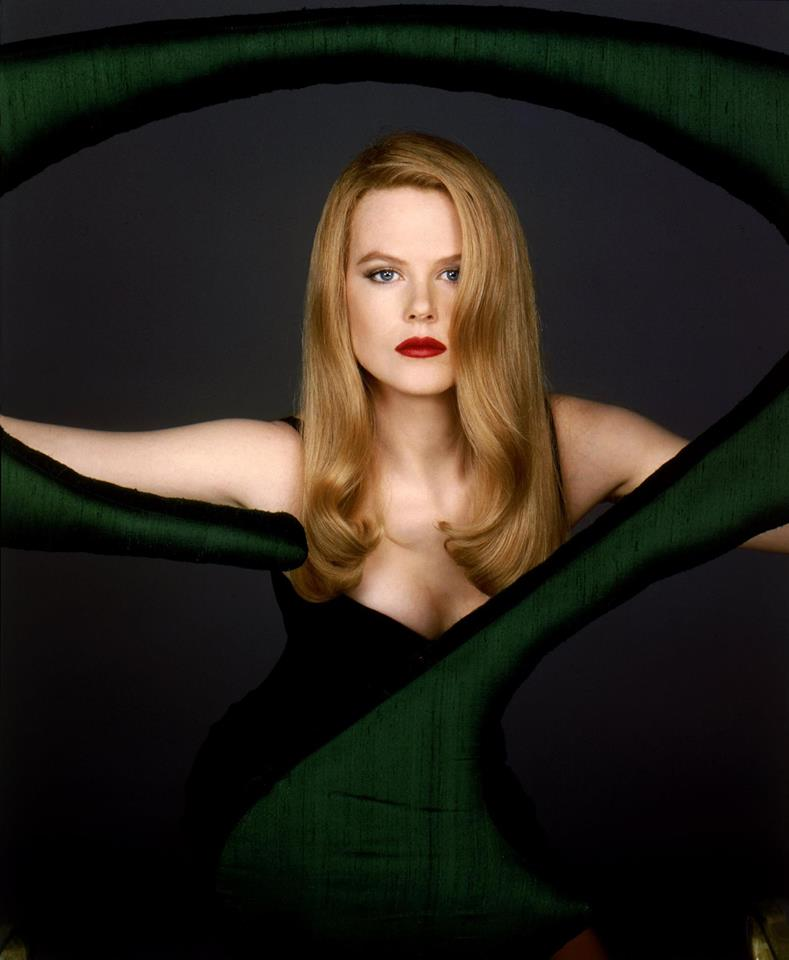 And since Batman can’t kill the Joker a second time for murdering his parents, Robin gets to go after Two-Face for killing his parents. Ironically, despite an entire subplot about how it’s wrong and bad for him to do that, Two-Face ultimately drowns as Robin smiles.

The script, originally by Lee and Janet Scott Batchler (whose only other feature credit together is 2014’s Pompeii), seems like it got a lot right. The theme of duality is present throughout. One villain seeks to kill Bruce Wayne; the other, Batman. The aptly named Dr. Meridian is attracted to both Batman and Bruce. Two-Face himself is split between good and evil. And Bruce has to realize he cannot work alone, and needs a partner who is something of a flawed mirror version of Batman himself.

Here’s the problem: director Joel Schumacher, who had Akiva Goldsman do a rewrite to make things lighter, either doesn’t understand the duality theme or doesn’t care about it. Only Kilmer plays his character with anything resembling duality; if Kidman finds different things sexy about Bruce versus Batman, it’s never clear what. And the villains are simply larger and louder versions of who they already were before their physical transformations. 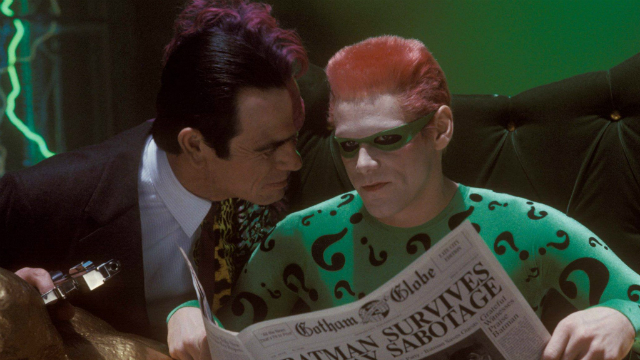 This brings me to a theme that I think becomes even more apparent in Batman and Robin. Schumacher doesn’t think in terms of secret identities when his humans become super. They’re more like drag or pro-wrestling personas. If Bruce Wayne is RuPaul Charles, actor/host, then Batman is RuPaul, Supermodel; or if Bruce is Terry Bollea, Batman is Hulk Hogan. The fact that Two-Face goes by “Harvey Two-Face” is a tell; he’s not rejecting his previous self at all, just expanding upon it. And the Riddler’s riddles are all designed to clue Batman in to his real name. He’s not pretending, either.

In Batman and Robin, Batman actually has a credit card under his superhero name. To whom, and where, exactly, are we to assume the bills get sent? No, the only difference in personae is they all put on wilder clothes, hair, and make-up, and get to act larger-than-life. By the end, Carrey’s Riddler get-up is almost the same as Uma Thurman’s Poison Ivy look in the next film.

On that note, the movie ends with Batman declaring that he is Bruce Wayne and Batman simultaneously, by choice. There is no duality any more, if ever there was. Schumacher infamously said it was time for Batman to get over the murder of his parents, and he does, in a dream subplot made more confusing by the fact that much of it was cut. Originally, Bruce misread his father’s diary in almost Simpsons-esque fashion, and thought he was to blame for his parents’ deaths by demanding they go out that night. Later, he would have turned the page and realized his father stayed firm that they go out another night. It’s sitcom-level silliness, but what remains of it is simply confusing. Now, he says there’s something new in his memories, but we never actually see anything like that.

Plot arguments aside, however, the movie in 4K looks like a million bucks. Or rather, many millions of bucks. Gotham City is represented by real locations, giant models, massive soundstages, and one badly dated CG cityscape. The movie opens with a helicopter crashing into Gotham’s Statue of Liberty. Explosions go large, and skylines get elaborate. Plus you can see every mole on Kilmer’s face, which makes Jim Carrey’s effort to impersonate him at Ed Nygma’s grand opening doubly funny. Carrey’s shtick generally has aged a bit. Carrey was a fresh face on the big screen at the time, but now this just plays as that thing he always does. 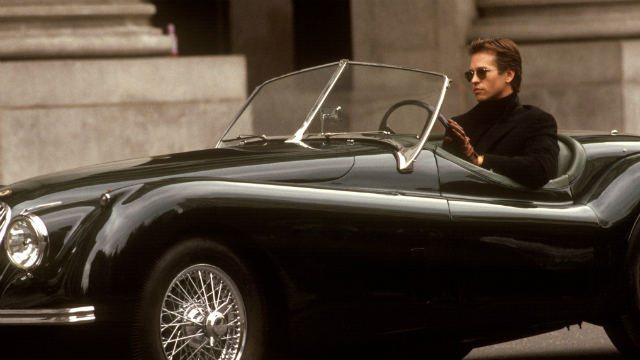 Kilmer could have been one of the greats, but in light of all the superhero films that have come since, Batman Forever now just feels pretty disposable. It so clearly wants to be something better than it is, and at the time, we all expected it would lead the way to that potential better thing.

And we couldn’t have been more wrong.

"Mumble mumble...You have my permission to buy!"
Geek Culture 5 hours ago

With a tone more akin to The Princess Bride, Willow takes its fantasy world seriously, while depicting characters with very…
TV 2 months ago
Loading Comments...