Batman Returns, out on 4K this week and in a four-pack starting in September, really marks the moment when Tim Burton, director, became Tim Burton, cultural touchstone. It’s the first film where everything came together that he would keep bringing together ever after. Every Burton stereotype began here: take a pop-culture thing that was mildly creepy before and make it super-creepy, using Edward Gorey-ish designs, black and white spirals, German expressionist angles, and weird mutant human mash-ups. Danny Elfman’s score goes “lalalalala,” children are endangered, and classic kiddie imagery like the zoo, circus, Christmas, and rubber duckies becomes sinister all of a sudden. For being the first, it is also the best, even if the story comes off extremely confused, likely due to the odd pairing of Heathers scribe Daniel Waters’ feminist social satire with Burton’s smothering “weird kid who wants to be loved” themes.

The way the structure breaks down, Batman is almost a side character in his own story. Penguin is the protagonist, and Max Shreck the antagonist, but they’re (naturally) two sides of the same coin. Max is the socially acceptable face of ruthless big business, while Penguin is the dark, ugly, abusive, lecherous secret face of it. Christopher Walken seems to be taking his cues from ’80s Art of the Deal Donald Trump. Conversely, Penguin behaves more like modern Trump, up to and including getting caught on tape saying terrible things. Although it hurts Penguin more. Following the Burton theme of outsider wanting to be normal, Penguin is sympathetic while he still seeks to reintegrate into society. However, the moment he rejects it all to go full outsider, he’s an agent of chaos and must be killed. 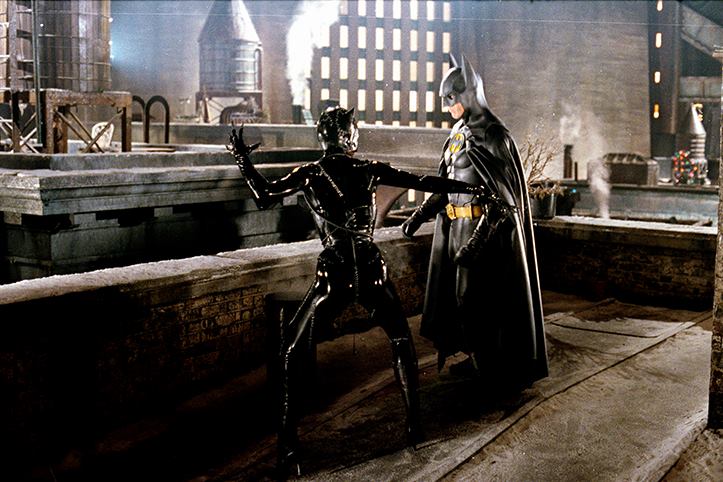 For Batfans looking at the big picture of these first Bat-movies, Batman refusing to kill Max Shreck was a turning point. This was finally the moment he decides that killing is wrong. But viewed through the Burton prism, it’s more sinister. Max is perhaps the sole villain in all of these movies to perfectly fit in to “normal” society. As such he is arguably the worst, because his evil goes mostly unchecked. Yet Max is the one Bruce can’t kill. Doing so would permanently exclude him from the boy’s club of normalcy, while killing freaks is an expected check on anarchy.

So it’s down to Catwoman (Michelle Pfeiffer) to do it, by also eliminating herself as a chaotic agent. Her last-minute survival at the end feels studio-mandated and not Burton-organic. Her sin in Burton-land is to ultimately reject the offer of a normal life that Bruce Wayne presents, however little he’d be likely to deliver on it. In the end, normal good-guy billionaire Bruce Wayne kills the ugly face of corporate harassment and greed in Penguin. Then he lets feminist revenge and unchecked criminal capitalism cancel each other out. Blandly normal hierarchy/patriarchy reigns, albeit with the secret side of Batman. In this film, Batman is 100 percent an extension of the police force, so conformity again.

It’s not clear if Burton intended the movie to be ultimately authoritarian. But the gigantic working-man statues as set dressing on either side of the mayor do feel like totalitarian architecture. I’d like to think it’s all ironic. Whatever the case, this film delivers one twisted take on Batman. As for Bruce Wayne’s mature love life, once again it’s more complex than the average multiplex teen might be interested in. He becomes drawn to a strong woman who stands up to him, yet can’t stand that she might be more “extra” with her dual life than he is. He needs the control; she needs a strong independent guy. Neither is quite there with what the other requires. 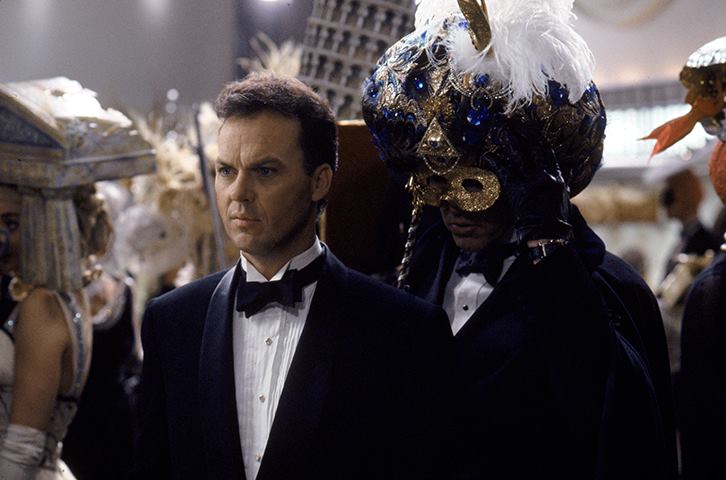 As far as also targeting an older audience, the script drops references to the Gulf of Tonkin, the Reichstag fire, and of course “unlimited poontang.” I understood none of those the first time I saw it. Rewatching it with my millennial wife, it turned into a teaching moment. And I like that — if a reference in a movie makes a viewer look something up, that isn’t an inherent evil. Even if Hollywood may think so.

4K isn’t a revelation for the sequel as it was for the original. Numerous shots feature face blow-out, when actors’ faces show up in the frame they feel digitally smoothed over. Yet the overall look of the film improves. I used to have a real issue with the way Batman Returns looked more blatantly like a soundstage than the original. Now, the matte paintings and sets feel like they blend together better. And it seems a more cohesive world, maybe because the backgrounds are now more visible. Extras are the same as they were on the previous Blu-ray.

It might be just as well that Burton stopped here. Could he have evolved Batman further, given that Batman Returns plays like the ultimate take on Burton-meets-Batman? We’ll never know. But mainstream movie studio execs had now become exasperated with superhero movies not taking kids into account, and that had to change. It did, drastically, as we’ll see in the next review.

The Return of Swamp Thing will get the deluxe 35th anniversary treatment from Lightyear Entertainment
Movies 2 months ago
Loading Comments...