Masters of the Universe Revelation, Part 1 Review: Powered Up

Kevin Smith sometimes comes off more as a carney barker and self-promoter than a creator. Because of this, fans who both love him and hate him pick through his every utterance trying to determine whether he’s actually the longtime Masters of the Universe fan he now claims to be. But in the end, it’s the final product that matters.

Regardless of when Smith became enamored, the first five episodes of his Masters of the Universe: Revelation make a hardcore play for fans of the entire franchise. There are deep cuts (Wun-Dar!), emotional moments, and things fans have wished to see for a long time. As the first animated return to Eternia since the 2002 Mike Young Productions cartoon, it’s a welcome return.

But do note that this is for fans of the entire franchise. The 2002 cartoon, the live-action movie, the Classics action figure line…everything. Fans of just the Filmation He-Man cartoon might feel the way Adam West die-hards reacted when a rubber-suited Michael Keaton murdered the Joker. Not that it gets quite that dark, but this goes far from the campy ’80s animated take. And the show is called “Masters of the Universe” rather than just “He-Man” this time. Like The Force Awakens and Zack Snyder’s Justice League, Revelation makes its most powerful hero the object of the quest rather than its primary protagonist. 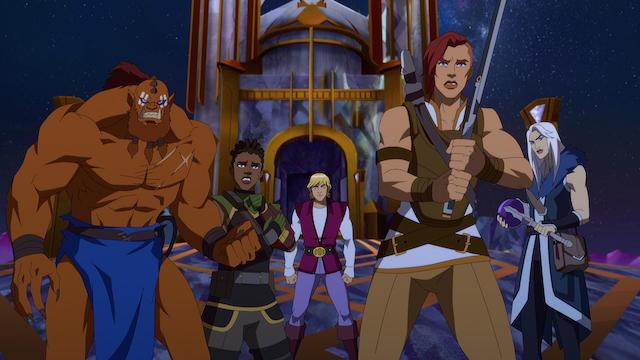 Yes, for at least the first five episodes, Teela (a perfectly cast Sarah Michelle Gellar) is the lead. Although that could very easily change in part 2. But any serious fan of the whole toy line played with characters besides He-Man. And He-Man still gets significant screen time, in flashbacks to his former adventures.

The opening credits signal the show’s acknowledgement of all eras, with actual toy package artwork, and an introductory narration only slightly altered from the one in the Dolph Lundgren movie. From there, the show indulges in the kind of light-hearted hijinks of the Filmation series, with a royal celebration where Orko goofs up, colleagues question Prince Adam’s bravery, and King Randor promotes a new Man-at-Arms.

Then there’s a drastic shift in the status quo, followed by a time jump forward to a very different Eternia. Allegiances are shattered, the harmony between science and magic has broken down into factions loyal to one or the other, and it’s up to Teela to bring together a team to restore the planet’s magic. Netflix’s Ted Biaselli reportedly insisted to Smith that the story had to have real stakes and jeopardy. This it does: not everyone makes it out alive.

That said, we are talking about a planet with magic and time travel. Anyone who watched the 2002 series may remember characters who returned to life after turning into statues and shattering. Just like comics continuity, Eternia can theoretically always find a way. 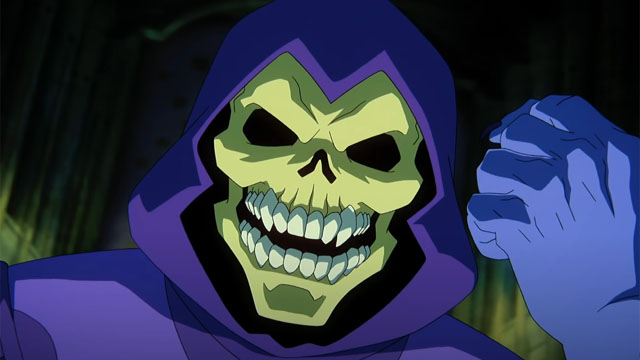 Every version of Masters of the Universe picks and chooses which elements to keep and change. So Revelation is no different. It isn’t a “direct” sequel to any previous version, although it begins at a familiar enough point. The Horde get a passing mention, but She-Ra does not. And the only indication of the Snake Men is their robot suicide bomber Blast-Attak. Character costumes, meanwhile, split the difference between 1983 and 2002. It’s notable that after the time jump, some of the veteran favorites go around shirtless and scarred, just like the older action figures in a kid’s collection.

The biggest change in continuity is a split with the 2002 series as to what constitutes Preternia and Subternia, which now serve as metaphorical Heaven and Hell. But even that may be a nod to New Adventures of He-Man writer Jack Olesker, who admitted he intended his sci-fi take on He-Man as a biblical allegory.

Voice talents here take things to the next level. Apropos of a fantasy world with deaths, Game of Thrones veterans Liam Cunningham and Lena Headey voice Man-at-Arms and Evil-Lyn, respectively. The former adds grizzled gravitas; the latter a more complex portrait of the villainess as a battered spouse. And if anyone was born to play the grim reaper-ish Scare Glow, it’s Tony Todd. 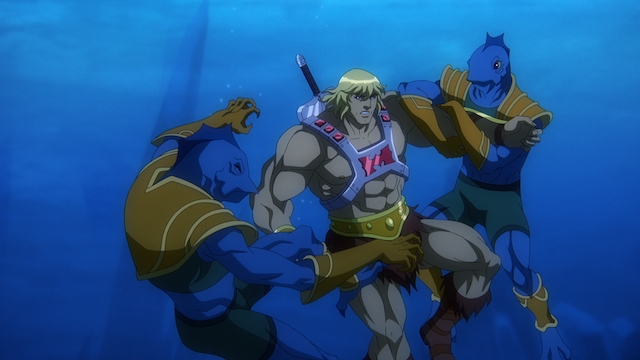 Yet Smith and his writers, including Marc Benardin, Diya Mishra, Tim Sheridan, and Eric Carrasco, seem most determined to rehabilitate Orko. The comedic sidekick always had hints at a potentially more tragic backstory. Griffin Newman’s vocals reveal both the determination and the tears of a clown. Dare we say it…Orko actually gets some of the most genuinely moving scenes in the whole show.

Visually, Revelation takes a bit of getting used to. What look like actual digital scans of the vintage vehicle toys don’t always mesh well with dodgy CG backgrounds and 2-D cel characters, who initially seem limited in poses. Eventually it settles down to a largely 2-D style and the eye adjusts.

The five episodes comprising part one end on a cliffhanger, with no specified date for part two. But one thing remains clear — this isn’t just a show about He-Man doing effortlessly heroic stuff. For that, another, more-CG and kid-friendly cartoon is on the way. That one actually bears He-Man’s name in the title.

There’s a moment where characters say goodbye, and the more pedantic fans might wish that somebody had insisted on “Good journey” instead. But this is a cartoon made for fans who can distinguish a Bionatops from a Battle Lion. It is, thus far, a good journey indeed.