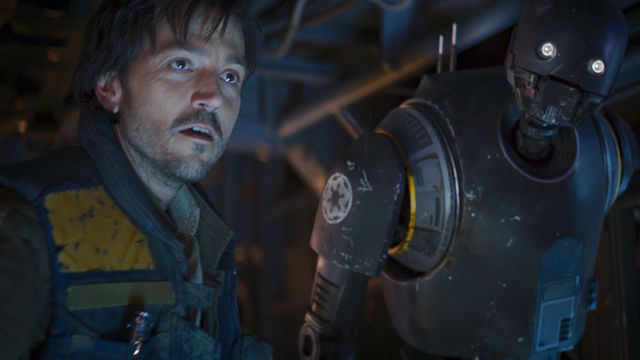 Last month, Disney+ and Lucasfilm revealed the first sizzle reel from Star Wars: Andor, the Rogue One prequel series starring Diego Luna as Cassian Andor. Lucasfilm previously indicated that Alan Tudyk will also reprise his role as the droid K-2SO. However, Tudyk recently told Collider that he won’t be appearing in the first season.

“They’re shooting it right now, I’m not in it. But, if it stays on the air, stories keep getting told, I’ll end up in there,” said Tudyk. “I’m going to be in the show. It’s just that the story that Tony [Gilroy] is telling doesn’t involve K-2SO until later on… I can’t be too specific, but I can definitely say that I’m not going to be in the first season.”

Tudyk also jokingly referred to his onstage presence during the show’s initial announcement.

“I’m [in] all these announcements for the show,” recalled Tudyk. “And I had suggested at D23 when we announced in the show, that it be called K2 Fast K2 Furious: The Cassian Andor Series and, um, that’s not happening, it’s called Andor!”

Additionally, Tudyk expressed his hope that a second season of Andor arrives before he gets too much older. That’s because his elaborate mo-cap suit can be very uncomfortable.

Star Wars: Andor will premiere on Disney+ in 2022.

Are you disappointed that K-2SO won’t be in the first season of Andor? Let us know in the comment section below!

Andor season 2 may be two years away, but showrunner and series creator Tony Gilroy is already offering hints about…
TV 2 months ago

As Cassian Andor and Kino Loy plot their escape from an Imperial prison, Luthen Rael reveals just how far he…
TV 3 months ago

Andor Season 1 Episode 7 – What Did You Think?!

In the aftermath of the heist, Cassian Andor discovers that he can't go home again. Meanwhile, the Empire takes steps…
TV 4 months ago

The showrunner behind Lucasfilm's Andor series explains why he thinks catering to longtime Star Wars fans was the wrong way…
TV 4 months ago
Loading Comments...