The Outsiders kept upping their profile last week, even after Lex Luthor’s calls for a metahuman registry. Lex’s plans aren’t going by the wayside, but this week’s episode of Young Justice: Outsiders withdrew into a more solemn atmosphere. The Fatherbox within Victor acted up again, throwing the brooding hero into a fight for his soul. One in which he couldn’t participate. Violet, Kaldur and Harper had their own emotional struggles to navigate as well. Metron held the key for Victor, but solutions weren’t so easy to come by for the others. Some things just take time. 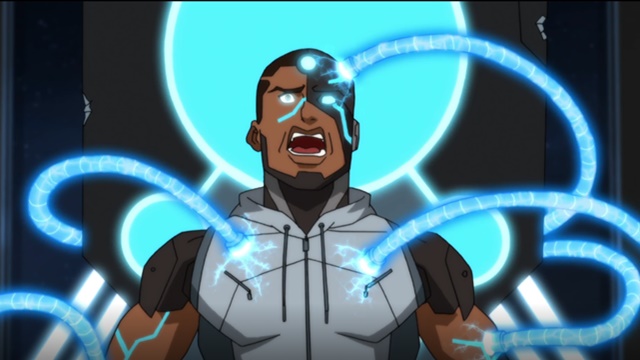 A phone call from Silas sends Vic into a rage that causes him to pass out. Forager finds him and brings him back to the Hub, revealing that the Fatherbox is no longer dormant. It’s trying to take over Victor’s body. Dreamer eyes Metron’s chair as the only treatment for Victor, springing Conner, Jefferson and Forager into action. The three boom tube to the Source Wall and follow Metron into a fight between Superman and a batch of Parademons. Metron agrees to return with them, but not to save Victor.

They return to find Victor further transformed and in a medically-induced coma. Silas’s arrival at the Hub didn’t rub him the right way. Metron reveals that he’s there to watch Fatherbox overtake Victor, prompting Conner and Jefferson to remove him from his chair. Victor takes Metron’s throne and it removes the Fatherbox from his body. Metron confirms that Granny Goodness and Gretchen Goode are one in the same before departing, leaving Victor and Silas to reconcile. 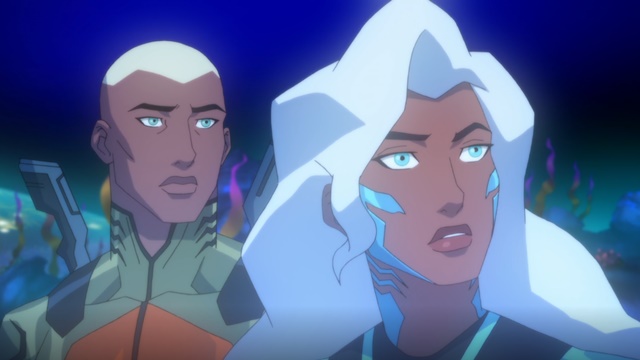 The leader of the Justice League busies himself with the newly arrived water-breathing meta teen. He transports the unnamed teen to Poseidonis to live among the Atlantians. Kaldur introduces her to King Orin, who congratulates him on the Outsiders’ success. The remark causes Kaldur a moment of pained reflection, knowing he helped orchestrate those victories. The unnamed meta takes notice, pointing out that Kaldur is a good man because he felt remorse for lying. She thanks him before exploring her new home. 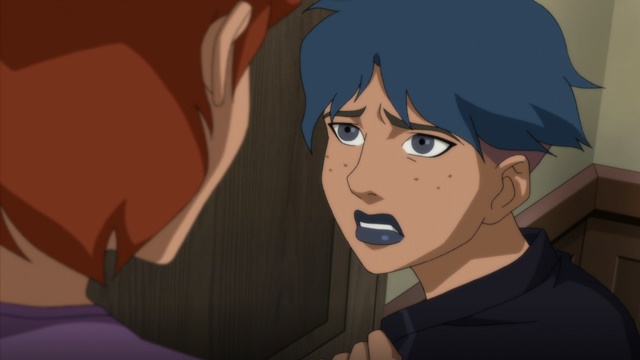 Violet takes advantage of the chaos around Victor’s situation to run away from the Hub. The young meta returns to Gabrielle’s home to set things straight before they die. Gabi’s family is quick to embrace Violet before learning of Gabrielle’s fate and Violet’s relation to her. Gabrielle’s mother is unmoved, offering Violet open arms as the tears flow. She is thankful for the closure Violet brought. Artemis and Terra soon arrive to bring Violet back to the Hub.

Elsewhere, M’gann has a heart-to-heart with Harper after her and Violet’s run-in with the law. She notices signs of abuse on both Harper and her brother, but the young woman’s lips remain sealed. M’gann’s questions about the gun Harper had starts to crack her shell. She mentions having the gun in order to keep it away from the alcoholic in her house. Harper tries to leave, but M’gann talks her down. She doesn’t have to shield her brother from her father anymore. There is a better life. Harper finally admits her father hits her and her brother before falling into M’gann’s arms.

Terra reports back to Deathstroke after the day’s events but doesn’t give him any intel. According to her, there is nothing to report.

What did you think about Young Justice: Outsiders episode 20? Share your thoughts with us in the comment section below!

The next season of Young Justice has its subtitle, but it's anyone's guess where and when Phantoms will make its…
TV 2 years ago

The Young Justice team has finally returned home, but Superboy's first meeting with Naomi may hint at a new threat…
Comics 3 years ago
Loading Comments...