For those already looking to correct that headline in the comments below: look, we know the official names are Ravager Thor, Mighty Thor, and teen Groot. But headlines have a duty to be concise and clear. Jane may now be Thor, but original Thor doesn’t yet have a name other than Thor. He may or may not go with “Odinson,” as in the comics, but that’s a bit like calling Jane just “Foster.” The pictures should make clear which characters are which here in this Marvel Legends Love and Thunder wave.

First off, it’s damn near miraculous in toy terms that with all the supply chain delays and gas price spikes, that the Thor: Love and Thunder toys made it to stores anywhere close to movie release time. And if Hasbro‘s trends continue, they may be the last Marvel Legends we see in plastic blisters. The Spider-Man anniversary figures set for this year come in fully enclosed cardboard boxes, with many priced at $27.99. Enjoy $24.99 visible-in-store figures while you can!

If we must have a price increase, it’s good to report that at least these figures up the quality level. So many times we see hand-painted prototypes, only to find the final product disappointing. These figures look great. And of the three purchased here for review, two seem entirely original, though some of the build-a-figure parts look familiar.

The repaint/resculpt is Groot, who was briefly available in an Avengers: Endgame three-pack with Thor and Rocket. It proved scarce at retail and now goes for over $100 online, so a second chance ain’t bad. Plus there’s added value: Groot has a new head and gun, as well as alternate vine arms and a bonus trigger-finger hand for the weapon. He does not include the data pad from the previous pack. 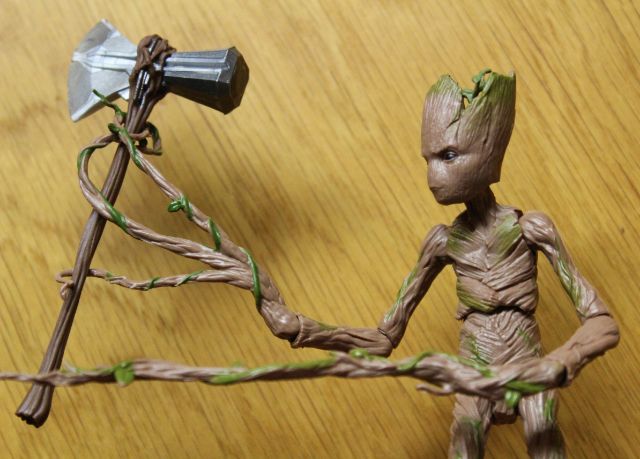 The vines switch out with either hand, and one allows fans to recreate the forging of Stormbreaker’s handle. For a figure so spindly, he’s remarkably durable and poseable.

Chris Hemsworth’s likeness can go a number of different ways when rendered by Hasbro in plastic, but Ravager Thor might be the best yet. Looks like both his eyes go back to blue, and the faux-“Beat It” jacket and jeans look very on point for spare gear Star-Lord might have lying around. 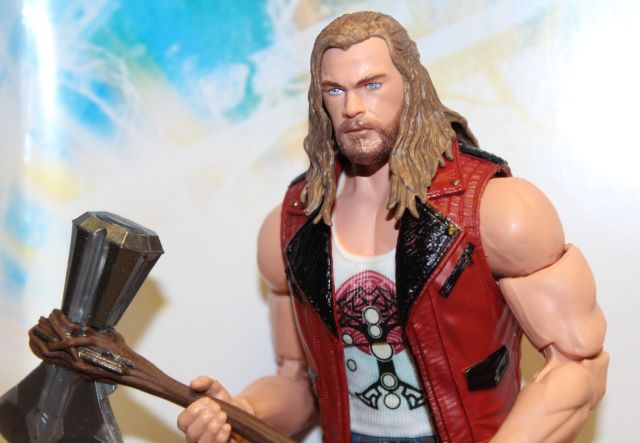 The jacket comes off easily for the full gun show…and a great base body for a custom Big Trouble in Little China Jack Burton, should anyone feel so inclined. Arms and legs both feature pinless joints. Joint tightness is solid. 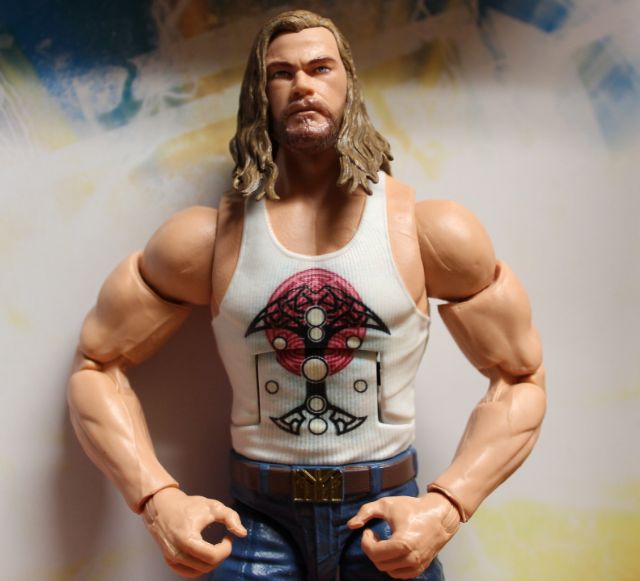 As for Natalie Portman, well, different sculpting teams for different brands and all that, but let’s look at an evolution of sorts… 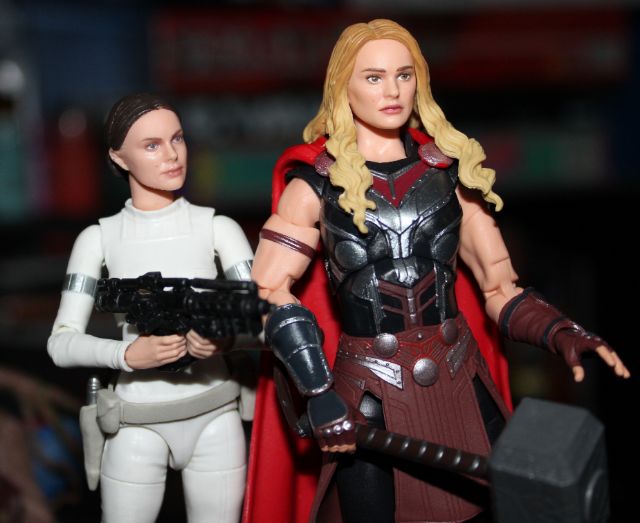 Both heads on “Mighty Thor” capture the basics of her likeness. The color scheme might seem less makeup heavy than some, but fans of Portman will want to pick it up for sure. 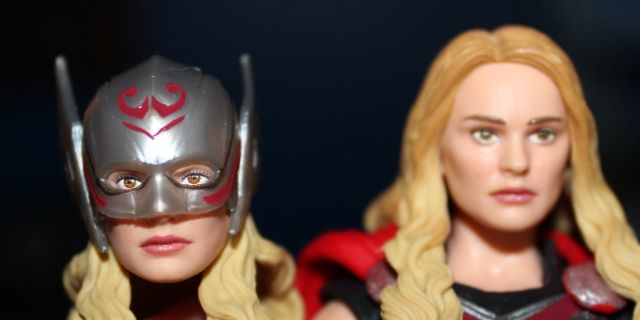 Again: pinless elbows and knees. All-new sculpt. Her height next to Padme proves that “6-inch scale” can be variable indeed — Star Wars 6-inch runs a bit smaller. And yes, her arms are more jacked than the usual Marvel female. Note the cracks in Mjolnir. 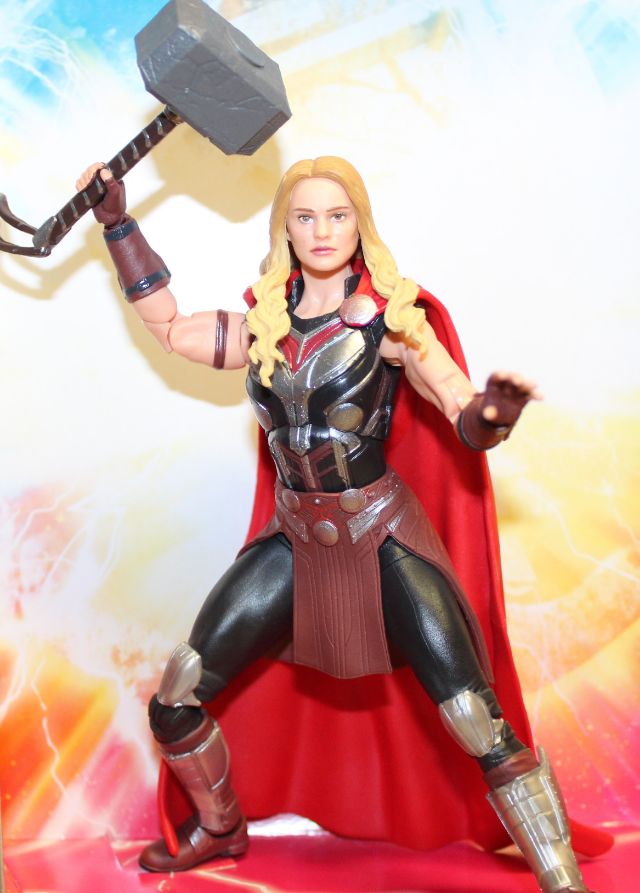 Each of the three figures comes with a piece of Korg, who seems in scale with the previous Korg. Indeed, it looks like they share some parts. But he’s paler now. New Korg apparently requires a wider stance to get the designs on his pants to line up. 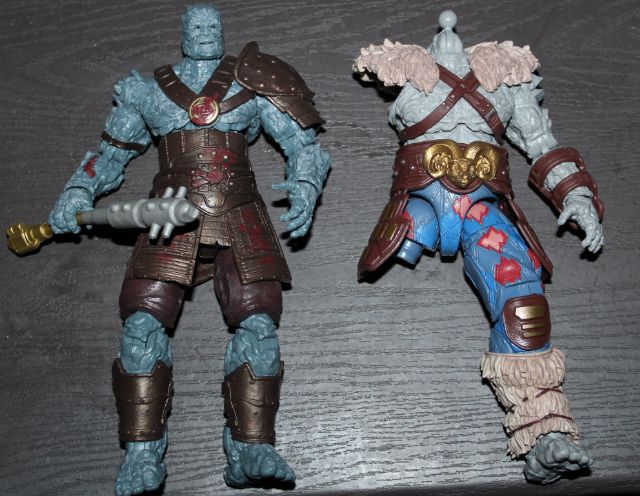 To finish him, one need only buy Gorr, Valkyrie, and Star-Lord. The wave consists entirely of movie figures, with a blue-and-gold helmeted (male) Thor as the sole figure with no Korg bit.

The price increase from what was only recently $22.99 for the Multiverse of Madness figures may give longtime collectors pause, but if you’re still on board for any at all, rest assured that these three are top-notch. And whatever your taste in attractive thespians, either of the Thors, or both, should prove aesthetically pleasing. Entertainment Earth has full cases of eight in stock now (two blue-and-gold Thors), and preorders on some individual figures. Other sites’ availability may vary…or you might actually find some on store shelves now. (Superhero Hype partners with Entertainment Earth, and may earn fees based on purchases made through site links.)

Check out the full gallery below. Then tell us which you like best in comments.