Sometimes, the toy samples for review we get sent group together easily by type. Others, it’s just a huge box of stuff. The latter is very much the case with recent shipments from McFarlane Toys, where we simply got whatever they apparently had on hand to send. So rather than force a theme, we’ll look at them one by one. And find, in most cases, that the characters can usually be attached to either Batman, Superman, or Wonder Woman. But this round also brings us the first McFarlane Toys General Zod. 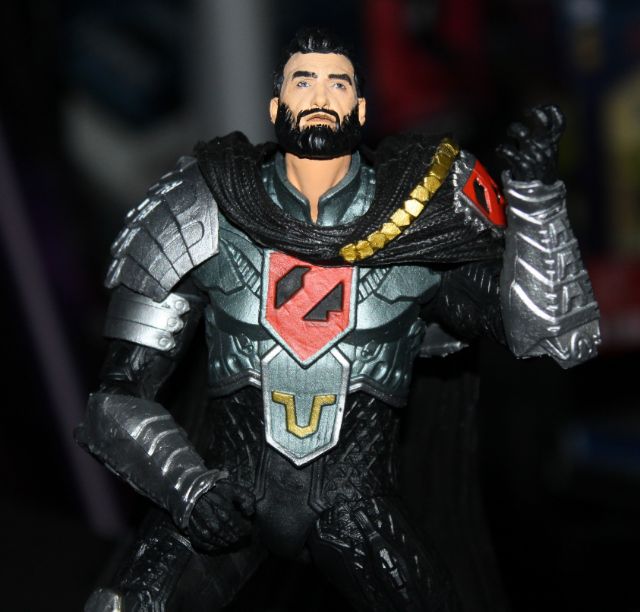 So let’s start with him. Based on the DC Rebirth comics, his design draws from both the Terence Stamp rendition and the Michael Shannon version. With stereotypically evil black beard and intricately sculpted armor, he ought to be a winner. But something doesn’t quite do it on this one. Maybe it’s that the hefty cape makes him back-heavy, so he has to lean heavily forward to balance. Or maybe it’s just a matter of taste. Fans of more “Toy-y” figures might prefer it.

Despite the usual intricate McFarlane sculpt, it lacks washes and weathering to make it look more realistic than the average toy. It’s more basically colored like a comic, and that makes the armor simply read as plastic rather than metal. Customizers might make some decent hay with this one. 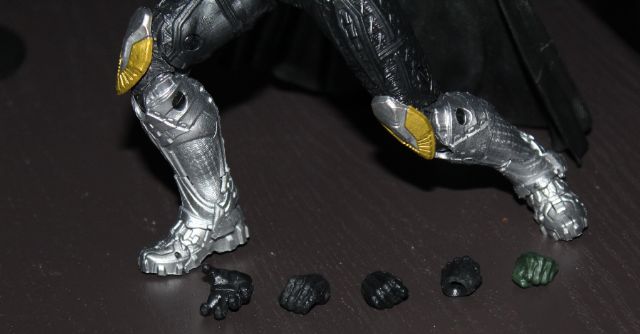 He includes a bunch of extra hands, which seems weird considering he doesn’t include anything to hold. Superman, on the other hand, just has fists; not even the salute/fly pose hand. Of all the figures in this batch, Zod needs those hands the least. Maybe since he has no other accessories, they add perceived value. 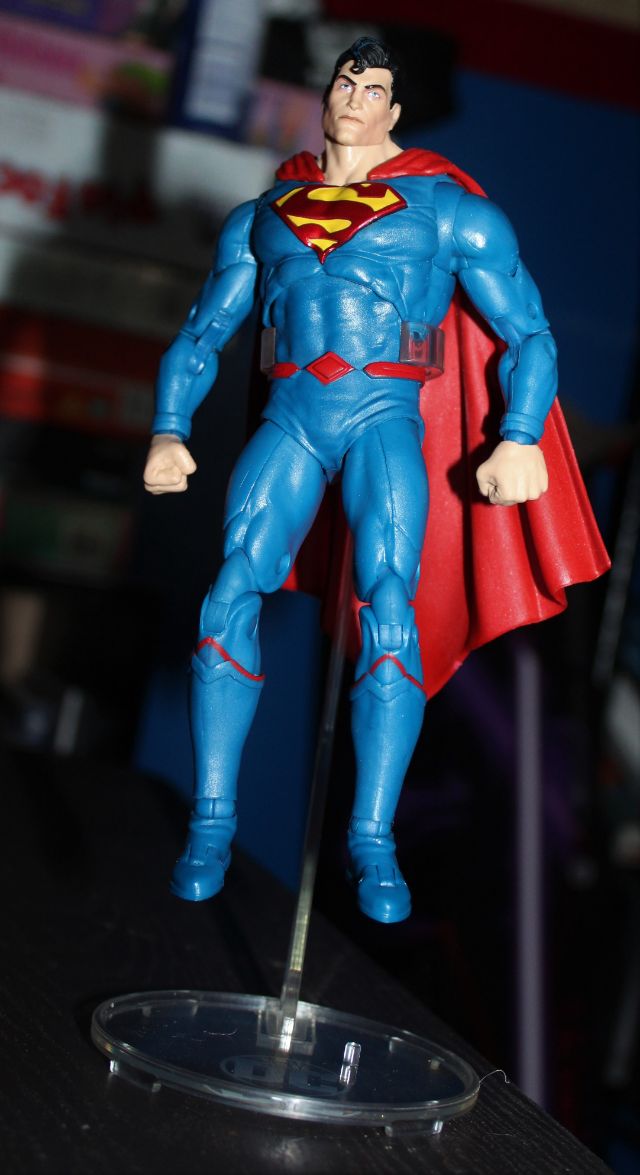 Rebirth Superman is simply a “normal” version of the body we’ve seen McFarlane use for Infected Superman and Bizarro, not to mention the Three Jokers Batman. It’s making him more in line with other current Supermen, looks a little bit like Tyler Hoechlin in the face, and…isn’t necessarily an improvement. But that depends what you like. The more modern costume features less red, and the cape is a diamond-ish shape, wide in the middle and short on the sides. Typically, Superman reverses this, as in the first McFarlane Superman (seen here below in his angry variant from the Doomsday 2-pack). 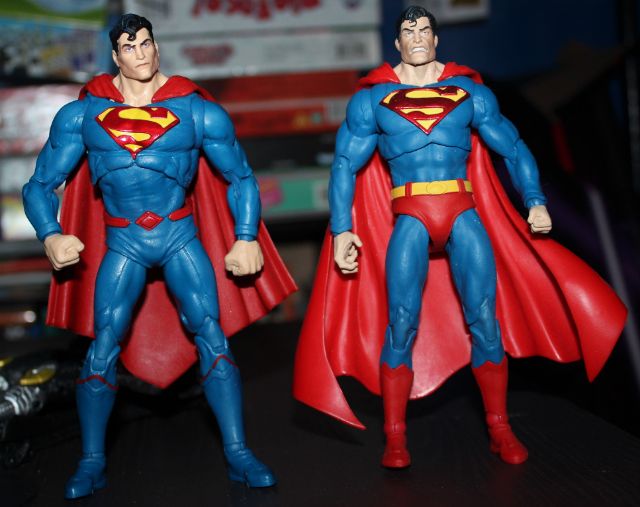 Both keep the S-shield shiny. Both emphasize cloth over muscles in the sculpt, in different ways. It’s really all about which upper body type one prefers, and which color scheme. If neither’s perfect for you, rest assured McFarlane will certainly make more variants. No alternate hands in this one, but we once again get the elegant, very clear McFarlane flight stand. Diamond Select could take a lesson on that design. 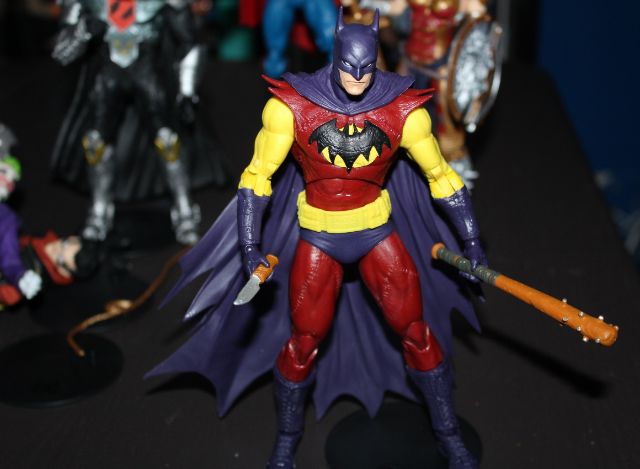 Zur-en-Arrh Batman is a bit like Zod in reverse. His outfit is, objectively and deliberately, possibly the worst Batsuit in modern comics canon. (Though its chest logo looks the most like an actual bat silhouette.) Yet the figure executes it pretty well. There’s some awkwardness — our sample has weaker ankles than usual, which arguably adds to the effect of disoriented Batman. That fits with the current retcon of the design, now for a hidden Bruce Wayne personality, which was originally for a Silver Age alien who modeled himself after Batman.

Rather than simply repainting an older Batman, Zur-en-Arrh has the stitching sculpted in, and a much softer cape to allow the arms and legs more posing leeway. He comes with two very un-Batman-like weapons: a knife and a spiked baseball bat. Not that kind of bat, man! 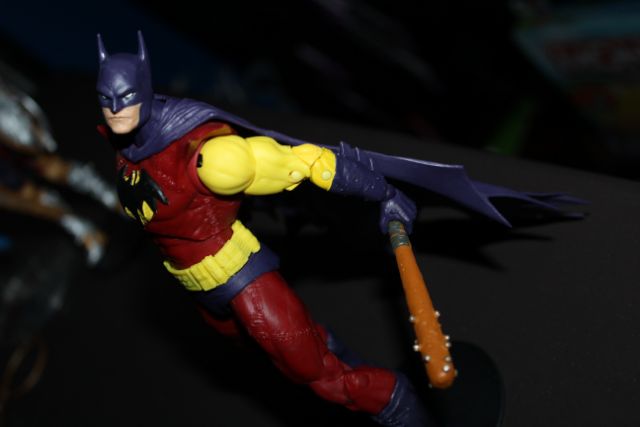 Like the costume itself, this figure really shouldn’t work. But loose joints aside, it somehow does. 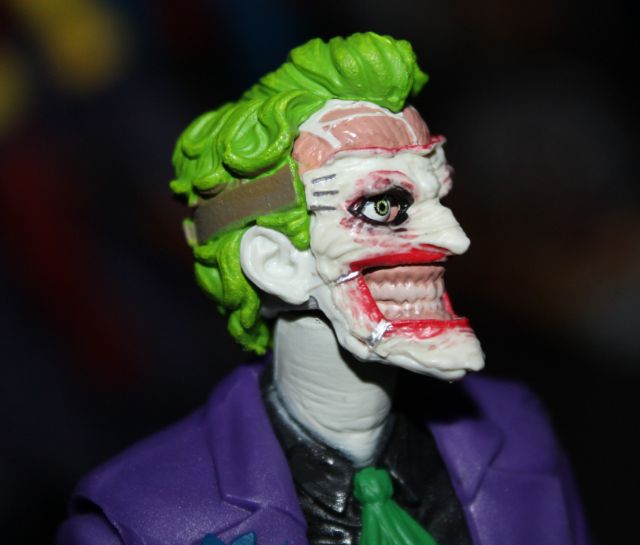 Death of the Family Joker uses mostly recycled body parts, so the real attraction is the head sculpt. And this is where McFarlane Toys goes to town. They haven’t done a Clive Barker action figure in a while, so here, with “Leatherface” Joker, is the chance. And while extreme closeup reveals that the strap doesn’t quite match up to the mask, in either sculpt or paint, the face itself is a nightmare. When we think of how Mattel wouldn’t put an accurate Heath Ledger Joker face sculpt on their Batman figures for kids a decade and a half ago… 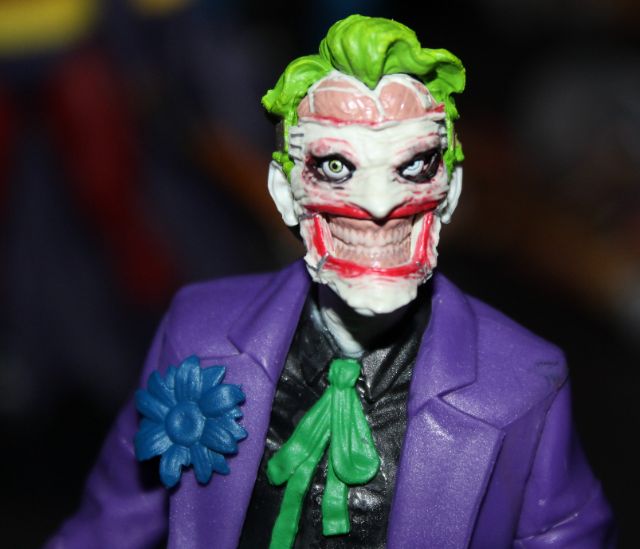 The other item original to this Joker is a BAT-tle axe. Because again, creepy flayed faces are just fine on toys, but guns, never. But if you have almost any other McF Joker, no real surprises here. Everyone’s going to have their favorite McFarlane Joker; ours, so far, remains the bloody Mortal Kombat version, which uses different pieces. 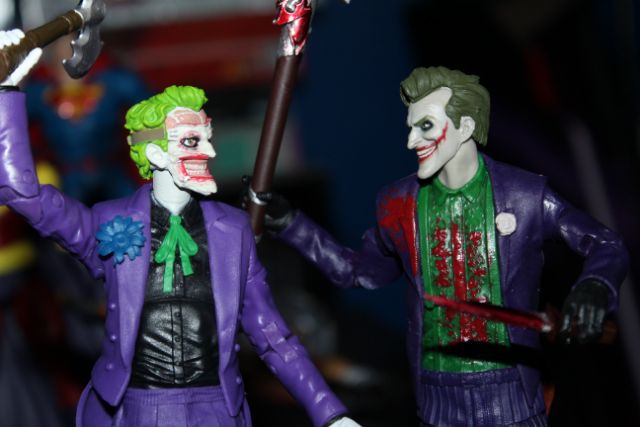 Infinite Frontier Robin looks more cartoony in figure form than in the comics, and doesn’t display as well with the more detailed sculpts of the rest. Also, his ball-jointed legs tend to pop off, and his rubber tunic inhibits the waist and chest articulation. Plus he’s a small figure for the price, but these days, $19.99 seems a bargain for any figure, so he’s still an okay value relative to other lines. 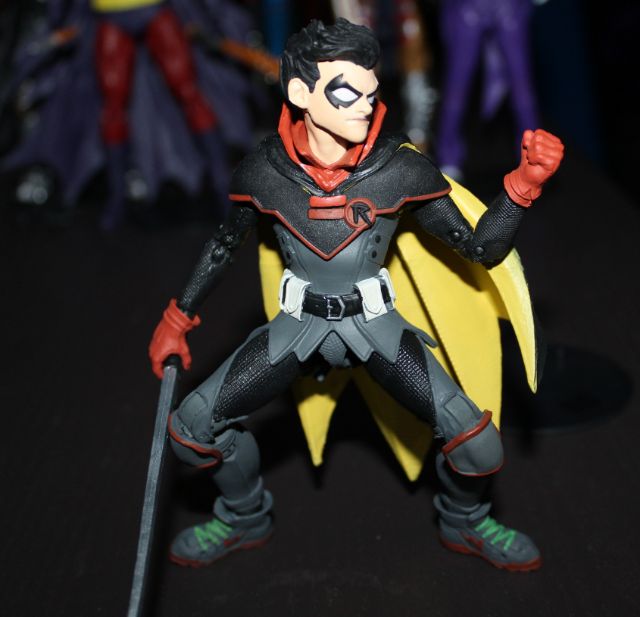 Todd McFarlane’s Wonder Woman redesign, when it initially debuted, looked awful. Much too busy, bold primary colors making it looked drawn in marker, and not really what we’ve come to expect from McFarlane. A new coat of paint, however, makes all the difference. 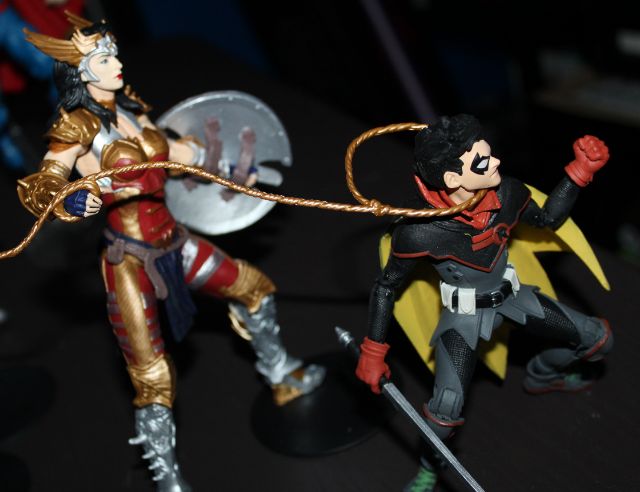 With a more muted palette and actual armor colors, she looks like something out of the Snyder Cut. The sword’s a little oversized, like a video game’s special power weapon, but she reads as an armored-up Amazon now, rather than a kid’s drawing. 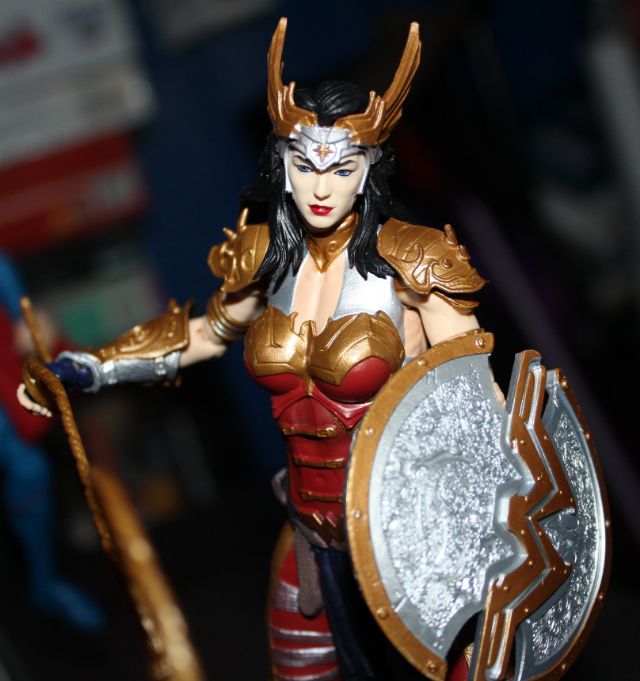 The only design complaint, really, would be the hook on the side of her belt to hold her lasso. That would be great if she had a rolled-up lasso, but the only one that comes with her stays outstretched in a dynamic pose. If Todd’s intention was to have it look alive like Spawn’s chains or Angela’s ribbons, okay. Or walking the invisible dog… 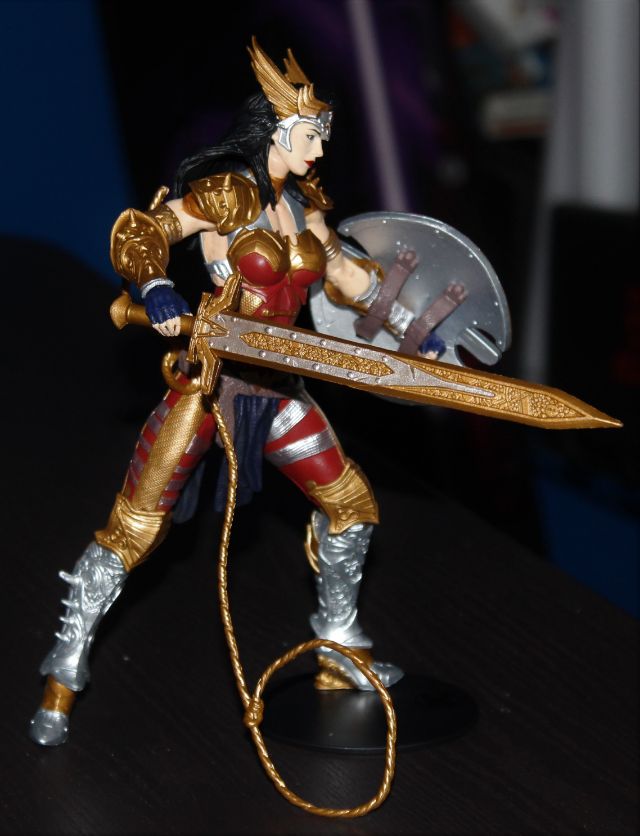 Another improvement over past figures: the shields slides on and off without having to pop her hand off. Both Hasbro and McFarlane induced severe finger pain over the past couple of years via that factor. Thanks for stopping.

As always, Entertainment Earth (and other favorite retailers) offer orders and preorders on most of these figures, but you shouldn’t pay more than $19.99. Entertainment Earth is an affiliate partner with Superhero Hype, which may earn fees based on purchases made through links.

McFarlane sent many more DC figures in the same box, so if you didn’t see your favorite here, stay tuned. Check out the gallery below, then let us know your faves in comments.

We are a participant in the Amazon Services LLC Associates Program. This affiliate advertising program also provides a means to earn fees by linking to Amazon.com and affiliated sites. This is also a sentence. And so is this as well.

A real-life version of Scott Lang's memoir from Ant-Man and the Wasp: Quantumania is hitting bookstores later this year.
News 19 hours ago

The original Boy Wonder swings in.
Geek Culture 5 days ago