As the rest of the world feasted and unwrapped gifts, McFarlane Toys offered up a holiday treat in the form of new wintry-themed action figures. Fronted by Edwald Olfaffson, the Frost King himself, DC’s Endless Winter wave join the already announced Aquaman from the same arc. Frozen in a glacier beneath the Fortress of Solitude, Edwald breaks free following the Fortress’ destruction. And the scattered Kryptonian crystals in the ice increase his already formidable cryokinetic power.

Collect all four heroes to build the Frost King. In a slightly redundant touch, the Green Lantern appears to be just a slight repaint of his previous release. Though he does sport some snow deco and a new sword. But the wave also includes McFarlane’s first Black Adam, as well as winter-wear Batman and Wonder Woman. If any fans aren’t fans of the snow deco, rest relatively assured that McFarlane will reuse and repaint that Adam at some point.

Check out the full wave below: 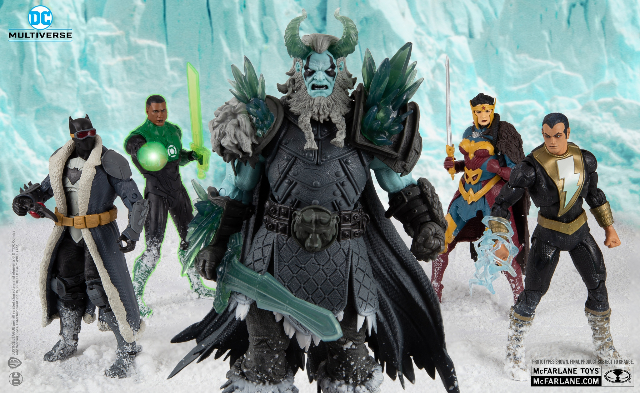 McFarlane Toys with build-a-figure pieces typically run $24.99 each. But since we’ve recently seen some price increases in their other lines, don’t act too surprised if this wave goes a little higher. In the company’s usual fashion, we can probably expect preorders later in the week following initial reveal.

Will you preorder this wave? Let us know in comments.