Invented by African-American mother Yla Eason in 1985 when her son was unable to find any superhero toys that looked like him, Sun-Man was a rare independent action figure years before McFarlane Toys would spawn a boom in such things. Built in the style of Masters of the Universe, he never quite spawned a larger figure line as planned. But he did lead to the creation of Olmec Toys, which later made the G.I. Joe-like Bronze Bombers, and historical toys based on Martin Luther King Jr. and Malcolm X. The tie-in storyline depicted Sun-Man as a royal prince, who fought the villainous green swine creature Pig Head.

RELATED: Preorders for Mondo Masters of the Universe Hordak Variant at Power-Con

Today at Power-Con, He-Man arguably paid Sun-Man the ultimate compliment. As of now, he joins the Masters of the Universe canon, officially. ’80s kids who owned the figure would have played with him alongside Masters characters already. This merely formalizes the head-canon they all had. And to kick things off, Sun-Man will get his own Masters of the Universe Origins figure, available on Mattel Creations’ website starting Monday, Sept 13. 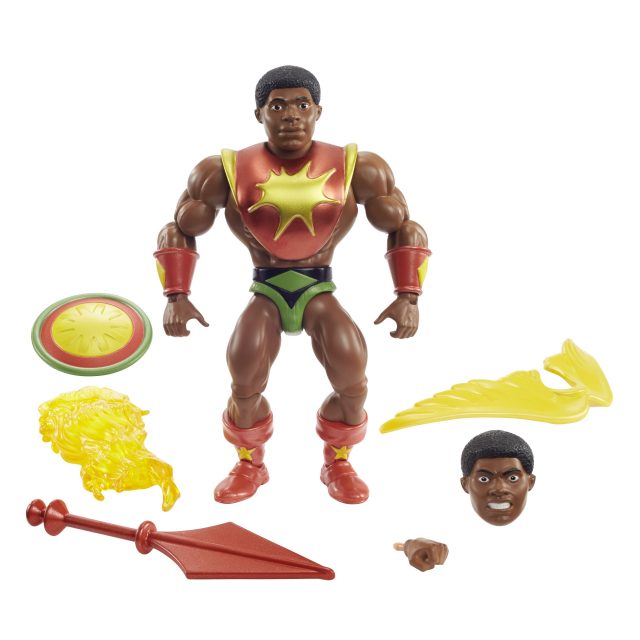 In keeping with the style of Origins, this Sun-Man figure is meant to look like the original as closely as possible, but with added articulation. He adds an extra head, however, and weapons with a removable flame effect. Moreover, the packaging imitates the style of the original Sun-Man, and comes with a mini-comic that depicts his battle with Pig Head. And a suggestion he’ll fight more familiar villains next. As a premium, exclusive-run figure, he’ll cost $35.

Take a look through the gallery below for more images of Sun-Man. Will you pick up this exclusive throwback figure? Let us know in comments.

At long last, the next stage of DC film and TV projects have been revealed, including Superman Legacy, Batman and…
Movies 17 hours ago

Mondo Toys Shows Off 1:6 Scale Masters of the Universe Panthor