Toy Review: Back to the Future Ultimates Wave 2 by NECA

Great Scott! Christopher Lloyd’s Dr. Emmett Lathrop Brown finally made it to NECA‘s Back to the Future Ultimates line. Though it’s an unexpected choice for the first screen-accurate figure. A 1955 Doc…without the “mind-reading” helmet? We can only assume that’ll come later in some other form. Doc’s most iconic looks are arguably the white lab suit from 1985, and the mirror-shades from 2015; the latter is confirmed. This outfit is way more basic, but it does feature two incredible Christopher Lloyd portraits that make the sale.

Yes, the welding goggles are removable. However, the head must come off first in order to remove them. Due to Doc’s ungainly coif, the goggles fit in a groove underneath, on both heads. The eyepieces are opaque, but with a shiny finish. 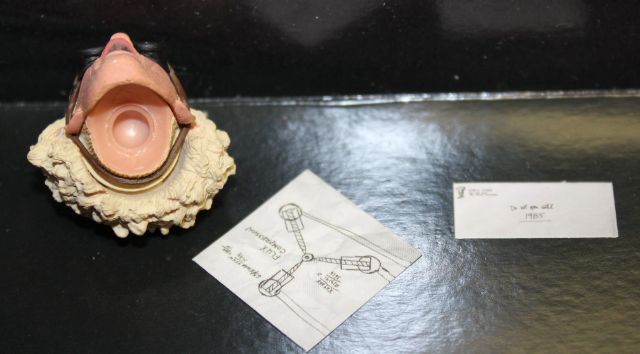 Also included with the Doc are paper replicas of the Flux Capacitor drawing, and Marty’s letter about the future. Both are printed on both sides with paper deco (a nice unexpected touch), while the blueprint for the Brown house is just one-sided. Doc also includes a monkeywrench and two sets of hands (gloved and bare). 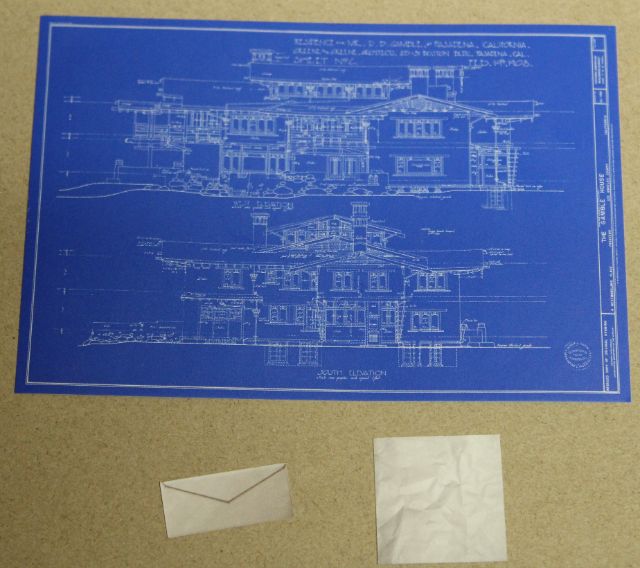 Like the rest of the figures, Doc has double ball-jointed elbows. This allows for lots of really expressive poses, but the trade-off is that it breaks up the jacket sculpt in a big way. You decide if that works or not. They’re certainly not smooth joints, but Doc has to gesticulate wildly. It arguably creates a pseudo-straitjacket effect. 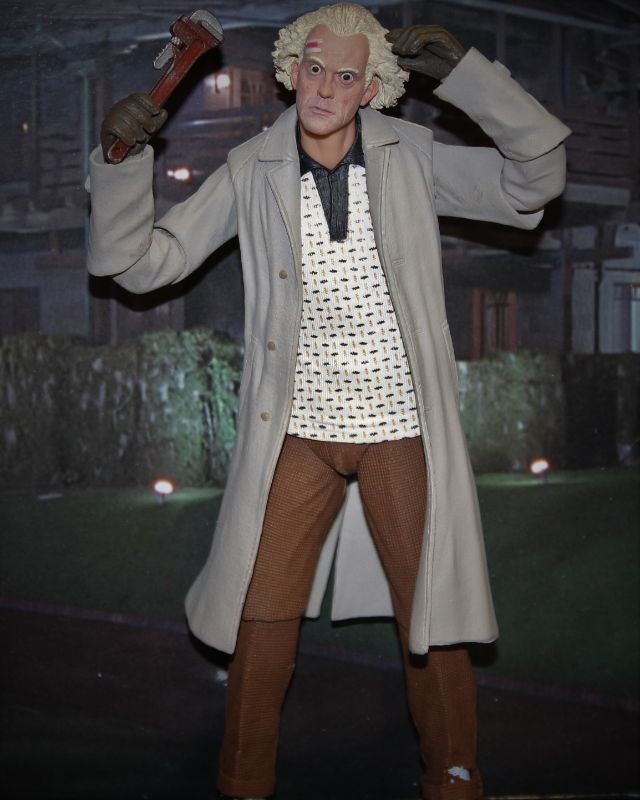 As some fans have noticed, his pupils look very large, without distinguishable irises. This can imply that Doc is tripping balls. 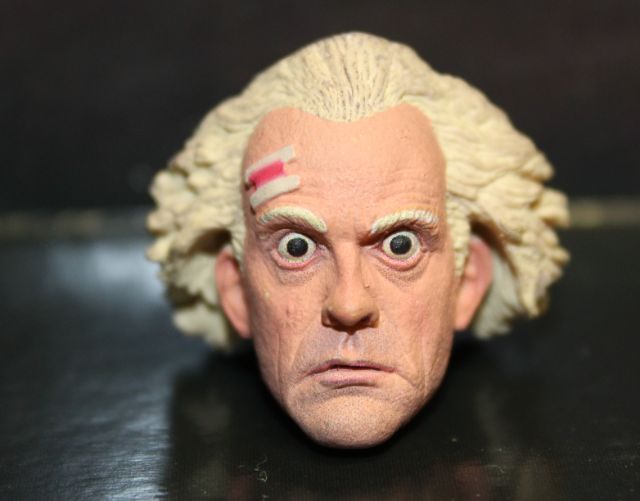 Note the headwound differences. Staring Doc has a bandage from his toilet injury, while screaming Doc just sports a smaller spot. Both are uncanny in their depiction of the actor. 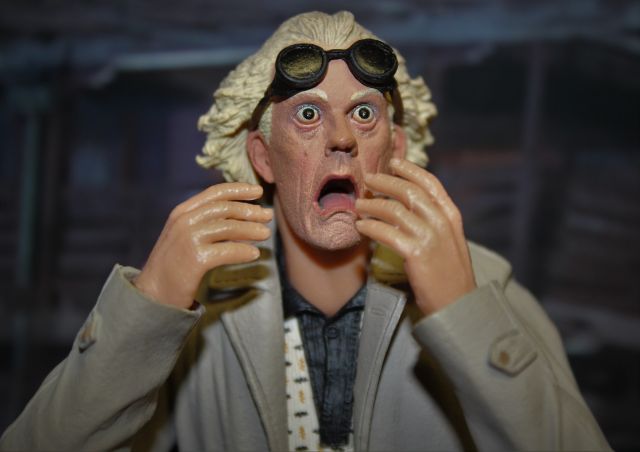 Audition Marty, who debuted at Walmart for a month before going wider, is mostly a kitbash. He’s essentially the same figure as the (outstanding) regular 1985 Marty, minus the red vest, and the tabs on the denim jacket that plug into the red vest. His heads are from both that Marty and Tales From Space Marty — see the comparison below:

The appeal for collectors and completists will be in the new accessories. He includes a guitar accurate to the audition scene rather than the opening giant amp scene. Plus he gets a “Save the Clock Tower” flier with Jennifer’s number on the back, and a family photo. And even though it’s not accurate to this scene, he includes a disappearing right hand, for those moments when history threatens to erase. 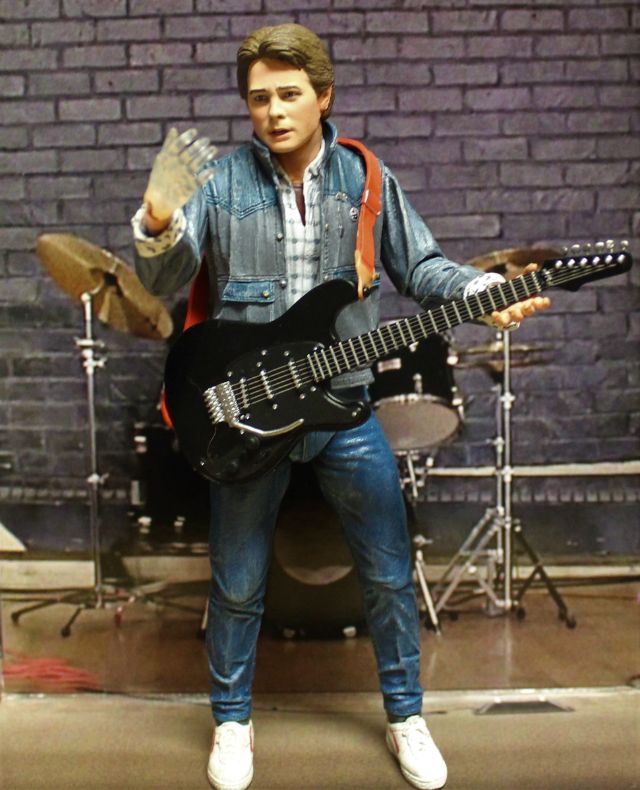 There are minor color differences, too. This Marty’s pants look darker. 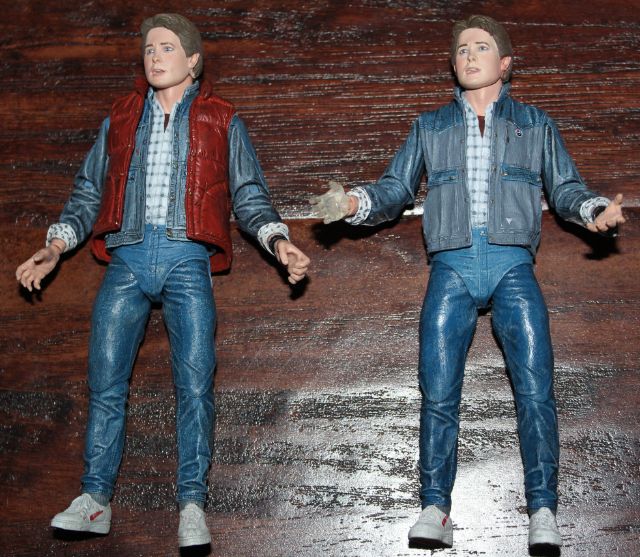 Both Doc and Marty retail for $29.99 or more. Thanks to NECA teases, we already know the next wave should include 2015 Doc and Griff Tannen, who should make for visually vibrant selections. Audition Marty may not be a must-have, but for anyone considering buying two 1985 Martys to display both looks, this makes a more interesting alternative. The must-have versions of Doc may not include this one, but the heads alone will prove worth it as long as all the others come with different expressions.

Check out the gallery below for more detailed looks at both.

Will you pick up this Doc and Marty? let us know your thoughts in comments.

Back to the Future Wave 2

Items that ought to have been included with previous figures, but simply proved too costly.
Geek Culture 3 months ago
Loading Comments...