PlayStation has revealed that Arnold Schwarzenegger has reprised his Predator character Dutch in the new Predator: Hunting Grounds by lending his voice in the game’s free update and paid DLC!

In a blog post written by Jared Gerritzen, the Chief Creative Officer of the game’s developer Illfonic, it was revealed that players will be able to explore Dutch’s story in the universe in two different ways. The first is a free update, available for all players who own the game. Learn where Dutch has been all these years and hear his story in his own words through a series of voice tapes that players will earn as they level up.

The second is a paid DLC pack where you can play as Dutch and get early access to the QR5 “Hammerhead” Rifle and Dutch’s knife (available free for all players later in June). The free update and the paid DLC will be available on May 26.

Gerritzen also revealed the company has free updates and paid DLC’s coming in the months ahead with plans to introduce new weapons, game modes, and more. For the various paid DLC, players will get access to more themed character packs — Dutch is just the beginning.

Hunting Grounds drops you straight into the Predator universe through a new competitive online multiplayer experience.

In the game, an immersive asymmetrical shooter set in remote areas, the Predator stalks the most challenging prey. Play as a member of an elite Fireteam and complete paramilitary operations before the Predator finds you. Or play as the Predator to hunt the most worthy prey. Choose from a vast array of deadly alien tech to collect trophies, one by one.

The Predator’s mission is clear: The Hunt. First, study the warriors in the jungle and choose the best of the best to engage. Next, dispatch targets and collect trophies to display as tokens of each hunt. Do not let the prey escape. Failure is not an option. 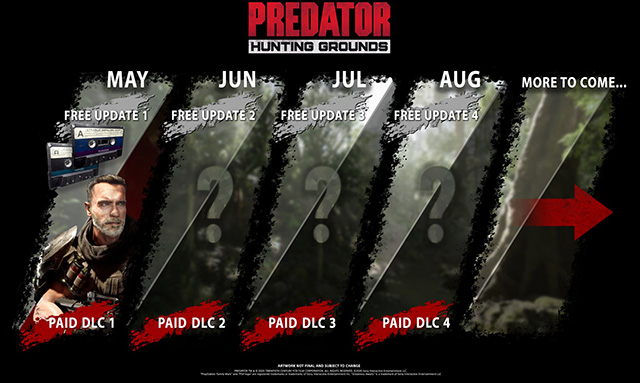 With more to come, what update do you think will be next? Let us know in comments.

Comanche Take on a Predator in the Newest Prey Trailer

Hunt to live. Live to hunt.
Movies 8 months ago

Director Shane Black has made it a point to say that The Predator will be a direct sequel to the first two movies,…
News 6 years ago

Earlier today, it was revealed that the title character from the fan-favorite series “Predator” would be a playable character in…
News 8 years ago
Loading Comments...