Warning: There are spoilers ahead for She-Hulk: Attorney at Law episode 9!

For a few minutes, She-Hulk: Attorney at Law viewers may have been convinced that Marvel Studios president Kevin Feige was about to make his first cameo in the MCU. Within the season finale, Jennifer Walters/She-Hulk escapes into the real world and confronts her writers about the poor script. In turn, the writers reveal that the finale was the design of “Kevin.” However, the Marvel Studios figurehead wasn’t Feige, it was an artificial intelligence known as the Knowledge Enhanced Visual Interconnectivity Nexus. Or K.E.V.I.N. for short.

However, Feige did not provide the voice of his A.I. counterpart. During an appearance on the Phase Zero podcast, She-Hulk head writer Jessica Gao confirmed that Feige turned down the opportunity to have a vocal cameo. He was also against K.E.V.I.N. wearing a hat similar to his own signature black baseball cap.

“We campaigned very hard for Kevin to do the voice, recalled Gao. “And he refused [laughs]. We did get into a fight over the hat, because in the script, ‘She-Hulk enters the inner sanctum and there is this huge…HAL 9000 type of AI machine, and that’s K.E.V.I.N.. It says in the script, ‘the machine is wearing a little black baseball cap on top.’ The pre-vis team had started mocking up all different kinds of versions of K.E.V.I.N., and they all had a little black baseball cap.” 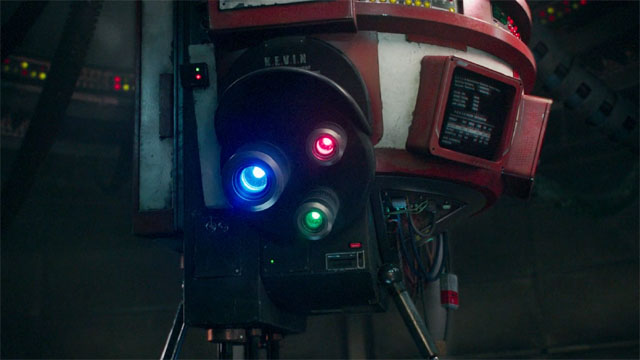 RELATED: Kevin Feige Pushed For the Introduction of [Spoiler] In the She-Hulk Finale

“Then real Kevin says…’It doesn’t make any sense why a machine would wear a baseball hat… You can’t do it,'” added Gao, before revealing how the impasse was settled.

“Sweet Jackson Sze, from pre-vis, ever the mediator and hard worker, gently suggested ‘What if they incorporate into the design of the machine something that would read as a baseball hat?’ And then Kevin was like ‘Oh, I’m okay with that. If it’s part of the machine, of course.’ So that was our comprise.”

In a separate interview with Variety, Gao indicated that she’s not in favor of returning to K.E.V.I.N. any time soon.

“I like when K.E.V.I.N. says that the glitch has been fixed, because I don’t want every character in the MCU to [be able to] confront him about their plotlines,” noted Gao. “So I’m hoping that it’s a one-time thing. We now know that it exists, but I don’t think that we should revisit it all the time.”

What did you think about K.E.V.I.N.’s appearance? Should Feige have provided the voice? Let us know in the comment section below!

After announcing a slate of new projects, James Gunn addressed Ezra Miller and Gal Gadot's future in the DC Universe.
Movies 23 hours ago

With shooting set to begin at the end of the month, Colin Farrell has confirmed the episode count for his…
TV 24 hours ago

Look Behind the Scenes of She-Hulk: Attorney at Law’s Special Effects

Now that James Gunn is set to take over DC Studios, the director has revealed that he informed his old…
Movies 3 months ago

During the premiere for Black Panther: Wakanda Forever, Kevin Feige playfully reminds DC Studios' James Gunn that he still has…
Movies 3 months ago

Charlie Cox Credits the Save Daredevil Campaign For His MCU Return

With Daredevil: Born Again set to arrive in 2024, find out why Charlie Cox credits the "Save Daredevil" campaign for…
TV 4 months ago
Loading Comments...