Warning: There are spoilers ahead for She-Hulk: Attorney at Law episode 9!

When a ship from Sakaar showed up in the first episode of She-Hulk: Attorney at Law, many fans successfully predicted that the Hulk’s son, Skaar, would make his live-action debut in the series. That prediction was proven true when Bruce Banner/Hulk returned in the She-Hulk finale and introduced his grown child to his extended family. In a new interview with Variety, the She-Hulk creative team revealed that it was Marvel Studios chief, Kevin Feige, who pushed for Skaar to appear in the series.

“From the beginning, we often talked about if there would there be a cameo at the end or, in typical Marvel fashion, would we tease a new character at the very end,” said Jessica Gao. “A big cameo would be completely dependent on who was available and who was willing to do it, and you can’t really bank on that at the script stage. We talked a lot about what character we could tease. Ultimately, it was Kevin who decided it should be Skaar. His look is all Kevin Feige.” 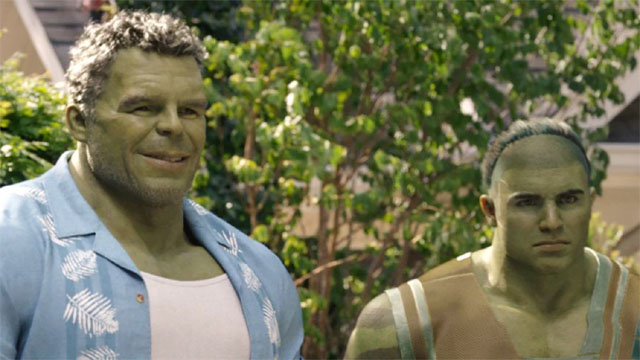 RELATED: She-Hulk: Attorney at Law Episode 9 – What Did You Think?!

Actor Wil Deusner portrayed Skaar in his brief appearance. However, he had no lines and and it’s unclear if Deusner will reprise the role again. Regardless, Gao insisted that she is in the dark about any future plans for the character. She also touched upon the other cameos in the finale.

“Kevin was very specific about with Skaar,” noted Gao. “So I’m sure there’s some plan in the future, though I have no idea what that might be. We all knew that Daredevil had to come back because people love him and their chemistry is so great. I only wish that Patty Guggenheim as Madisynn had come back in the finale. That’s my great regret.”

Within Marvel’s comic book universe, Skaar and his brother, Hiro-Kala, were the children of Hulk and an alien woman as Caiera the Old Strong. Caiera was killed in an explosion that devastated Sakaar, but she managed to protect her two unborn children. If Skaar is in the MCU, it stands to reason that Caiera is as well. But there’s also no indication that Hiro-Kala exists in this timeline.

What did you think about Skaar’s first appearance in the MCU? Let us know in the comment section below!

Her eyes are up there.
Geek Culture 2 months ago

Look Behind the Scenes of She-Hulk: Attorney at Law’s Special Effects

Charlie Cox Credits the Save Daredevil Campaign For His MCU Return

With Daredevil: Born Again set to arrive in 2024, find out why Charlie Cox credits the "Save Daredevil" campaign for…
TV 3 months ago

Head writer Jessica Gao reveals that she considered bringing Tim Blake Nelson back to the MCU in an early pitch…
TV 3 months ago
Loading Comments...