Arrow Series Finale – What Did You Think?!

Warning: There are spoilers ahead for the final episode of Arrow!

Oliver Queen, you have saved this city…with some selective changes to history. The series finale of Arrow illustrated that by showing an alternate version of Moira Queen’s fate from season 2. Instead of getting murdered by Deathstroke, Moira was saved by Oliver. Somehow, Oliver also engineered the survival of Tommy Merlyn, Quentin Lance, and Emiko Queen…but not the real Laurel Lance. Explain that one, Oliver! Now that this chapter of the Arrowverse is over,  we want to hear what the Superhero Hype community thinks about it!

One of the biggest moments of the finale came near the end, when John Diggle finally encountered an Emerald object from beyond the stars. It would have been even better if the ring had said “John Diggle, you have the ability to overcome great fear. Welcome to the Green Lantern Corps.” 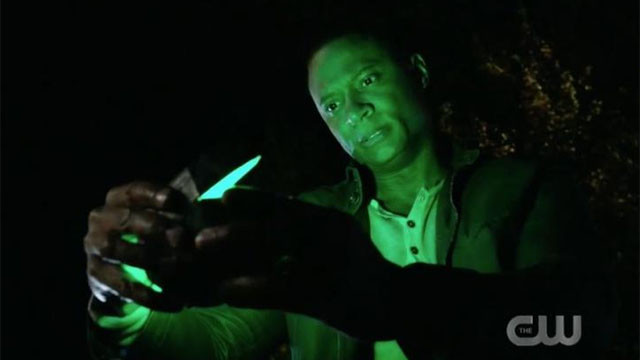 Diggle played a fairly large role in the finale as the flashbacks shed more light on how he influenced Oliver’s evolution as a hero. Diggle showed Oliver that he didn’t have to kill people like John Byrne to save his city. In the present, Byrne kidnapped Oliver’s son, William, and tried to take his revenge. Note that Byrne also shares his name with a very famous comic artist and writer.

The final episode gathered the surviving members of Team Arrow one last time, including a visiting Mia Queen from the future. However, it didn’t resolve last week’s cliffhanger that saw 2040 William kidnapped and John Diggle Jr. restored to his Deathstroke persona. That will be saved for the potential Green Arrow and the Canaries spinoff series. Additionally, the Monitor took Felicity directly to the afterlife. Felicity soon found Oliver in a familiar location, as they prepared for eternity with each other.

What did you think about the Arrow series finale? Share your thoughts in the comment section below!

Ahead of Ant-Man and the Wasp: Quantumania's opening, producer Stephen Broussard says talk about Ant-Man 4 has already begun.
Movies 17 hours ago

The secret is out.
TV 4 weeks ago

The Flash season 9 will welcome back a few familiar faces, including David Ramsey, Keiynan Lonsdale, and Sendhil Ramamurthy.
TV 1 month ago
Loading Comments...