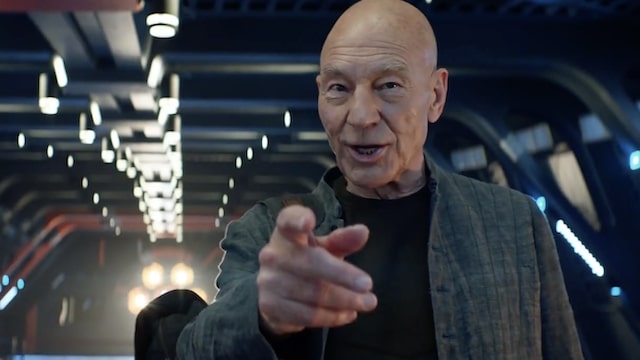 CBS All Access debuted a new Star Trek: Picard trailer during San Diego Comic-Con – and it didn’t disappoint. Patrick Stewart is returning to his iconic role, but he’s not the only familiar face.

In the trailer, a young visitor comes to see Picard, and he realizes that she has ties with his past that will put her in serious danger. Picard reluctantly needs the help of a new crew, along with some old friends. Among them is Seven of Nine, once again portrayed by Jeri Ryan. She was a former Borg who previously appeared in  Star Trek: Voyager.

But that’s not all – Data is back! Brent Spiner is also reprising his role as Picard’s cybernetic colleague from Star Trek: The Next Generation. Data’s fate in Star Trek: Nemesis is touched upon, but his story may not be over yet.

And finally, Jonathan Frakes and Jonathan Del Arco are back as well! Frakes, as many remember, served as William Riker on Star Trek: The Next Generation.Then there’s Del Arco, who will once again return as the former Borg drone named Hugh.

However, fans probably shouldn’t expect its premiere anytime soon. The trailer notes that the show won’t arrive until sometime in 2020.

What do you think about Data and Seven of Nine joining the show? Let us know in the comments below!

In the final trailer for Star Trek: Picard season 3, the TNG crew of the Enterprise is back for the…
TV 5 days ago

Make it so, one more time.
TV 2 weeks ago

Super7 will bring Star Trek: The Next Generation figures into its 7-inch Ultimates line.
Geek Culture 3 months ago
Loading Comments...