Young Justice Outsiders’ months-long hiatus came to an end with a taste of things to come. The first half of the season left off with the return of the Light, a realization about Granny Goodness’ true intentions and Tara’s infiltration of the Team in service of Deathstroke. And the show picked up right where it left off. Dick believed his new recruits worthy of joining the Team’s ranks, though Vic remained distant. But the battle to rescue young metas and restore the Justice League name continued in deep space. Once again, Granny Goodness was at the center of it all, delivering on her unending dedication to Darkseid. Things are just getting started. 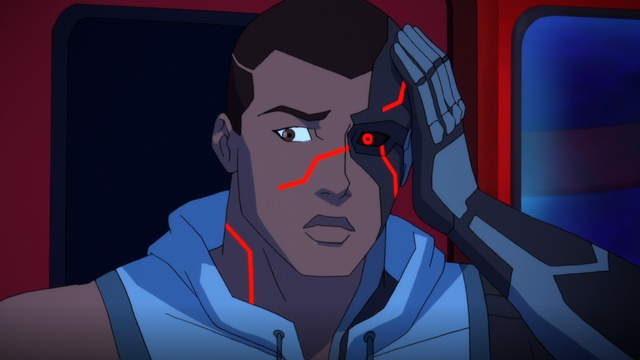 Things remain complicated politically regarding the role of the Justice League in foreign affairs. Kaldur’s public condemnation of Gretchen Goode’s Goode Goggles leads to a call to investigate her company. The Justice League also reiterate their need for autonomy from political regimes. But that mobilizes Lex Luthor and Goode into damage control. Luthor calls for better communication and oversight of the heroes while Goode blames the nefarious VR headsets on her conveniently deceased head of R&D. Luthor also reveals his divestment of Lexcorp to his sister, Lena, though the company and Goode enterprises continue to donate to the meta youth center.

That political cloud doesn’t hover over Mount Justice, though. Instead, Dick assembles his trainees to inform them that he believes their ready to join the Team’s covert ops unit. But Vic isn’t that into the idea. He remains resistant and conflicted until Helga offers him aid. She wants to help Vic come to terms with himself and his existence. Deathstroke learns of this offer as well thanks to an eavesdropping Tara. 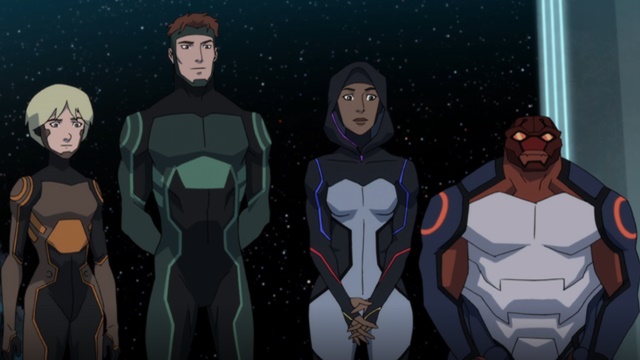 Vic may be on the fence, but the rest of the crew are totally in. Violet, Brion, Forager and Tara are formally inducted into the Team at the Watchtower. The moment provides Violet with a chance at introspection, revealing that she questions her gender identity. She isn’t Gabrielle anymore, after all. 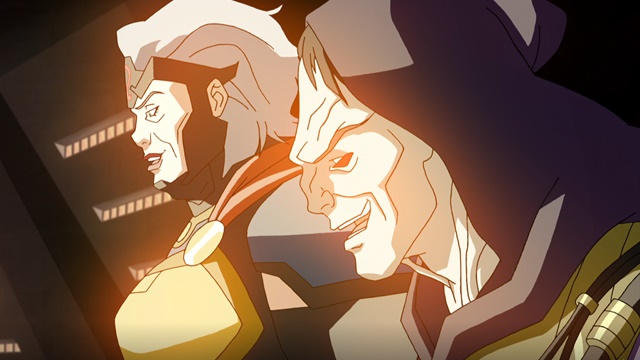 Unbeknownst to them, the Justice League is inadvertently fighting that battle already. A survey of an nth metal theft on Thanagar leads Superman, Wonder Woman, Guy Gardner, Hawk Woman and Hawk Man to an asteroid base. The trail is revealed to be a trap set by Barda, but Granny Goodness reprimands her for initiating conflict without direct orders from Darkseid.

Regardless, the heroes are on her doorstep, so she orders an assault on their ship. Superman, Wonder Woman and Hawk Woman find their way into the base, but Barda and the Furies confront them. Their battle is short-lived as Granny Goodness activates an experiment sonic weapon, harming friend and foe alike. Superman saves Barda and destroys the control panel, but the trio is teleported into open space as they attack Granny Goodness. Guy quickly bubbles them, but their opportunity to attack is gone. The base disappears into a boom tube, leaving the heroes with no trail.

What did you think about Young Justice: Outsiders episode 14? Share your thoughts with us in the comment section below!

As Zack Snyder's Justice League hits digital, a new report sheds light on the continuing feud between the director and…
Movies 7 months ago

Superman, Batman, and other DC heavyweights appear in new characters posters for DC League of Super-Pets.
Movies 7 months ago

Orion and the New Gods are teaming up with Rocket as the second half of Young Justice: Phantoms gets a…
TV 12 months ago
Loading Comments...