NECA‘s flasher Gremlin was originally intended as a Loot Crate exclusive figure, one that would also come with an interchangeable female aerobics outfit for a totally different look. They soon found out Gremlins didn’t command the same level of instant sellout as exclusive Ninja Turtles, and the Gremlin failed to hit the minimum buyer commitment needed. Instead, he’s coming to store shelves, still with plenty of accessories, but missing the workout clothes. NECA’s Gremlins do tend to sell out at brick and mortar stores, so make like Rand Peltzer and take it home right away if it hits the local store. Let’s look at the Gremlins Ultimate Flasher figure. 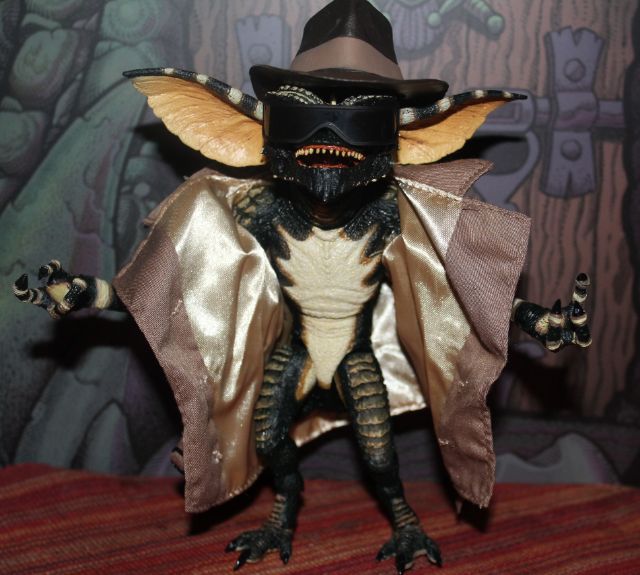 The flasher Gremlin is a sight gag in the movie Gremlins. He has no junk to show, since Gremlins reproduce asexually by getting water on themselves. But as quickly as they are hatched from the pupae in which they grow from Mogwai, they immediately start modeling the absolute worst of human behavior. This particular figure comes packed with vices — smoking, drinking, gambling, and intended indecent exposure. He also has a puppet and a hammer, for a brief attempt at slapstick humor.

Most of the Gremlins in the first film looked basically the same, and such is true of NECA’s figures as well. But they’re not easy to find, generally speaking, and even if they were many collectors want to build an army. And for anyone who has ever wanted a Gremlin toy since the ’80s — you need one. Detailed down to every scale, and fully colored and poseable, NECA’s Gremlin is a toy dream come true. While they are around seven inches like most NECA horror figures, they fit in better with the larger quarter-scale characters, since a regular Gremlin would be around 28 inches tall. 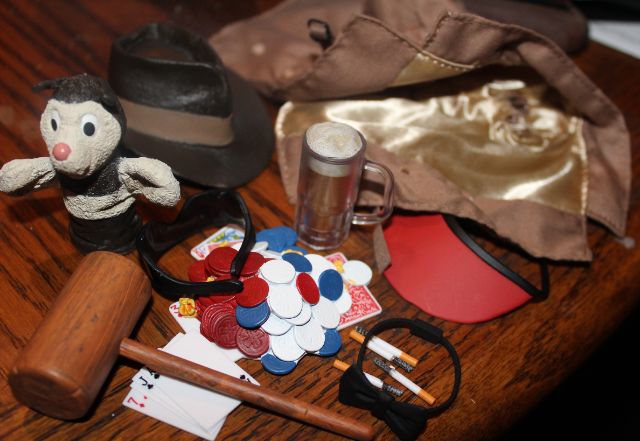 Articulation-wise, the Gremlin sports four pin-and-disc ball joints in each leg, three in each arm, and a double ball in the torso and neck. Ears are on pin-and-disc ball joints also, and the jaw features well-hidden hinges. He’ll do most poses anybody wants. The only challenge of the “flasher” pose is his hands don’t hold the coat very well. But it spreads to create enough of an illusion. Like the one which comes with TMNT’s Undercover Raphael, but bigger, it’s soft and has more of an emphasis on the interior lining, since that’s designed to be seen. 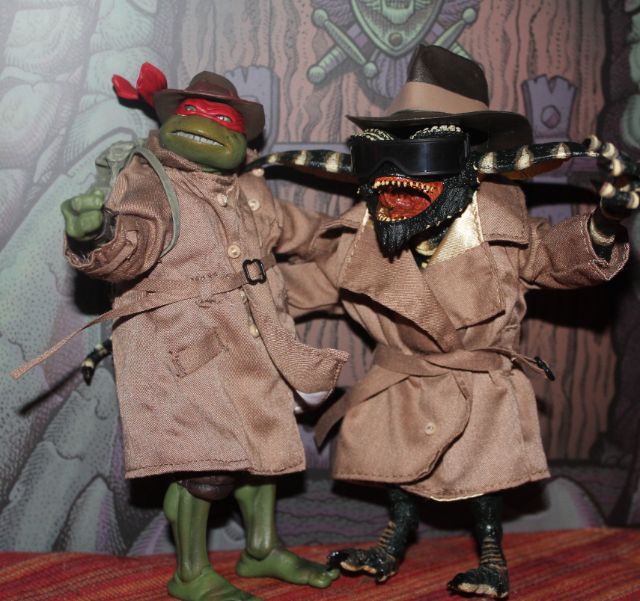 The hat fits well once pushed down a bit, as do the sunglasses. The poker visor is a bit tougher, since it’s not shaped much like his head nor designed to wrap over the ears. So it’s a lot of balancing, really. To get the bow tie on, pop off his head, which is easy, and is on a true ball joint rather than the straight peg recent NECA heads use.

Alternate hands include one to hold the mallet, and the puppet, which is a hard sculpt and fits on the wrist peg rather than a hand. Four individual ashy cigarettes come in the package, but without the aid of glue he can only really smoke two at a time. (Since these small cigs look easy to lose, perhaps they’re just meant as back-ups.) It may seem notable that the glass of beer is super-small, when one thinks about it. Didn’t they drink out of the regular bar glasses? Upon research, stills from the movie reveal that in fact, some of them did have Gremlin-sized beers. It’s a measure of how well the movie works that nobody thinks too much about that…or where they found all those doll/kid-sized clothes to wear. The poker chips and cards seem reasonably human-scaled, and at least one hand does feel specially made for the cards. 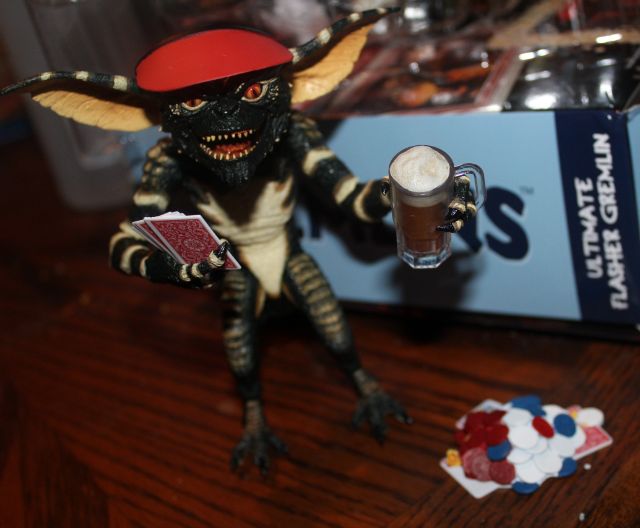 All in all, the figure includes enough for two-and-a-half different looking Gremlins, not including the basic nude one. For collectors just looking for one, this will easily fit the bill. For those who need an army, two of these should add some nice visual diversity to the scratching, scheming horde. 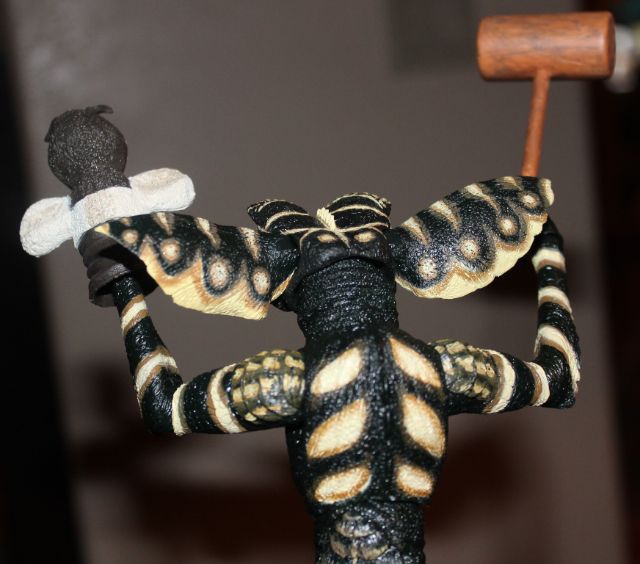 Take a look at more images of the Gremlins ultimate flasher in our full gallery below. Then tell us who your favorite Gremlin is in comments.

NECA loves a body that can be reused.
Geek Culture 3 weeks ago

Between a dragon and a Fallen, which toy wins?
Geek Culture 4 weeks ago
Loading Comments...