So who would you say is the best source for casting news on Jon Chu's anticipated (and yet unnamed) action sequel G.I. Joe 2? Variety? The Hollywood Reporter? Deadline?

Nope, nope, nope… it turns out that superstar Dwayne "The Rock" Johnson has been the one to break most of the casting news for the movie currently shooting in New Orleans as he's been tweeting up a storm during his downtime.

After confirming recently that actor Bruce Willis had a role in the movie, Johnson now reports that comedian DeRay Davis, last seen in Jumping the Broom,  is also joining the cast in an undisclosed role, saying:

On set now. We're all waiting for ONE actor: @DeRayDavis. Very late. Time to get ya ass whupped son..

He even shared a picture of the two of them arm-wrestling (below), possibly hinting that Davis may be on the Cobra side of things? Maybe not, but we certainly will be interested to see who he'll be playing. Any guesses?

So far, the eclectic cast has added RZA, Adrianne Palicki, Ray Stevenson, Walton Goggins and others and they're working hard to make their June 29, 2012 release date. 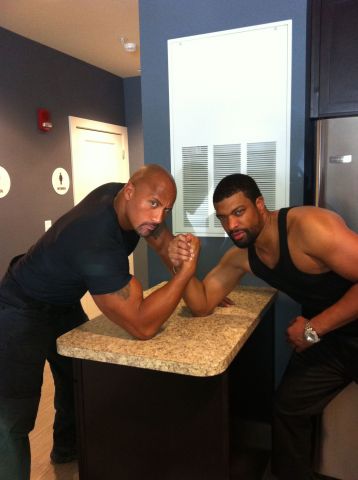