For decades now, Playmates has owned the Teenage Mutant Ninja Turtles toy license, and made just about every variation on the theme imaginable. But Stranger Things are happening this year, as the sewer dwellers meet Hawkins residents in a series of action figures dubbed Upside Down Remix. Raphael tangles with the equally cool-but-rude Jim Hopper, while Eleven pits her powers against Leonardo’s leadership. 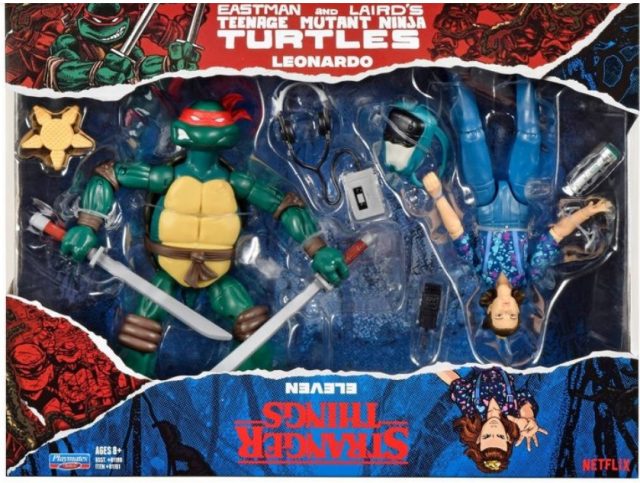 The Stranger Things figures sport their season 3 summer fashions, perfect for mall hangouts. The Turtles, in their Mirage Comics style, don’t appear a visual match at all, save one thing — this is how they looked in the ’80s. Keeping the theme alive, Leo and Raph include Walkmen and waffle throwing stars. Per official press release, “Eleven comes with her signature backpack, handheld phone, and flashlight. Hopper comes equipped with a spiked bat, axe, handgun and flashlight.” 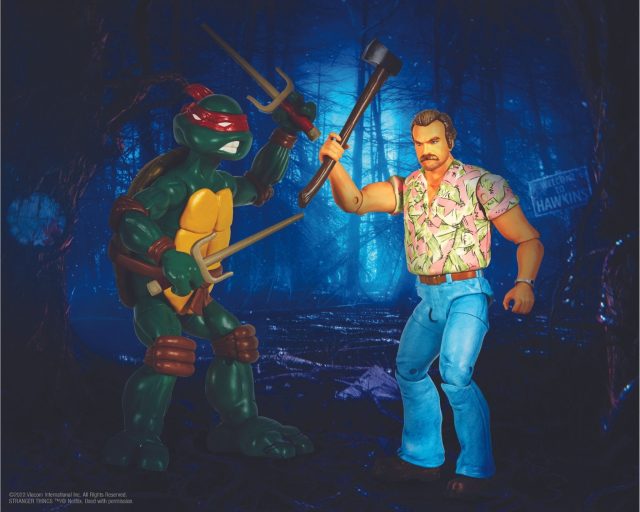 Later, around February, two more sets arrive featuring Dustin and Donatello, and Lucas with Michelangelo. The figures are all Target exclusives, and up for preorder now at $39.99 each.

Really, the match ups feel a bit odd considering both properties have a core four characters who ought to have matched up more closely. Eleven and Hopper should have paired with April and Casey figures. But there’s always room for further expansion.

Will you preorder this unusual two-packs? Let us know in comments!