DC Endless Winter feels like a conveniently toyetic comic storyline for McFarlane Toys. It allows the company to make a massive, monstrous, almost Spawn-like villain for a build-a-figure, bakes in variants of Batman and Wonder Woman, gets a leg up on soon-to-be-ubiquitous Black Adam, allows a repaint, and offers an excuse to do a first-ever comics Aquaman, with a beard. For collectors, unless they love the comic, the Batman and Wonder Woman variants might feel inessential, and the Green Lantern an unnecessary duplicate. But when this wave is good, it’s very, very good. 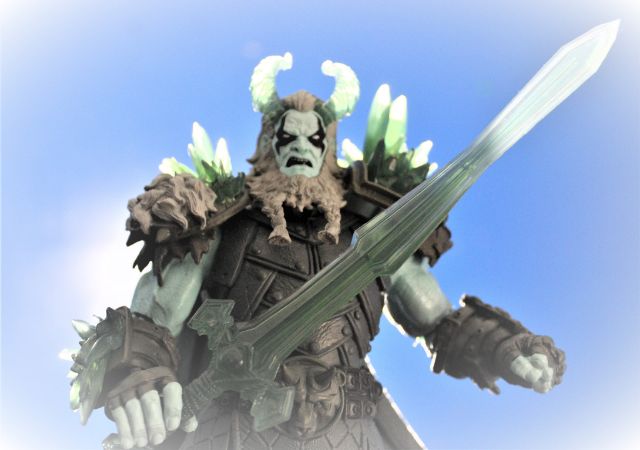 The Frost King, spread across four figures in pieces, clearly makes for the highlight. With asymmetrical spikes like a classically McFarlane monster, translucent ice crystals, jagged cape, and super contoured face, he’s a must for fans of Frost Giants. And should work in any other fantasy line that requires them. Stand him opposite the Witcher, or maybe Thor, and he’ll fit just fine. He’s a comic-styled take on a classic fantasy trope. 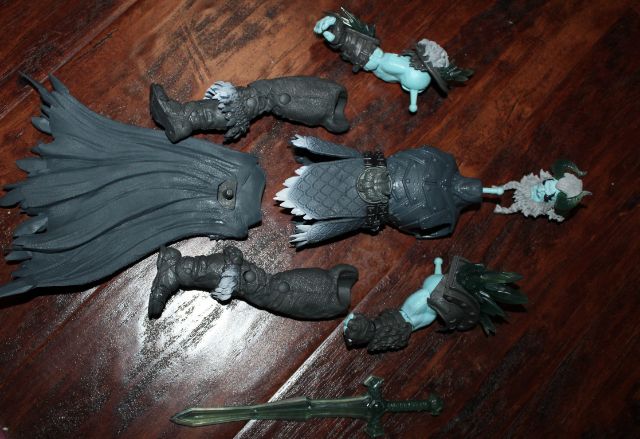 Things to watch for on him: first, the sword. It can get very easily bent out of shape and hold the bent pose. Be ready to heat it up for repositioning as needed. Second, his legs are tough to push in at first, and may fall out during play or posing. But they go right back in. 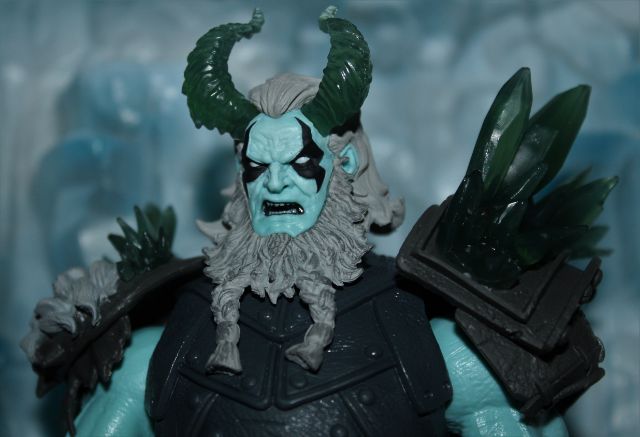 Notable articulation on him is that his elbows sport the standard McFarlane “big fig” swivel and hinge, while his knees contain double hinges. The head’s on a single ball joint rather than a double, but it allows a good amount of movement in spite of his bulky beard. The shoulder pads attach to his shoulder pieces, and sometimes feel endangered by bigger poses, but no calamities yet. And the cape has some flex so it doesn’t inhibit the legs. 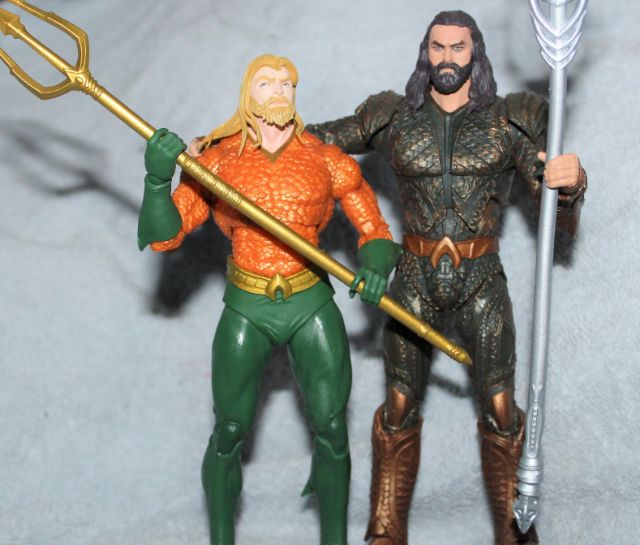 Aquaman makes an unusual addition to this series, as he does not come with a Frost King part, and generally gets sold separately. Also cheaper. His body is classic Aquaman all the way, with a slightly modernized belt logo. His head…not so much. McFarlane’s obviously fonder of the bearded look, but there’s one other thing. A lot of these toys have fallen under criticism from some collectors that they don’t look straight ahead, and “McFarlane figure side-eye” has become a thing. Todd himself promised to fix this in future waves, but before doing that, he really went for it with this Arthur Curry… 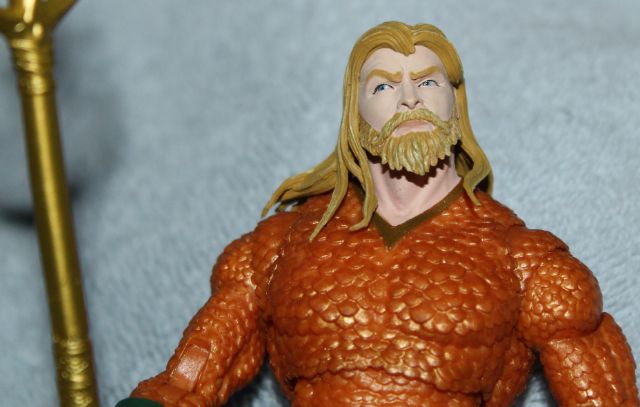 If the head’s a deal-breaker, worry not. Odds heavily favor a reuse of this body with a different portrait somewhere down the line. As for the rest, the pearlescent finish on the orange scales gives it a good underwater look, and until McFarlane makes figures from the first Aquaman movie, the classic trident works well with AquaMomoa. 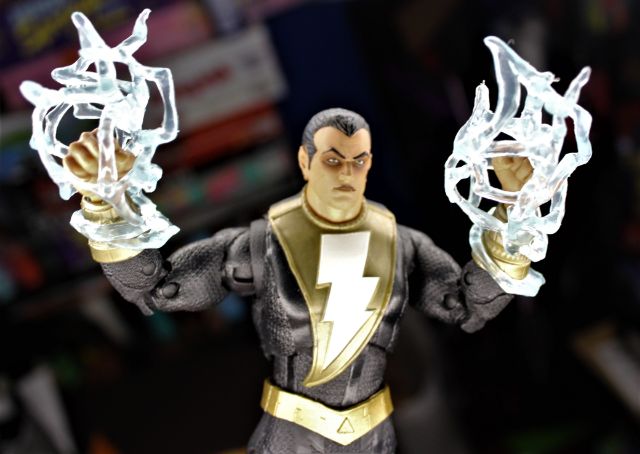 Aquaman may be doing the People’s Eyebrow, but the real influence of Dwayne Johnson likely comes in the form of the comic-based Black Adam figure. Not especially winter-themed, save for a mild bluing of the lightning bolt logo, he comes with energy blasts that attach to his hands. The body will surely see use again, but for a basic Black Adam, this is very well done. And those power effects really catch the light. No cape on this one, though. 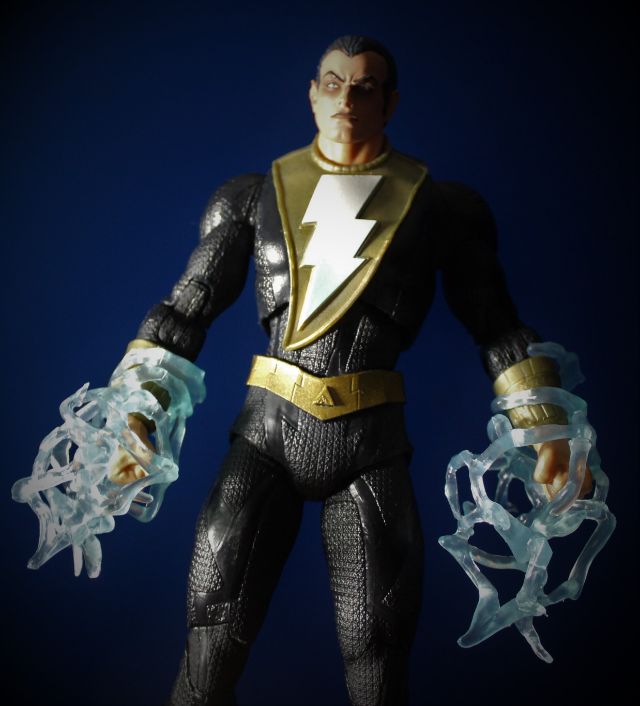 The McFarlane hip joints don’t work so well on Black Adam. An upper thigh cut might seem like sculpt blasphemy, but by design all the build-a-figures have it. So maybe reconsider? The complex interior hips sometimes just don’t swivel. 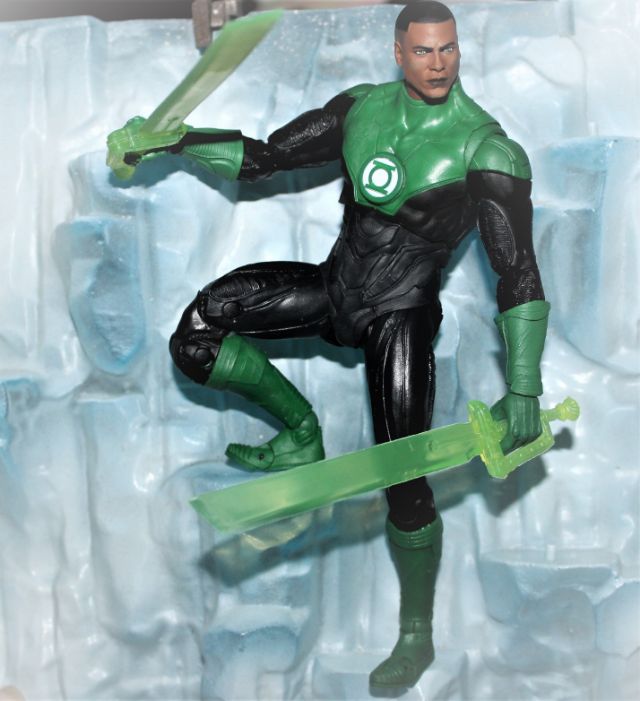 Green Lantern is basically a rerelease of the previous John Stewart, who originally came with a gun and that’s not allowed any more. So now he has two swords, no ring-generated armor, and green hands instead of black. Any snow effects in early press pics didn’t make the final version. The original figure came with better accessories, but this ain’t a bad substitute. 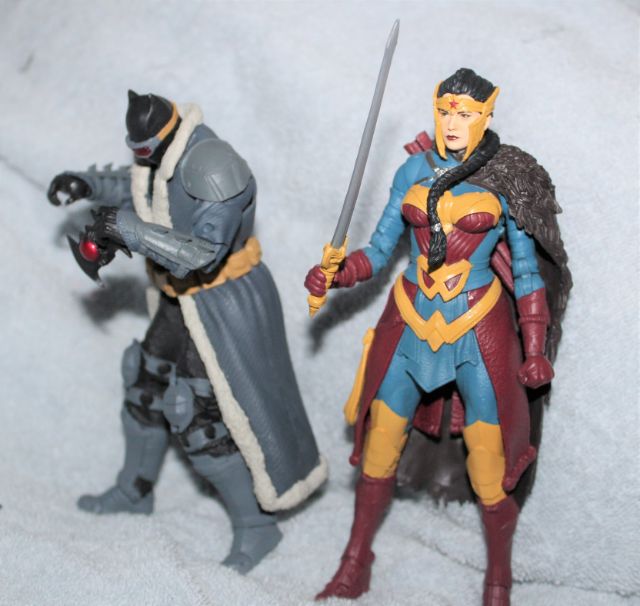 Batman and Wonder Woman come in extremely comic-bookish winter wear. Diana adds the nice added touch of a usable sheath on her back. Batman only comes with some kind of Bat-remote control. Though his white eye-slits do show through the red snow goggles. Diana’s fur cloak and her skirt, and Bruce’s winter coat, feel on the stiff side of flexible, though the coat and skirt slit all the way up the back to allow more room for leg poses. 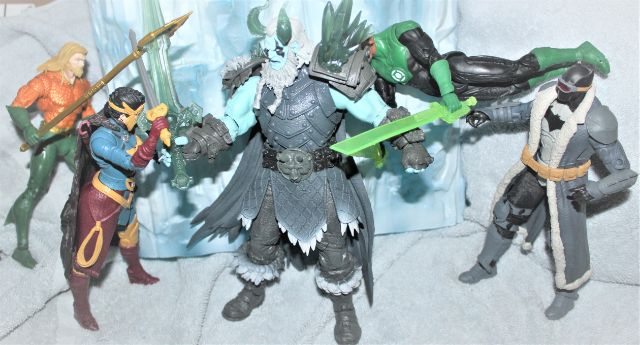 Our partners at Entertainment Earth currently have Aquaman and sets of the Frost King BAF figures in stock, with individuals up for preorder. Aquaman runs $19.99; the rest, $24.99. Those prices remain consistent across most similar retailers. Entertainment Earth is an affiliate partner with Superhero Hype, which may earn fees based on purchases made through links.

The gallery below includes many more images of the Endless Winter figures. Let us know what you think in comments.