Ever since McFarlane Toys started the DC Multiverse line, they have done exclusive two-packs and multipack sets. Often, they’re an excuse to do paint variants. But in the case of several they sent us for review recently, they tend to include both exclusive bases and some resculpting. Not always, of course, which is odd. But it raises the question of who these are for. To the fan who generally collects all the characters but isn’t a completist, some may be extremely redundant. Others vitally important. And in the case of at least one, it’s actually a hell of a deal if found at regular retail price (unlikely as that may seem now). And all of the multipack sets, of course, involve Batman in some form. 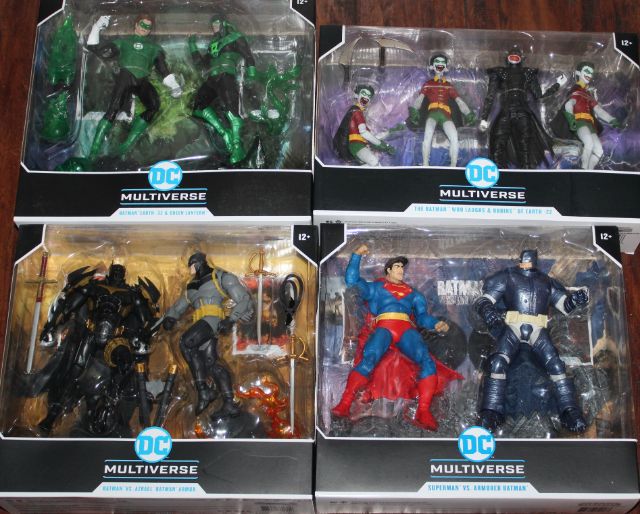 This is by no means every set — we already covered the Flash vs. Red Death in a previous article, and there are others without the exclusive bases. But it includes the most distinct ones sent to us for review. Are they, in fact, worth the extra time and money to track down?

One note: unlike some previous multipack sets, these do not include foil trading cards. Just the regular style cards, with different photos where applicable. (Note: Superhero Hype is part of the Entertainment Earth affiliate network and may earn fees on purchases made through site links. Click most of the headlines below to buy or preorder.) 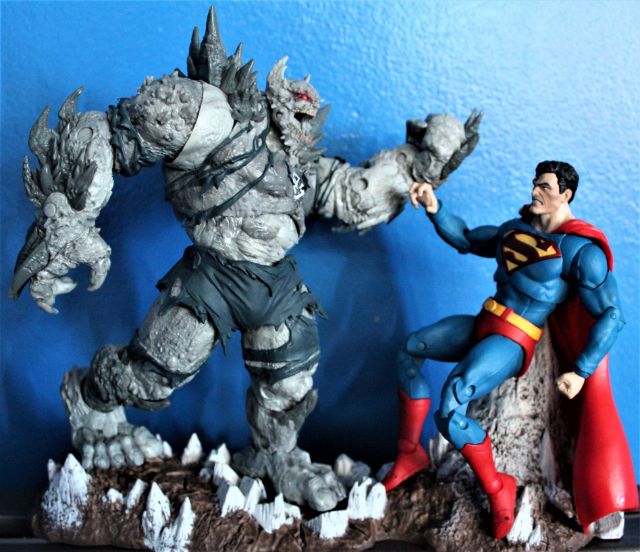 What’s the deal? Basically, Superman vs. Doomsday. Except technically, Doomsday is Batman.

What’s new? Superman has an angry face and a slightly new right hand. Exclusive base with terrain that matches Doomsday skin. Slightly lighter paint scheme on “Batman Earth-1,” a.k.a. the Devastator. No clear improvement or step down here, just a matter of opinion if these versions work better.

Who’s it for? Fans of Superman vs. Doomsday. Superman fans who want an angry-faced version of their favorite character. It’s also an easy way to grab both figures, which are mostly unchanged. 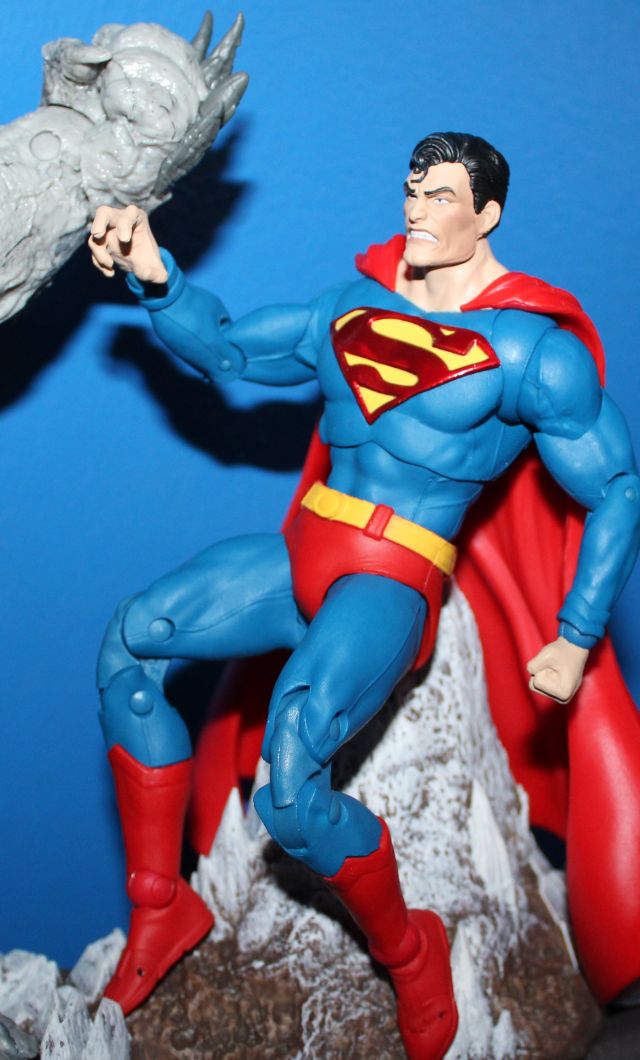 How do they fit on the stand? Not as well as they look. The packaging pose suggests that Superman can be given a flight illusion via a peg on the stalagmite; sadly, that ain’t so. No such peg exists. But you can use the stalagmite to put him in an upright “reeling” pose. Devastator gets one foot peg, placed to create a stomping effect. But leave him on that peg for some time, and he will probably fall over.

Recommend? If you really want or don’t mind angry-face on Superman, or don’t have either figure yet on its own. 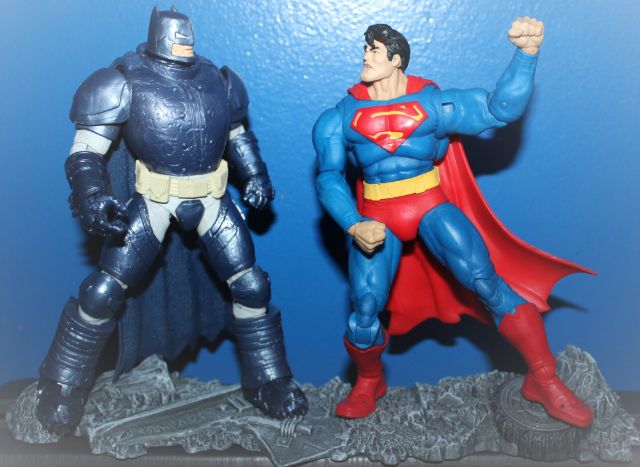 What’s the deal? Zack Snyder’s favorite moment in Batman comics, probably. Armored Batman sets out to fight Superman to the death, from Frank Miller’s seminal miniseries. It’s a bit like Snyder’s movie, but with a much better ending where Batman fakes a heart attack, giving Superman a PR victory.

What’s new? An exclusive street base, and Batman features a bluer paint job. It’s nice and shiny. And even though the armor parts have varying consistencies — the boot cuffs are rubbery, the gauntlets hard — they all match. An improvement over the black single-carded version. Superman is the same, minus the extra hands. And unlike Mattel’s versions, which used recycled He-Man bodies, these figures’ sculpts actually look like Frank Miller artwork. 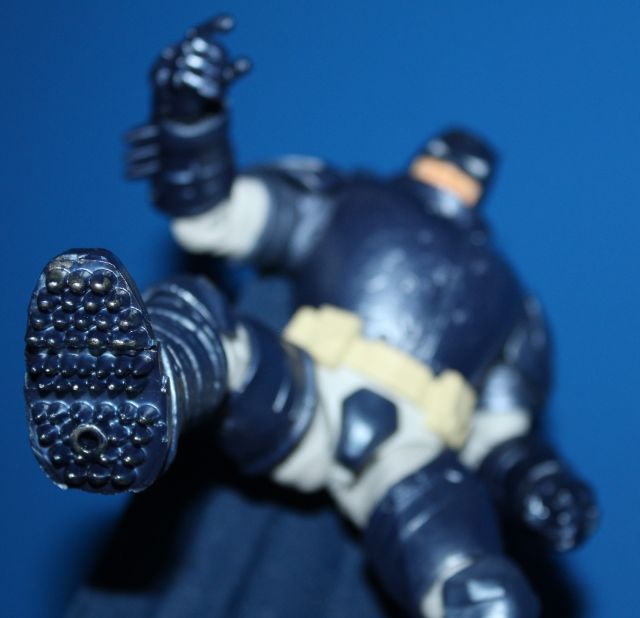 Who’s it for? Casual fans of The Dark Knight Returns, and Snyder bros who aren’t as familiar with the source material. Serious Dark Knight Returns fans will already have picked up this Superman as part of the four-figure Dark Knight Returns wave that comes with pieces to build a horse for Batman. And that Batman can be obtained separately in black. Are there fans of the comic who don’t want the figures of Joker, Robin, or regular Batman? Then have at it. 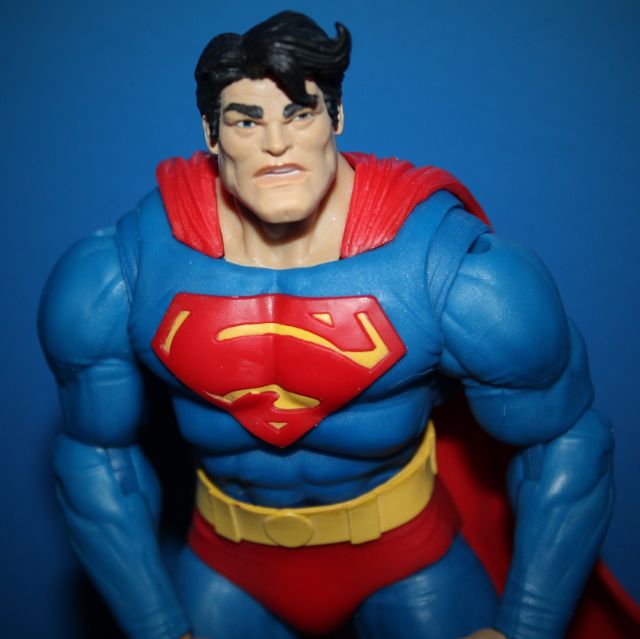 How do they fit on the stand? The best of all the two-fers. Both figures get two pegs apiece on the street base. Batman just takes careful placing due to his spiked soles. And it’s especially notable here, but true of all of them: McFarlane makes these great backdrop inserts, then renders them unusable by gluing the cards and figure stand blisters to them.

Recommend? The blue Batman variant sure is nice. But most fans of this comic will probably buy the other TDKR figures too. Is blue Bats worth paying $20 more for an extra Superman? Your call. 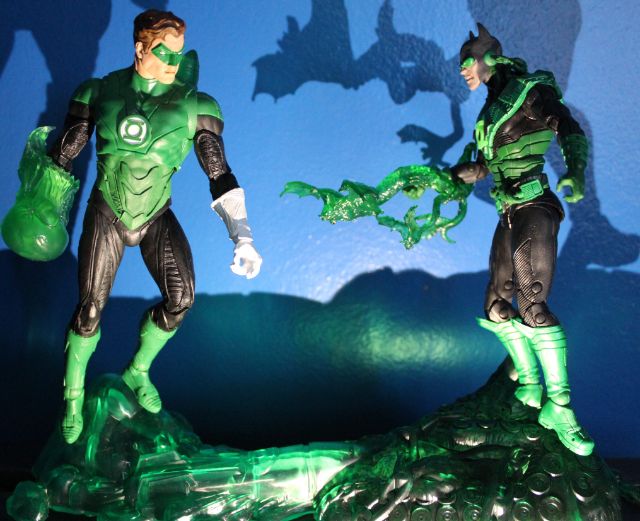 What’s the deal? Batman as an evil Green Lantern, a.k.a Dawnbreaker, takes on the Silver Age version of the GL character. (Light source not included.)

What’s new? An exclusive GL hard light base, and this is the only Hal figure so far. It is, however, mostly a redeco of the John Stewart GL figure, with a new head and accessories. The jetpack easily plugs in his back; the fist energy effect requires popping off his fist to fit properly. Can’t we get one that just fits over the fist? Ah well. [Correction: a few tries later, it worked over the fist. Mea culpa.] 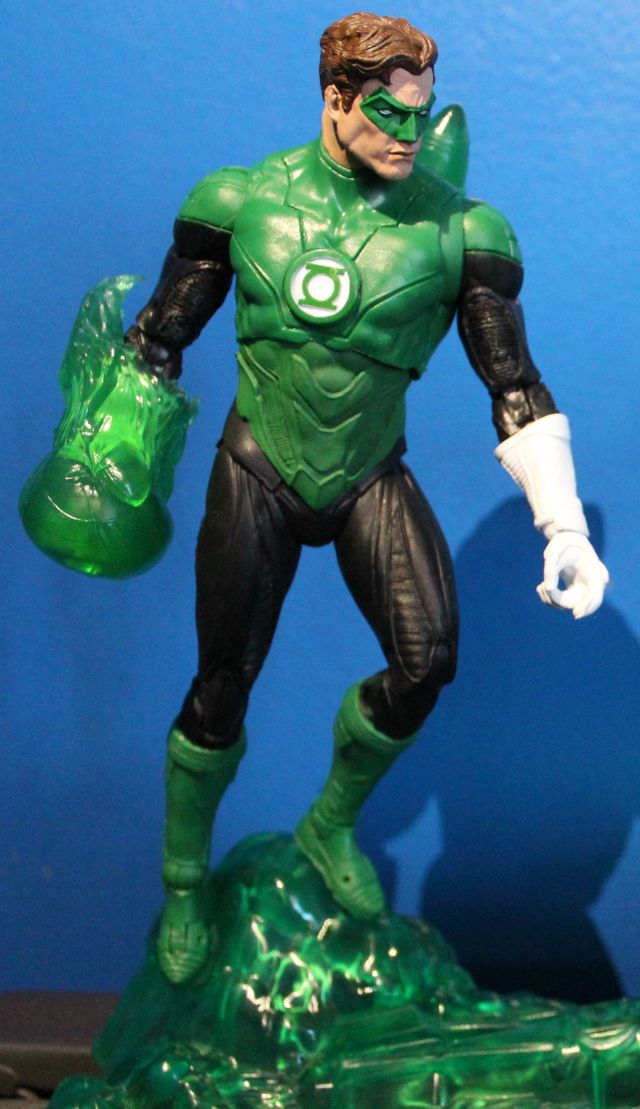 Who’s it for? Anyone who wants a Hal Jordan figure. And here’s hoping you didn’t already buy the exact-same Dawnbreaker. Unfortunately, the Hal in our sample has a super-loose right arm joint, and with all the various bits of shoulder articulation, it’s hard to know how to tighten it up.

How do they fit on the stand? Each gets one footpeg. Dawnbreaker sort-of gets a foot-sized rut for his other foot, but they’re close together. Hal has to put his other foot on a curved surface, and can easily fall. Don’t expect to display them for long like this. 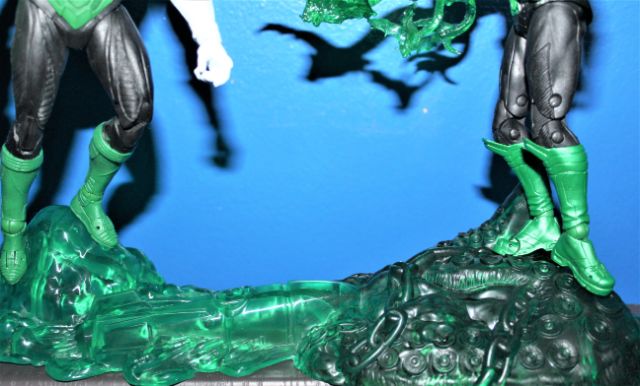 Recommend? The Hal may be mostly a repaint, but he’s a really nice one. It takes a very close look to realize it’s the John Stewart body. Yes, you may have to buy another Dawnbreaker, but, eh…do you really think McFarlane will make another Hal any time soon?

Batman vs. Azrael Batman Armor: Curse of the White Knight 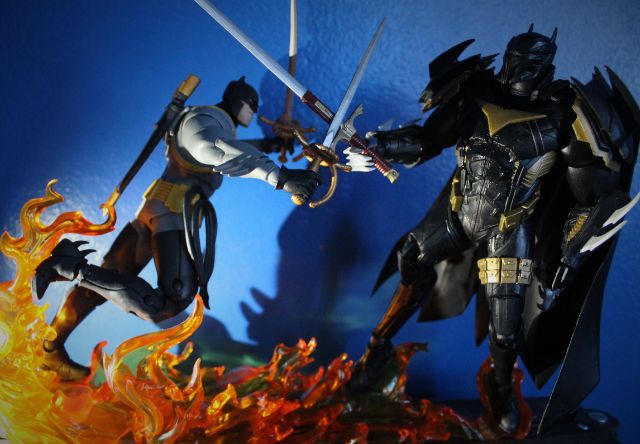 What’s new? Batman comes without the cape, but with two new swords and the scabbards strapped to his back. Exclusive flames base. Az-Bats is exactly the same. Cool figure, though. 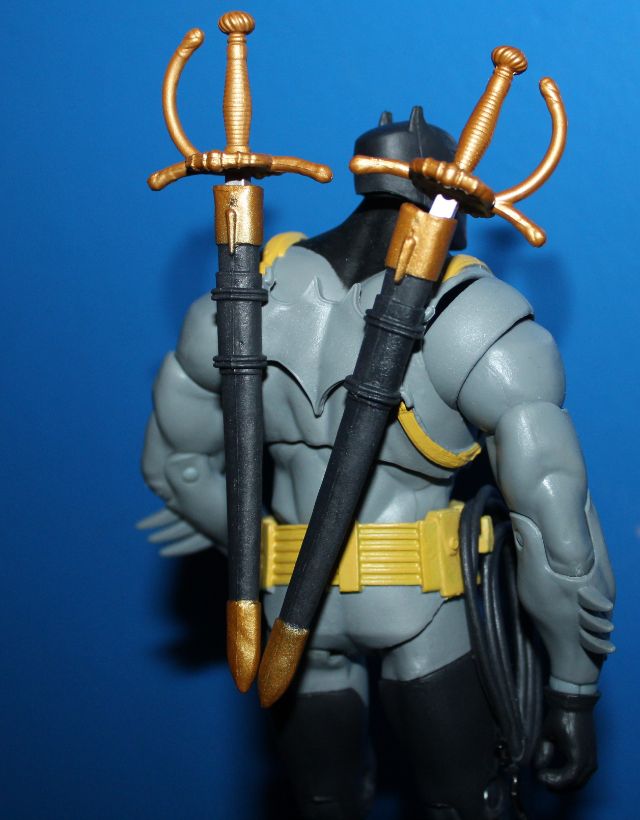 Who’s it for? Fans of stylized, comic-based art in general. And White Knight in particular.

How do they fit on the stand? The fit is great. However, the stand easily splits into three pieces and might be worth gluing. Even so, it’s narrow, and needs the figures on it to pose in a  nicely balanced manner. Unlikely to stay upright forever on the shelf, but the way it allows Batman to pose mid-dive is exceptionally cool. 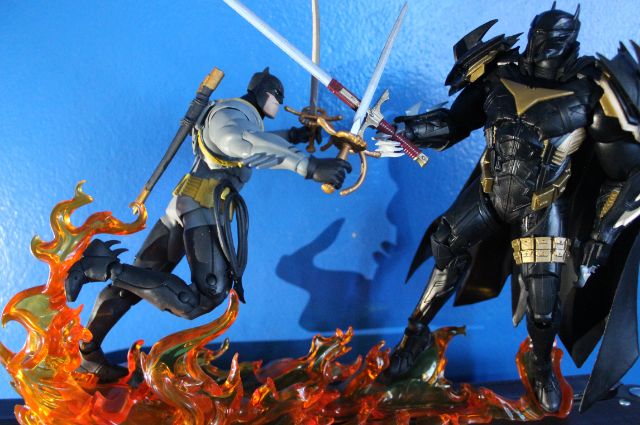 Recommend? The White Knight figure style remains a matter of taste. If it’s to yours, grab it. The Azrael figure is worthy enough by itself that someone will probably pay you for the extra, if indeed you already own one.

The Batman Who Laughs and Robins of Earth-22 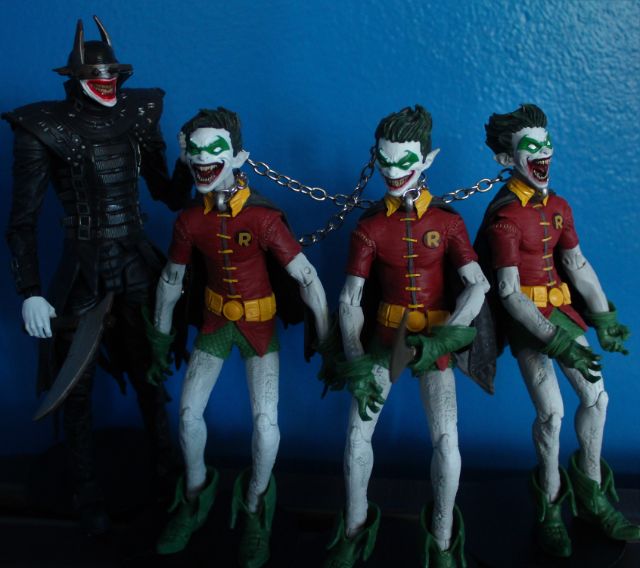 What’s the deal? DC’s most popular new Bat-villain, essentially Batman as the Joker in Hellraiser gear, makes explicit the dom/sub subtext that certain fans have always read into Batman and Robin.

What’s new: Technically, nothing. This is a straight repack, minus the build-a-figure pieces these originally came with. However, that makes it an exceptionally good deal, since they originally went for $25 apiece with those pieces. And if you can find this multipack at Walmart, it’s only $40. 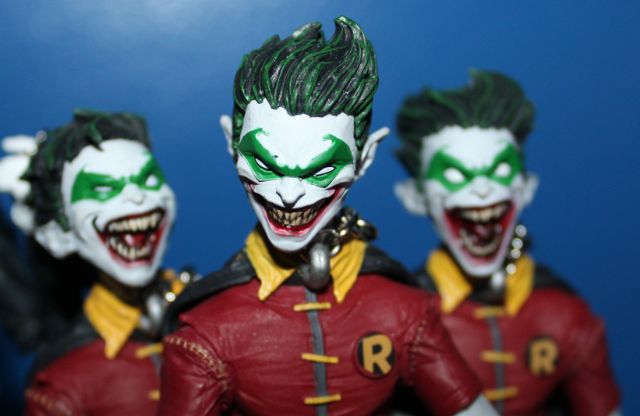 Another factor: the three Robin head variants were effectively sold blind online, without anyone knowing which one would arrive in the mail. This makes for an easy way to get all three, and since Batman Who Laughs is usually depicted with multiples, fans will want to. However, Batman Who Laughs did arrive in the very first McFarlane DC assortment, while the overall scale was still being worked out. So he’s a little small compared to the Robins, while the Thanagarian version that came later looks more proportioned. 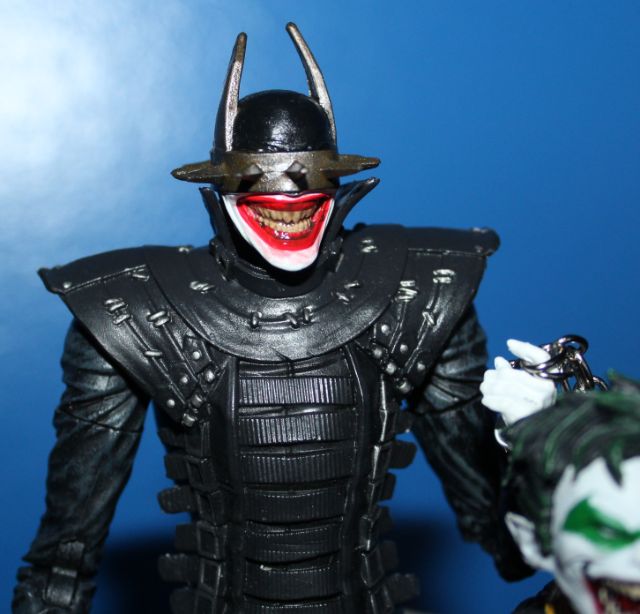 Who’s it for? Fans who want all three Robin head variants. If you only got one before, the other two would have run you $50 anyway because of the build-a-part surcharge. So even if two of these four seem redundant, it’s still value for money. Unfortunately, every scalper knows that and it’s gotten a bit hard to find.

How do they fit on the stand? They only come with the regular figure stands –as do all of these — so, fine.

Recommend? Unequivocally yes. BWL was the highlight of wave one, and it’s good to get another shot at him with his li’l army.

But have nail clippers at the ready. Like all these multipack sets, it features insane amounts of plastic shirt-tags holding the figures in place. Never thought I’d miss tie-wires, but at least those could be dealt with freehand if necessary…

Which set would you pick? Let us know in comments below. And check out many, many more images in our gallery.

The Bat and the Cat -- in different universes.
Geek Culture 3 months ago
Loading Comments...