Now this is the way to do a repaint. When NECA initially made action figures based on the Alien vs. Predator arcade game creature designs, they painted them in cel-shading style to resemble the actual game screen. The initial release — at least on the Alien side — sold out fast. So now the three game-created xenomorphs are on the way back. This time, though, they come in darker, more washed out colors, covered with a shiny, wet-look finish. The idea being, what if these versions actually appeared in a movie? How would “realistic” versions look?

The Predators for the game didn’t sport as drastic a redesign, and the human two-pack is probably still in stock most places. So maybe don’t hold any breath for realistic takes on them. 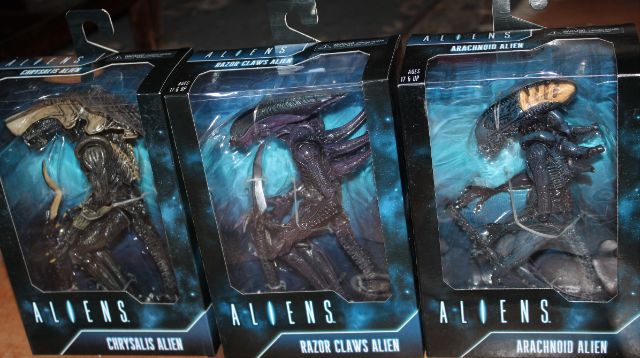 Even the packaging imagines them having appeared in Aliens, just in case customers think their minds are playing tricks. Wonder why nobody saw a Chrysalis Alien, Razor Claws Alien, or Arachnoid Alien in James Cameron’s movie? Because that only happened in some alternate universe from NECA’s imagination. And maybe yours as well.

The figures come in window-box packaging, simpler than the company’s Ultimates. But if anyone thinks that means the price goes lower, think again. All three can be had as a set at various websites, with Entertainment Earth’s $119.99 close to the average. (Superhero Hype has an affiliate partnership with Entertainment Earth, and may earn fees based on purchases through site links.) That’s $40 per figure, which, at this point, is becoming standard for NECA. Buyers can either accept it or not; it obviously goes down easier for buyers who didn’t get the figures before. Should Super7 ever score the rights to make exact replicas of the ’90s Kenner toys in 7-inch scale, we know they’ll be $55. 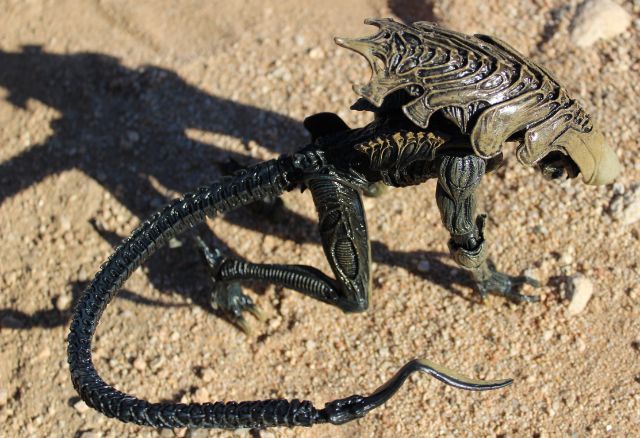 The packaging utilizes a multitude of plastic shirt-ties, which probably cost less than twist-tie wires. As much as many collectors used to complain about those, the plus side was they could be undone by hand, by anyone. These, one can pull out, but it takes strength and induces snap-back. Use nailclippers or scissors. Because of the way the ties hold in the tails, Chrysalis and Razor Claws get their tail tips warped. Hot water might come in handy to reshape them. 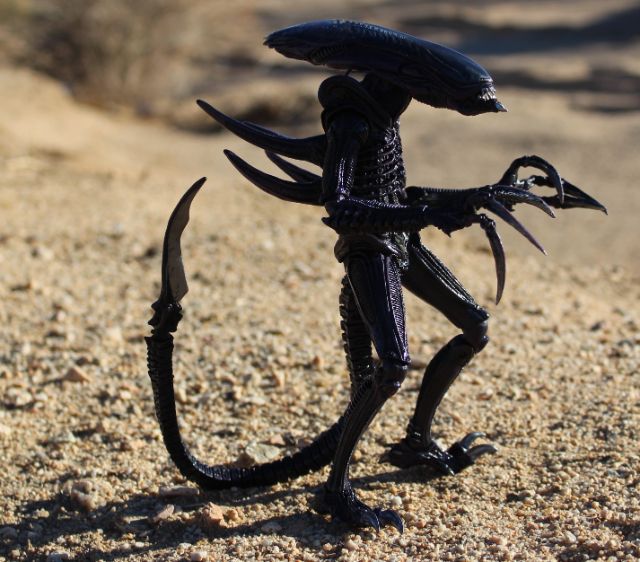 And actually, at least on our samples sent by NECA, many of the joints feel tight enough to scare. Freezers or hot water might prove useful in trying to create that perfect pose, or play harder with them. They are marked for ages 17 and up on the packages, but we all know that’s mainly so clueless parents who shop at Walmart and Target don’t sue. Most buyers of collectible action figures these days already check that over-17 box anyway. 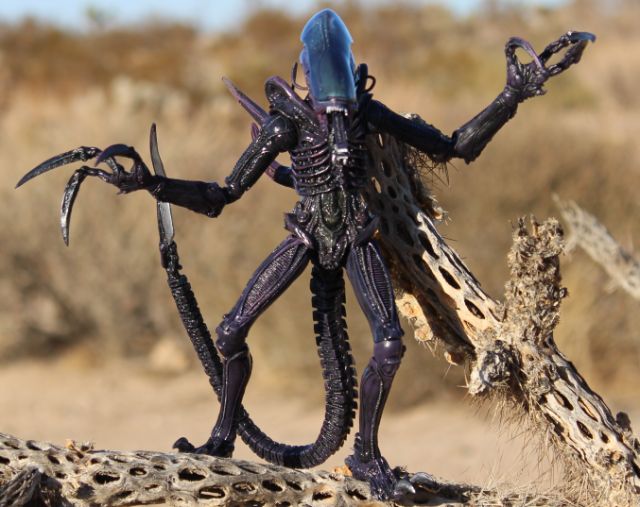 While muted, the basic color schemes on these xenomorphs remains the same. Razor Claws gets purple highlights, Arachnoid’s basically blue, and Chrysalis features tan highlights. Each also uses different base body parts. Without having every NECA Alien to hand, it’s tough to determine which figure gets which. Razor Claws appears to use classic “Big Chap” body parts, Chrysalis seems similar to the Gorilla, and Arachnoid uses the Dog Alien body, albeit not its more canine hind legs. 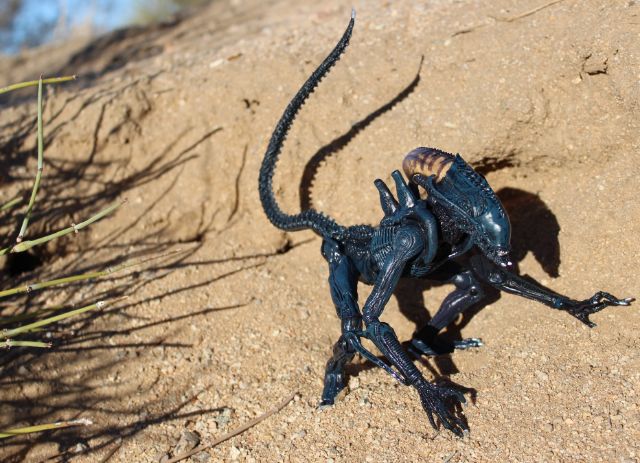 There’s nothing especially “arachnoid” about the Arachnoid. It still has four limbs and essentially mammalian body shape. But it can go on all fours or stand up straight.

If xenomorphs take on the characteristics of their hosts, Razor Claws must have incubated inside Freddy Krueger. Or whatever the packaging bio says about how bone deposits meant to harden the carapace for a Chrysalis Alien went into the fingernails instead, blah blah blah. Create your own headcanon. It just looks cool. 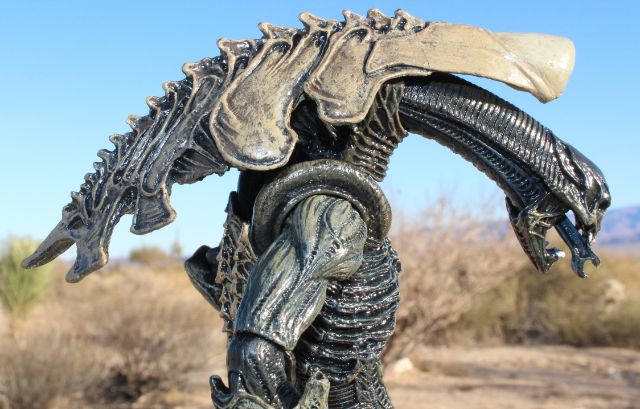 Chrysalis has a mini-action feature. In addition to its inner jaws popping out when the hinge lower teeth open — a feature on every NECA alien — it has an inner head that pops out too. Like the Alien Resurrection Newborn, it has a face that gives it a weirdly human vibe under all that. 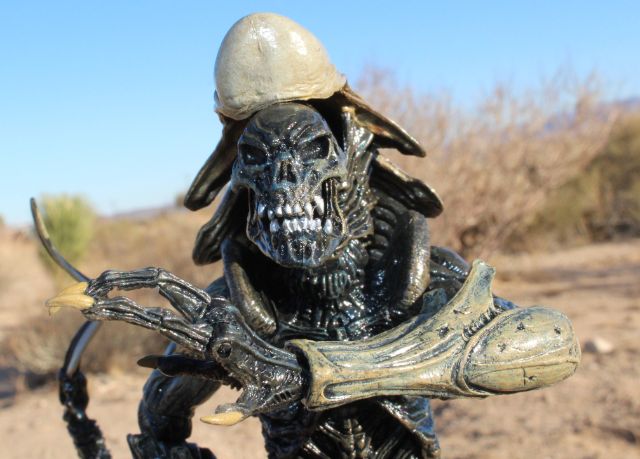 Hide it if you prefer. It can tuck behind the carapace. 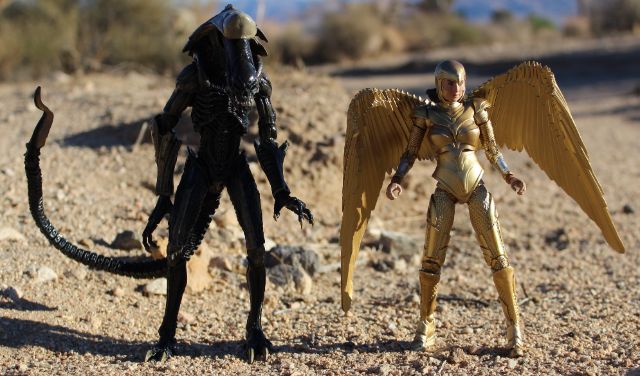 As with other xenomorphs from NECA, we’re talking 7-inch scale. Wonder Woman just happened to be close at hand for comparison. Though, again, they run twice the price that she does. NECA figures made the leap from $20 to nearly $40 shockingly quickly, but with Hasbro now charging $31.99 for a 6-inch Boba Fett figure, get used to the new norm. How McFarlane still gets away with $19.99 DC figures remains a mystery, but don’t expect it to last. We’re in an ironic mid-hike phase where repaints of figures you already own cost more than the originals. The most likely result is fewer completist collectors, leading to fewer obscure characters. Except in lines like TMNT, where the fanbase consistently prove they’ll buy everything. At any price. 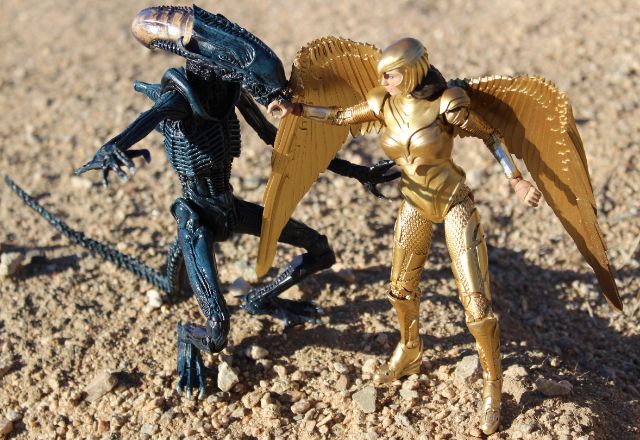 As previously mentioned, some points of articulation on these seem so stiff that forcing may not work. On Razor Claws, some conversely feel looser. but the basic rundown on all of them is this: ball neck (more range on Arachnoid, for the dual postures). Ball shoulders and hips. Mid-torso ball. Double ball and hinge elbows. Single ball and double hinge knees. Bendy tail. Disc and pin wrists. Hinge and rocker ankles. Mid-foot and mid-hand hinges. Hinge jaw with pull-out inner jaw. They can get into most any pose you’d need.

At the $40 tag, one would hope for a few more accessories, since these are repaints. But realistically, what would they be — more facehugger and egg repaints? The economics aside, these are top of the line Alien figures, caught in an upward trend. And seemingly limited, so that price will only go up. If you even think you want them, suck it up and preorder now.

Take a look through the gallery below for many more images.

Between a dragon and a Fallen, which toy wins?
Geek Culture 3 weeks ago