For better and sometimes worse, Frank Miller’s The Dark Knight Returns remains one of the definitive Batman stories of all time. Without it, nobody would even call the character the Dark Knight. The Christopher Nolan movies would certainly change considerably, and the Ben Affleck/Zack Snyder version likely wouldn’t exist. Heck, even the Tim Burton one might not have happened, as Miller redefined the character in the public eye as scary and angry first. And while the title originally skewed towards mature readers, it has seen numerous companies make action figures over the years. Dark Knight Returns figures have come from collector-focused companies like Mezco and Mafex, and the mass retail of Mattel.

Splitting the difference, McFarlane Toys‘ latest take on the property includes mass-retail quality playable toys with collector-skewing sculpts. The company already debuted an armored Batman figure, but now adds a wave of four. Collect them all and build the horse that Batman rides in the book’s climax. And that’s a figure first for any toy take on the story. 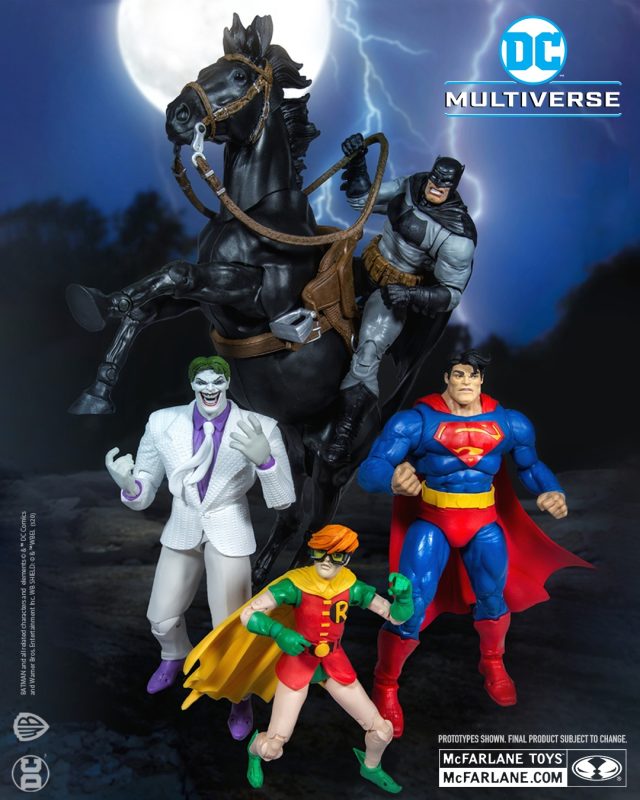 The series includes Batman, Superman, Joker, and Robin. Pricing and preorder information is currently unavailable, but should get announced later in the month. Barring an overall price raise, $24.99 each should sound about right.

Considering the last mass-retail TDKR figures from Mattel reused Masters of the Universe classics bodies, these seem like a step up. But what do you think? Let us know in comments.