Once upon a time, both Captain Jack Sparrow and The Crow fell under the larger Disney umbrella. That’s no longer the case: Dimension/Miramax catalogue titles went to Paramount. But Diamond Select‘s figures of both are now seeing release concurrently, in a new packaging style and format for the company. Diamond has recently knocked out several great Disney figures, following their success with Kingdom Hearts. The company subsequently let them do The Black Hole and The Rocketeer. Pirates of the Caribbean feels a no-brainer after that: whatever some folks think of Johnny Depp, he still has a significant fan base. The NECA figures from previous movies are not easy to find, and this one specifically derives from the fifth film, which never got action figures. The Crow, meanwhile, seems on a renewed marketing blitz, after a lull that was probably due to Miramax rights being in flux. 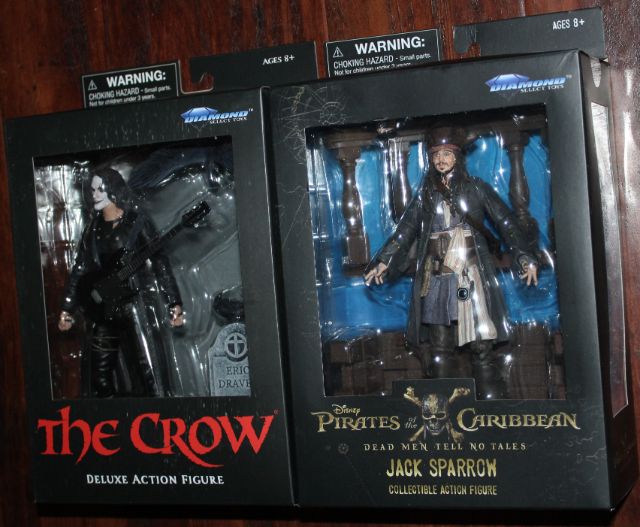 The new Diamond Select figures come in smaller, boxier packaging than the massive blister cards of the past. These more closely resemble the no-frills, minimal accessory variant packages for Walgreens, except they do come loaded with extras. Better than that, aside from some pieces of tape, they’re reusable. The figure and accessories come in a form fitting plastic “sandwich” that holds everything in place with shaped cavities, and zero wires or ties. 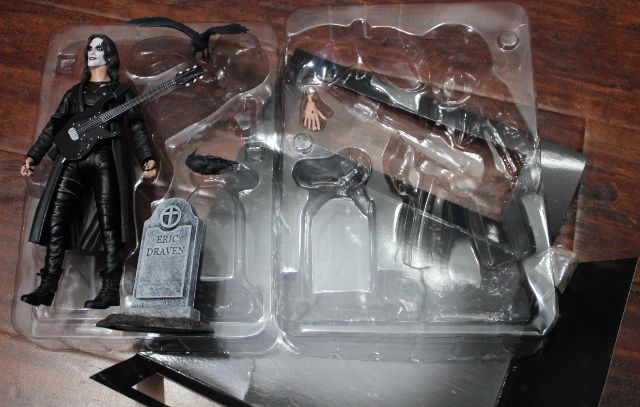 The price point, incidentally, is still $24.99, though it’s going to go up to $29.99 for the Lord of the Rings waves. But the package can be saved after opening now.

Early images of The Crow figure drew derision from some fans, but they may just have photographed poorly. In-person, in-hand, it’s one of Diamond’s better likenesses. The issue the company sometimes has, in common with McFarlane Toys, is that a layer of paint, however thin, over the sculpt, throws of the likeness. The best digital faceprints — think Mattel WWE and Hasbro Star Wars — work on flesh-colored plastic. But The Crow is a character who wears face paint anyway, so that layer of paint actually doesn’t throw things off as much. And the style even shows a bit of flesh color through, like it’s applied paint, rather than the flat white that previous versions did. 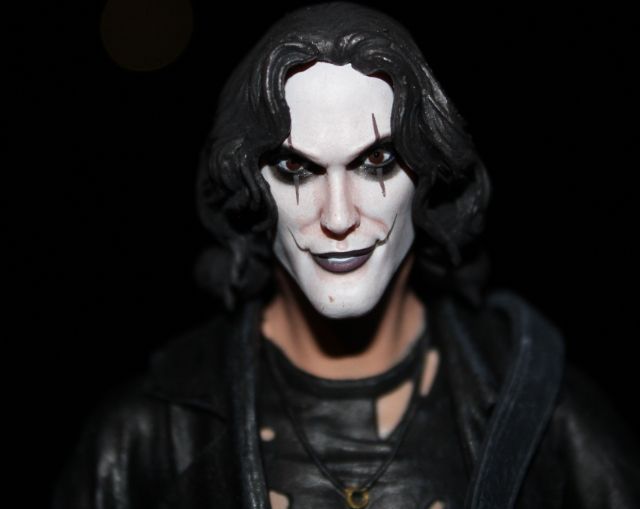 Note also the wedding ring around his neck as a sculpted detail. Prior versions making it on a physical string looked cool, but it could get in the way. Since Diamond also doesn’t do soft goods, the coat’s a sculpt, with perhaps an un-coated version like on the movie poster coming later. But nonetheless, this makes for the most articulated Crow figure so far. At least until Mezco’s One:12 version comes out next year. 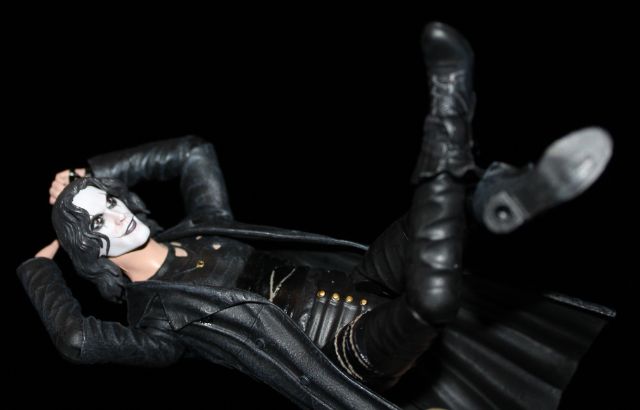 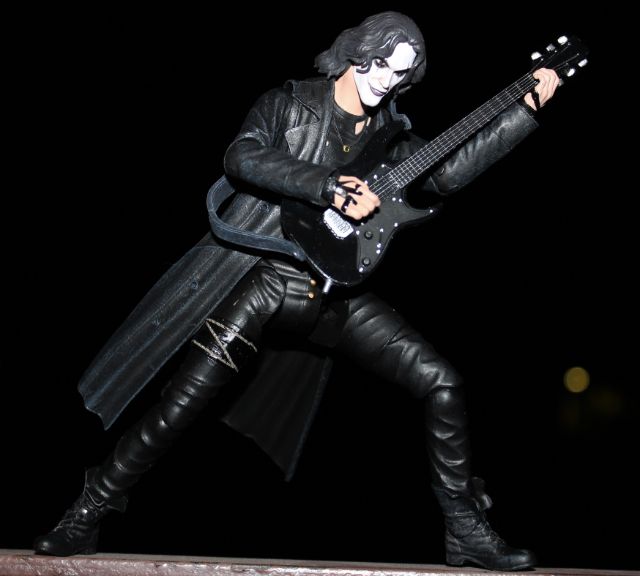 RELATED: Toy Review: Back to the Future Ultimates Wave 1 by NECA

Jack is slightly different, in that he has double-hinge knees instead of disc-and-pin ball joints. His lower skirt restricts leg movement a bit, but has slits up the side to allow for more movement than may seem apparent.

The Crow’s accessories include a tombstone, with two holes on the top to allow one of two crows to perch there. He includes a sedentary crow, and one with wings spread. 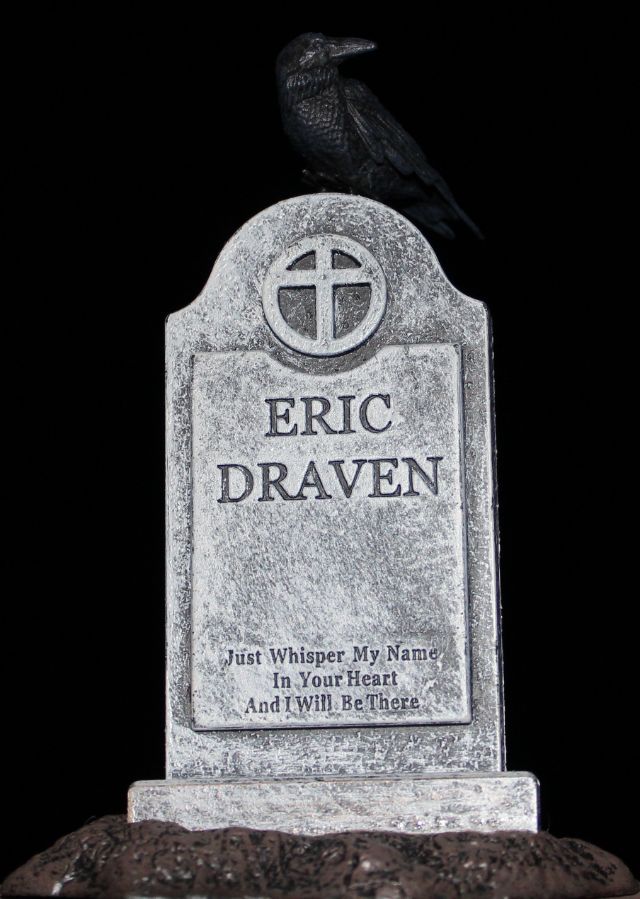 The flying crow also has a hole in its butt, which, to be indelicate, can fit on Eric’s thumb. There’s no obvious way for either bird to peg into his shoulder as one might expect. 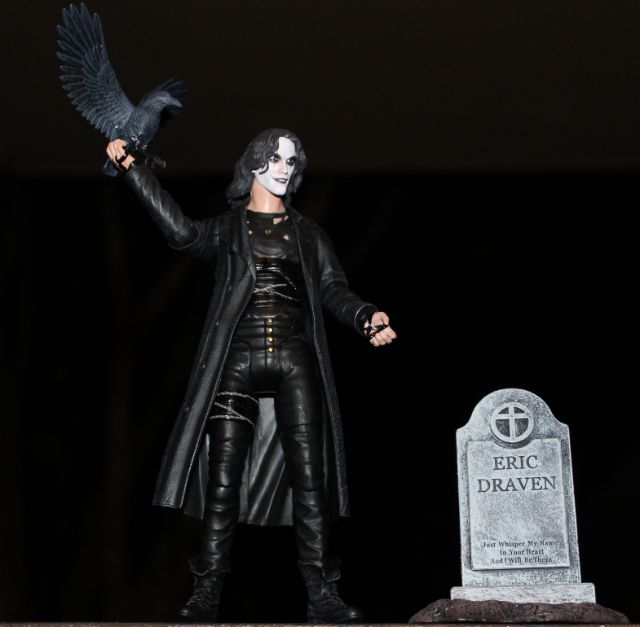 He also comes with a guitar, of course. And one bonus right hand with a bullet hole in it. 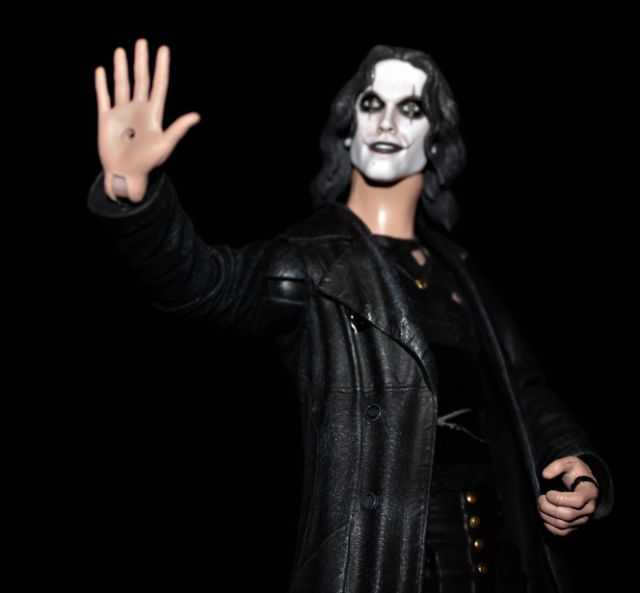 The only issue with the sculpt is that the neck seems peculiarly round and smooth. maybe even a tiny bit wide for the head, though his long hair covers that up. Could be a case of scaling. 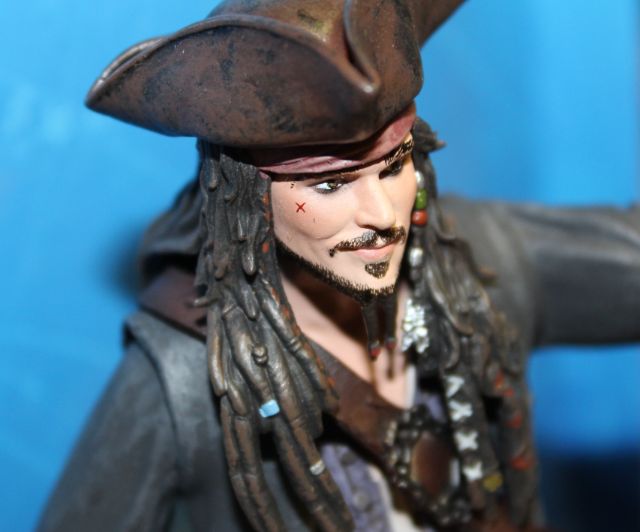 Jack clearly has the face printing, down to a tiny x-shaped cut on his face. But he looks more like Johnny Depp from some angles than others. This could, once again, come about as the result of an extra layer of flesh-colored paint on the sculpt. But Depp’s face is getting weightier IRL lately, so the twain may meet. The tricorner hat absolutely does not come off. 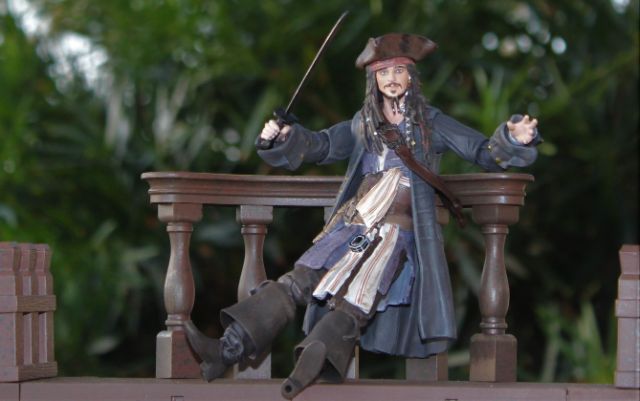 The primary accessory with Jack is a ship deck diorama. It’s surprisingly wide, but in the tradition of the NECA figures which did likewise. It’s also modular, with dovetail joints for potential expansion with future figures.

The diorama sports no foot pegs, but a Diamond figure stand also comes with, the traditional black oval with one peg. It fits Jack well.

Jack’s other accessory is an alternate sword-holding hand, with the sword glued in place. On the one hand, this feels like skipping the middleman — the only point of alternate “holding” hands is to hold weapons. On the other, since he has a sheath that the sword actually fits in, one may want to display him with the sword in there sans extra hand. Fortunately, the sword can come unglued, though this may leave paint smears on both hand and hilt. 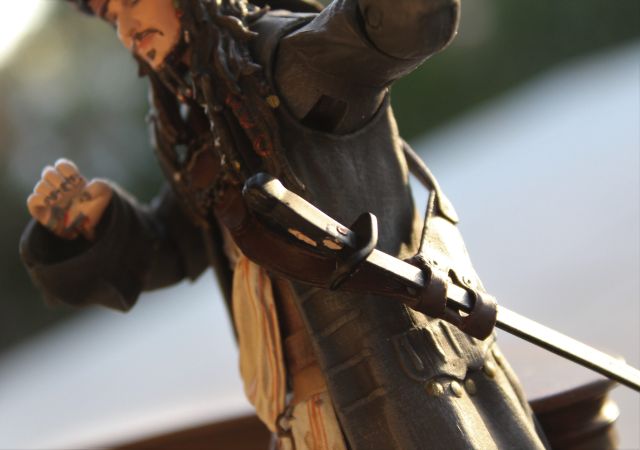 Both Jack and Eric fit the 7-inch scale, and pose well with similar figures from other companies. The deck base may be a godsend for collectors with wireframe shelves. Good diorama bits are tough to come by these days, and Jack is almost worth the money just for that. 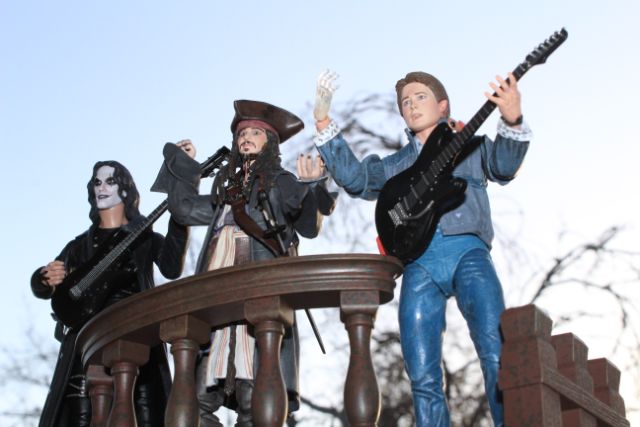 In both cases, fans came to the figures with a bit of “been there, done that” fatigue. But The Crow’s articulation, and Jack’s diorama plus being based on the fifth, un-toy-ed film, make them worthwhile additions to the collection. And it goes without saying if you never had previous versions, these make solid debuts. Where Diamond goes from here with the licenses — if anywhere — should get more interesting still.

Take a look at many more angles and details in our gallery below. Then tell us what you think in comments.

He's a head of the toy shelf.
Geek Culture 3 weeks ago