Terminator: Dark Fate was a good Terminator sequel after at least a couple of duds, but it didn’t matter. The public seems so burned out on Terminator movies that even the return of Linda Hamilton and a rebooted future war storyline couldn’t lure fans back to theaters.

But because Terminator toys usually sell well regardless, NECA got to work on action figures of both Hamilton and Arnold Schwarzenegger in their roles. Two additional figures — presumably Mackenzie Davis’ augmented human Grace and Gabriel Luna’s Rev-9 Terminator — are unlikely to see the light of day. Fandom for the O.G. actors, however, may save these toys from oblivion even among those who don’t care about the film.

Perhaps appropriately, these figures feature a lot of really good execution, but have a couple of nagging issues that keep them from the top tier. As with the movies, a significant issue is that we know top-notch work has been done with this license before. So expectations cannot be low. 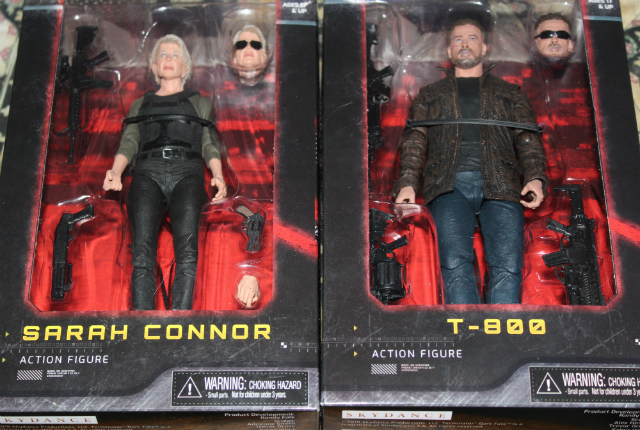 Both figures come packaged in window boxes that mostly look identical save the character name. Paramount presumably wanted the Terminator’s adopted “Carl” name secret, so he’s just labeled T-800. And he basically just looks like present-day Arnold Schwarzenegger in normal clothes. He might be a bit old to still rock the black leather. 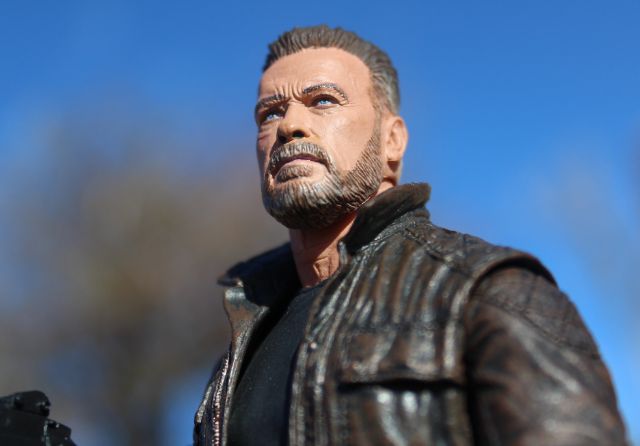 The Schwarzenegger likeness feels a little off, but on reflection I think it’s the paint. The sculpt includes such details as the wrinkles by his eyes and folds in the neck. Meanwhile, however, the paint job has his nostrils black and his eyes looking made up. NECA began to use digital face-printing this year to get photo-real color schemes, but Carl definitely missed it. And needs it.

Sarah, on the other hand, looks like she popped off the poster. Not having painted nostrils or facial hair can get advantageous. Both figures come with alternate sunglassed heads, because removable glasses are fiddly and annoying to the point that extra heads work better. And in both cases, I prefer the sunglasses version, though of course that one is less accurate to movie Carl. 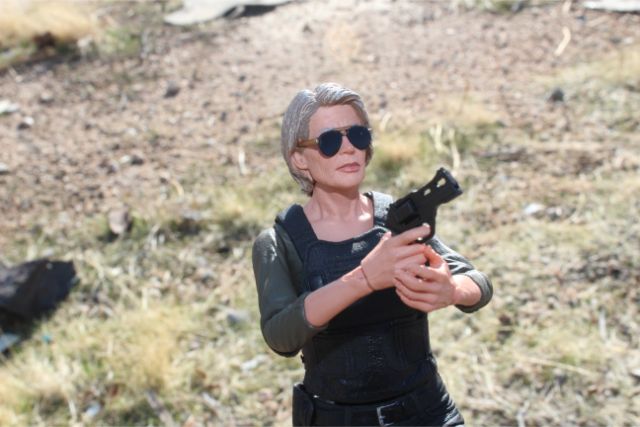 Both characters also come with interchangeable hands, but oddly, no trigger-finger left hands. Sarah only has the one left hand that can’t grip any gun. It can help steady her other weapons, but she can’t carry them all. (The smallest handgun fits in a waist holster.) Carl has alternate left hands, but none with trigger fingers like his rights. So they can either steady the larger weapons, or hold guns lengthwise. The weapons themselves include minor articulation when necessary, like a rotating barrel or fold-out stand.

Articulation varies. Carl has double ball-jointed elbows, while Sarah’s only get single. And Carl’s shirt hides both a waist cut joint and an upper torso ball. Sarah’s waist gets a ball joint, and her upper torso might, but the flack vest is too stiff to tell for sure. Sarah’s ankles are only hinged, while Carl’s have restricted ball movement. 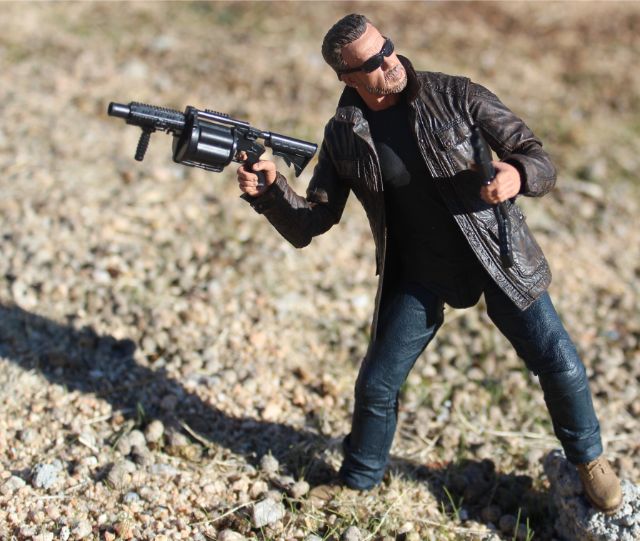 Getting them into realistic poses isn’t hard. Getting them to stand up can take a bit to find the gravitational sweet spot. But once there they can look uncannily human. 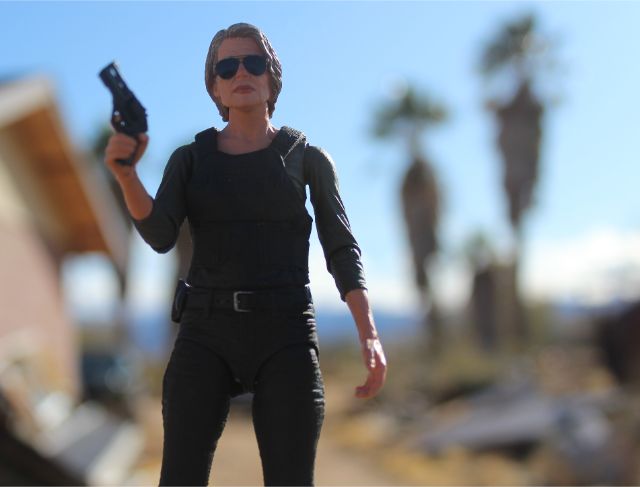 Sarah Connor is definitely a win overall. The toy captures Linda Hamilton’s new look, and gives her a mini-arsenal, though you might want to see her with Carl’s bigger guns. Carl is a bit of a trade-off — he may not have the perfect movie likeness, but he’s the best current-age Arnold toy we’re likely to get. Both retail for around $23.99, which feels about right given that Star Wars 6-inch figures will soon hit $21.49, and these are an inch taller with more weapons.

Check out the gallery below for more images. Then tell us in comments if you’ll be back for more Terminator toys.

Three years after Terminator: Dark Fate hit theaters, James Cameron shares why he thinks the film wasn't as successful as…
Movies 2 months ago

Who ya gonna buy?
Movies 1 year ago