Andor is the first Disney+ live-action Star Wars series to screen in advance for critics outside of special premiere events, which feels significant. Viewers can only assume why. But two possible reasons immediately come to mind after watching the first four episodes. The first is that this show, for once, does not rely on big spoiler cameos. Thus far, you’re not going to see an episode ending with, say, a sudden Admiral Ackbar reveal. The second is that Disney+ might need the press to explain just how different this Star Wars is going to be. Frankly, young kids might get extremely fidgety from Andor‘s bleakness and dialogue-driven drama, with relatively few laser fights. And at least in these initial episodes, no Stormtroopers or lightsabers. Andor review. 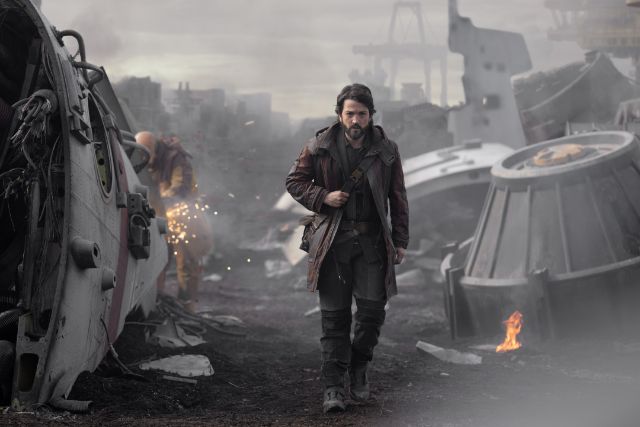 The opening of the first episode feels more like a Blade Runner TV show than Star Wars, with Cassian Andor (Diego Luna) walking the rain-soaked streets of commerce planet Morlana One’s red-light district, passing window-posing hookers of all species. He’s on a mission to find a lost family member, but it goes awry, leaving people dead in his wake. They’re minor players, but their deaths attract the interest of Deputy Inspector Karn (Kyle Soller), who is a bit of an obsessive nerd about such things, despite the disinterest of his superiors.

The year is BBY5 — five years before the Battle of Yavin — and this is the first time a live-action Star Wars has canonized that dating system onscreen. For the characters onscreen, this means little. Internally, they wouldn’t know they’re that far away from the first big Rebel victory seen in Rogue One. For hardcore fans, it’s one of many small references to piece together. There are also shout outs to events on Mimban, Arvala 6, Scarif, and other familiar locales. The bottom line of the timing is that it’s the height of the Empire. This is a period we haven’t seen much of, because frankly, it’s a big downer. 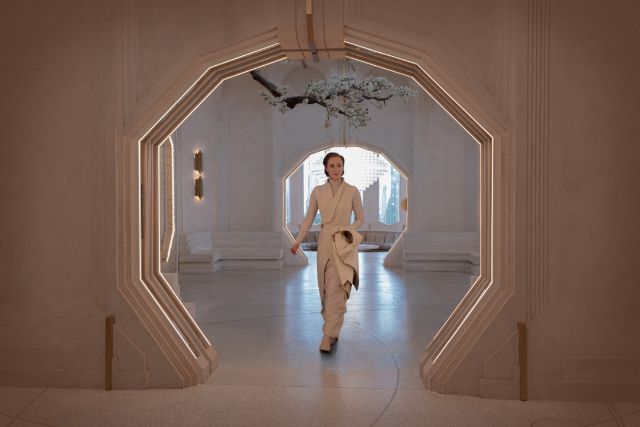 The opening three episodes, which will drop on Disney+ all at once, essentially cover Cassian Andor’s origin. This part of the story largely takes place on the planet Ferrix, which seems a sort of fascist shopping mall/swap meet. That it looks like a really rainy version of Disneyland’s Galaxy’s Edge doesn’t seem like a coincidence, especially when one tourist complains about the price of parking, and the mere notion that he’s being charged money just to come and buy more stuff. To the extent that this show has humor, it’s a very downbeat, deadpan, British style.

In the present day, small-time thief Andor, looking for an escape route from the dead bodies, gets recruited into the larger Rebellion. Meanwhile, in parallel flashbacks, the story of how he left his rainforest-like home world, Kenari, unfolds.

RELATED: Andor Did Not Use The Mandalorian’s StageCraft

The fourth episode is where Mon Mothma comes in, and we make a welcome return to Coruscant, as the narrative diverges. Andor himself, meanwhile, finds himself part of a group of seven on an outpost world planning a heist. Unlike Rogue One, viewers know Cassian will survive because they’ve seen the end of his story. Sadly, this new group proves even more boring than the Rogue One team. One seems to have heightened empathy powers, while the rest seem like interchangeable, shouty humans. The accidental comedy of K-2SO is sorely missed.

More welcome levity comes with the villainous Karn, who is like an evil version of Star Trek: Lower Decks‘ Boimler. Insistent on doing everything by the book even when his superiors tell him to knock it off, Karn finds himself escalating and ending up in awkward situations. His position at the end of the fourth episode makes for a nice bit of absurdity that’s still in-keeping with the show’s somber tone. As the only antagonist, he would be ludicrous. As one of several established villains, Karn is the perfect insufferable office suck-up that all corporations have. Soller plays it utterly straight, as he should.

Karn’s first big scene, a debate with a very David Warner-like superior, boasts some of the best dialogue Star Wars has highlighted in a long time. Andor may have spent big bucks on the sets, but it’s not a show about set-pieces. Conversation, intrigue, and double-crosses drive the plot. It’s not on the same level as Game of Thrones, but it clearly aspires to that.

Adding crucial atmosphere, composer Nicholas Britell (Moonlight, If Beale Street Could Talk) proves a worthy addition to an elite club of John Williams, Michael Giacchino, and Ludwig Goransson. He excels at the task, from the wood instruments that give Andor’s childhood a South American vibe to the sparse beats of robot B2EMO’s first entrance. Recalling Rey’s initial theme in The Force Awakens, the latter theme — like many here — evokes a melancholy and a sense of emptiness at the heart of the run-down, day-to-day life under totalitarianism. “Must everything be boring and sad?” asks one major character’s significant other. Kids used to Jedi battles may ask the same. But for older audiences eager to up the ante on George Lucas’ vague parallels to real-world power struggles, enjoy the catnip.

Rogue One, as beloved as it is in some quarters, was hamstrung by competing visions. It’s tough to pull off something that’s simultaneously a dark war story, a crowd-pleasing adventure, an indulgent bit of fan-service (the Vader scenes), and a truly terrible misjudgment of CG’s powers to resurrect dead actors. Andor, now a vision solely shepherded by Tony Gilroy, and with 24 episodes to play out, is free to focus on being a downbeat spy story. At times it feels like a foreign film, made by someone from another culture within the Star Wars universe. That all the Kenari flashbacks feature un-subtitled non-English adds to that effect.

In assessing the show as a whole, a lot will depend on how things play out. What Disney showed for review could play as an outstanding buildup, or stay low-key and lead nowhere. What is clear for now is that at the very least, Andor is a big swing into a different style of Star Wars show.

Aardmans's take on Star Wars should be interesting.
TV 2 days ago