Anyone who was disappointed in any way by Gareth Edwards’ 2014 Godzilla will be happy to know that Adam Wingard’s Godzilla vs. Kong does almost everything differently. Where Edwards held back his monsters, Wingard never stops showing them. Edwards’ creatures were aloof and mostly inhuman, while Wingard’s Kong scratches his ass. Edwards’ story strived for some kind of consistent scientific plausibility, if not necessarily accuracy. Wingard knows that this movie’s science is stupid and he doesn’t care. Edwards let the viewer feel the horror of a city getting stomped. Wingard’s kaiju seemingly have massive body counts that everyone shrugs off.

To be fair, both approaches are absolutely valid. It all depends on what kind of monster mash-up movie it turns out to be. If we view the Legendary Godzilla movies as a trilogy, excluding Kong: Skull Island, then the middle installment, King of the Monsters, felt like a half-hearted compromise between two extremes. Godzilla and Godzilla vs. Kong are those extremes. This newest, and most likely final entry, feels like cinema as thrill ride. It’s distinguishable from a theme park experience primarily in that chairs at home don’t move by themselves. Substantively, it makes Captain America: The Winter Soldier look like an actual ’70s conspiracy thriller by comparison. But nobody’s coming to see substance. Come for the monster equivalent of Hulk Hogan vs. Andre the Giant; stay for the bizarre Journey to the Center of the Earth shenanigans that happen in between.

RELATED: Director Says There Will Be No Longer Cut of Godzilla vs. Kong

Much has happened since last we saw the two kaiju. Skull Island’s native population got completely wiped out in a freak storm. So it now serves as a guarded research facility, concealing Kong from the world and Godzilla specifically. The latter has been traveling the world making all other monsters humble, and the Monarch organization rightly fears that a nuclear dinosaur could slay their big ape. Meanwhile, the giant reptile has attacked a tech factory, leading everyone to presume he’s gone bad. Because of course humans would assume that the big technology company is morally good, while the literal savior of the world and environment (twice over!) must be evil.

A far-fetched defense plan involves Kong, and the center of the Earth, and the details really don’t matter. The tech company, on the other hand, contains the world’s worst-kept secret movie spoiler since the ending of M. Night Shyamalan’s The Village. What matters is that once Kong leaves his sanctuary, Godzilla feels the need to prove his alpha-ness again. It’s clash of the titans time.

Look, here’s what matters: the fights are great. Sure, the geography of Hong Kong isn’t entirely clear when they battle there, but the sheer reckless destruction makes up for it. The two major battles, one by sea and one in a city, live up to the hype. Even when the script pulls the two apart into separate side missions, they still smash and kill stuff. Meanwhile, the puny humans, among them Millie Bobby Brown, Alexander Skarsgard, and Bryan Tyree Henry, fly around in anti-gravity vehicles with Tron lights. 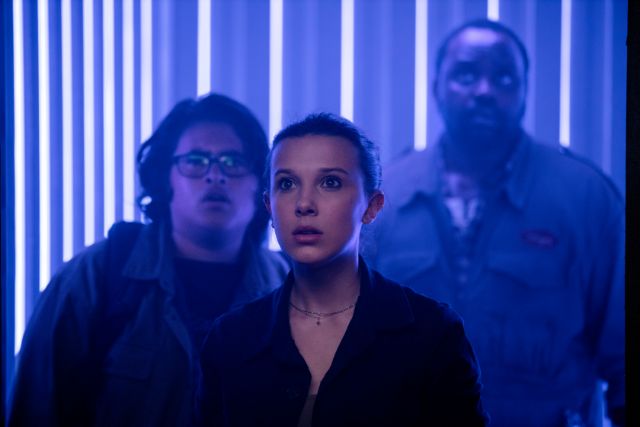 In terms of monster characterization: Godzilla’s basically a dick, and Kong’s kind of a doofus. We first see the latter lounging on his island, yawning, stretching, and scratching like Homer Simpson. Wingard’s also fond of playing ironic songs over his scenes. The urge to sentimentalize Kong remains strong in too many filmmakers who grew up on the TV edit of the 1933 film. Thankfully, once his arch-nemesis enters the picture, the ape becomes all business. Godzilla, meanwhile, acts like the bully on the block, or perhaps the cat who’s just found out that a puppy will be joining the household. Neither depiction is particularly consistent with what these films have shown before, but nobody’s likely to care.

More than two hours of this would be too much. Like an all-you-can-eat dessert, the candy colored visuals can only sustain so long. Kids are likely going to love it, as are parents who can get on their wavelength at least some of the time. As a movie, it’s a great WWE pay-per-view.

Rebecca Hall, Brian Tyree Henry, and Kaylee Hottle are reprising their Godzilla vs. Kong roles in the upcoming sequel, which…
Movies 6 months ago

Disney has drafted Stephany Folsom to write a new live-action King Kong series, with James Wan onboard as an executive…
TV 6 months ago

As part of today's Geeked Week announcements, Netflix has shared the first official photo from its upcoming anime series based…
TV 8 months ago

Dan Stevens Will Star in Legendary’s Godzilla vs. Kong Sequel