Marvel Studios productions have tried to play in the sandbox of different genres since the start of the MCU. The Disney+ shows, especially so, from the sitcom tributes of WandaVision to the animated What If…?, political intrigue of The Falcon and the Winter Soldier, and split personality of Moon Knight. But now, with the Echo series spinning off from Hawkeye, a new synopsis makes it sound more like a Sundance-style homecoming drama than anything else in the MCU so far.

Via Marvel, “the origin story of Echo revisits Maya Lopez, whose ruthless behavior in New York City catches up with her in her hometown. She must face her past, reconnect with her Native American roots and embrace the meaning of family and community if she ever hopes to move forward.” Now, comic-based shows being what they are, some fighting must surely be involved. Still, that sounds more like the plot of an Oscar-bait prestige film than a superhero adventure. And in the first official image, she looks ready to do some honest, hard work: 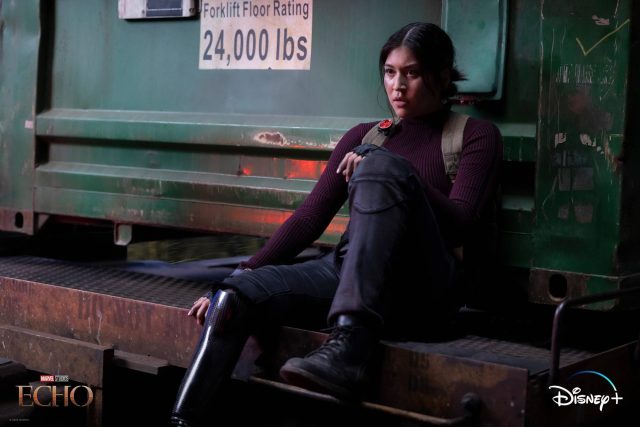 Marvel also confirmed recent casting announcements, including Chaske Spencer, Tantoo Cardinal, Devery Jacobs, Cody Lightning, Graham Greene, and Zahn McClarnon. (Fans hoping to hear anything about Vincent D’Onofrio’s Kingpin might just have to keep hoping.) Episodes of the series will be directed by Sydney Freeland and Catriona McKenzie. Alaqua Cox stars as Echo/Maya. We’ll get to see it in 2023.

What do you make of this image and synopsis? Let us know in comments.

For the first time since Daredevil ended in 2018, Charlie Cox and Vincent D’Onofrio will appear together in Marvel's Echo…
TV 7 months ago

Devery Jacobs, one of the stars of FX's Reservation Dogs, has joined the cast of Marvel Studios' Echo in an…
TV 9 months ago

The star of Marvel's upcoming Echo series has confirmed that production on the highly-anticipated spinoff is finally getting underway.
TV 10 months ago

Obi-Wan Kenobi will have a reason for abandoning his life on Tatooine, as a new synopsis for the series teases…
TV 11 months ago
Loading Comments...