The Falcon and the Winter Soldier Episode 6 – What Did You Think?!

Warning: There are spoilers ahead for The Falcon and the Winter Soldier episode 6!

The new Cap has arrived. For real this time. Disney+ has premiered the sixth episode of The Falcon and the Winter Soldier, and we want to know what the Superhero Hype community thinks about it!

In New York, the Flag Smashers have the GRC cornered in conference. Outside, Sharon Carter reunites with Bucky and joins him for the final battle. However, it’s Sam Wilson’s arrival as the new Captain America that catches the Flag Smashers off guard. Batroc takes the opportunity to attack Sam while Bucky and Sharon attempt to evacuate the GRC counsel members. Regardless, Karli Morgenthau distracts Bucky long enough for her team to kidnap the council.

Sam abandons the fight with Batroc to pursue the Flag Smashers in a helicopter, while Bucky continues his pursuit on the ground. John Walker shows up with his makeshift shield and attacks Karli. However, John ultimately decides to save the hostages over getting his revenge. He even fights side-by-side with the new Cap and Bucky without bringing up the bad blood between them. 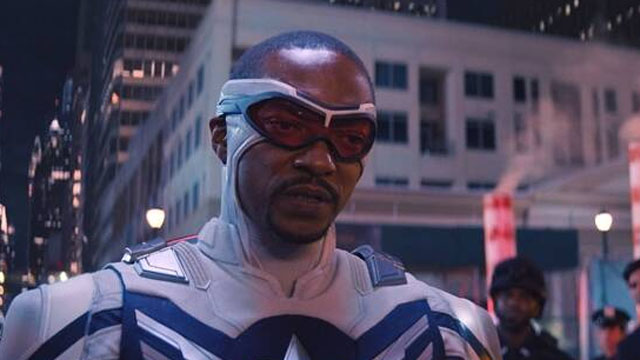 RELATED: The Falcon and the Winter Soldier Introduces [Spoiler]

Sharon catches up with Karli and offers her a chance to rejoin the Power Broker organization. Karli also realizes that Sharon hired Batroc to spy on the Flag Smashers. Unfortunately, Batroc tries to blackmail Sharon once he learns that she’s the Power Broker. In response, Sharon kills Batroc and Karli shoots Sharon. Sam arrives just after, and he tries to reason with Karli. However, Sharon kills Karli when she points a gun at Sam.

In the aftermath, Sam berates the GRC council and challenges them to rethink their actions as the TV cameras broadcast his remarks. Some time later, Sam reunites with Isaiah Bradley, the forgotten super soldier. Much to Isaiah’s surprise and gratitude, Sam makes arrangements for an exhibit at the Smithsonian that fully recounts Isaiah’s story and legacy. Meanwhile, Bucky confesses to Nakajima that he killed his son when he was still under Hydra’s control. Back in Washington, the Contessa gives John a new uniform and dubs him “U.S. Agent.” And in Louisiana, Bucky joins Sam and the rest of the Wilson family for a celebration.

Finally, the mid-credits scene picks up with Sharon as she gets a full pardon, and a reinstatement to the CIA. However, Sharon soon calls her Power Broker contacts and tells them that she will be using her restored security clearance to sell state secrets and weapons.

We still want to hear what you think. So make sure to leave your reviews and theories for The Falcon and the Winter Soldier in the comment section below!

After weeks of rumors, Marvel finally confirmed that Harrison Ford will make his first appearance as Thunderbolt Ross in Captain…
Movies 4 months ago

She-Hulk: Attorney at Law Episode 9 – What Did You Think?!

With her life as She-Hulk spiralling out of control, Jennifer Walters decides to take her destiny into her own hands…
TV 4 months ago

She-Hulk: Attorney at Law Episode 8 – What Did You Think?!

Matt Murdock makes quite an impression on Jennifer Walters, but there's big trouble ahead for She-Hulk as the season heads…
TV 4 months ago
Loading Comments...