McFarlane Toys‘ release pattern for the DC Multiverse figures can get unconventional, to say the least. Sometimes themed waves have a build-a-figure. Other times, they put out one at a time. Sorting them into categories can seem arbitrary, especially when the company is so fond of variants and retail exclusives. So consider this a slightly arbitrary grouping, but this review features six recent releases. Two figures based on the Injustice 2 video game, three that function as a mini-wave highly dependent on reuse, and one Todd McFarlane-designed Batman. So that’s six figures total, which might make up a single wave in another line. 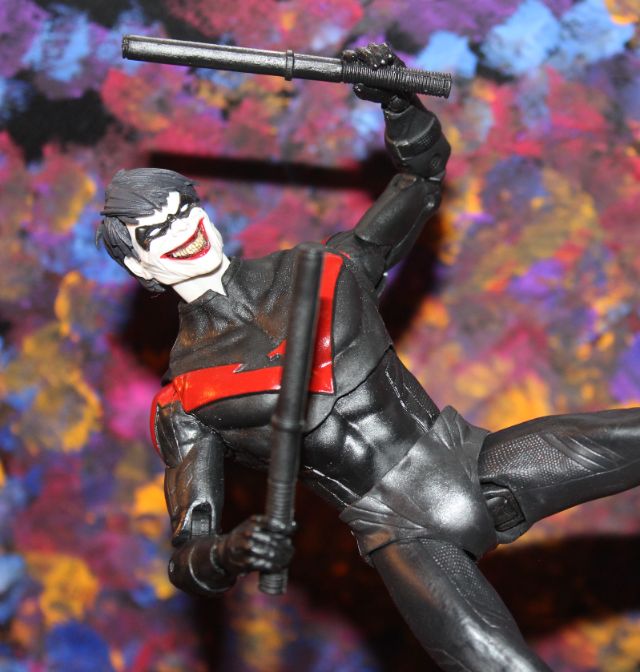 Let’s start with the re-dos. Infected Nightwing marks the third reuse of the Nightwing body, which was the best thing about McFarlane’s very first DC lineup. It has some issues, like the “L” and “R” symbols to aid in figure assembly being visible in the knees still. But it’s mostly a solid, distinctive sculpt, with baton holsters. The Joker venom head looks as great as it should, but if you already own some form of this figure, it’s hard to say another $19.99 ought to be dropped here. 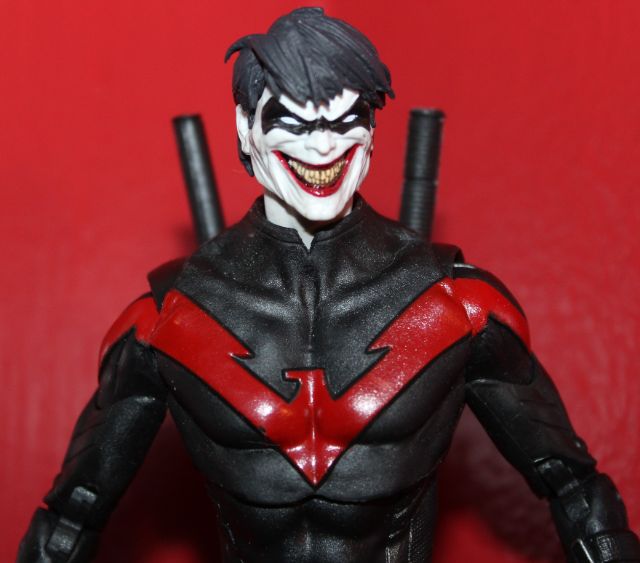 Bizarro re-uses a lot of the Infected Superman figure, including the alternate claw hands. But the S-symbol uses a new sculpt, as does the rubbery shorts piece which expertly conceals the waist joint. And the shredded cape is a differently shredded cape, so that’s nice. Bizarro feels like the most essentially canonical of the two, if one has to choose. But the body sculpt looks great either way. 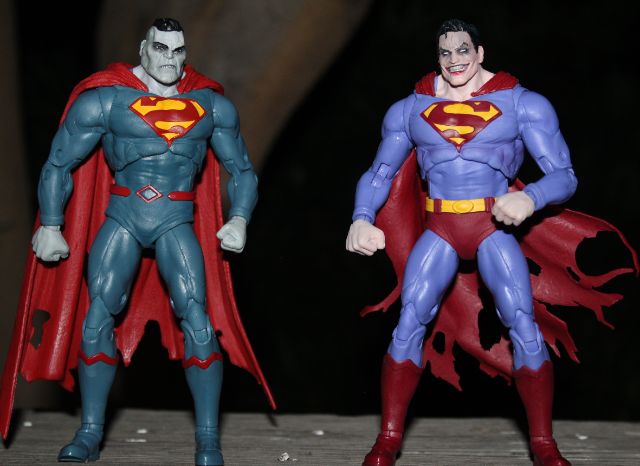 John Stewart, however, is entirely new. And entirely different from the previous animated version, though both come with big guns. They’re not entirely interchangeable, since the individual shades of green differ. This Stewart includes a hard-light shoulder armor that hooks gently over his chest symbol, a backpack to hold it in place, and the dual-handle cannon. He also looks not unlike the Arrowverse’s John Diggle, but that might just be our imagination talking. 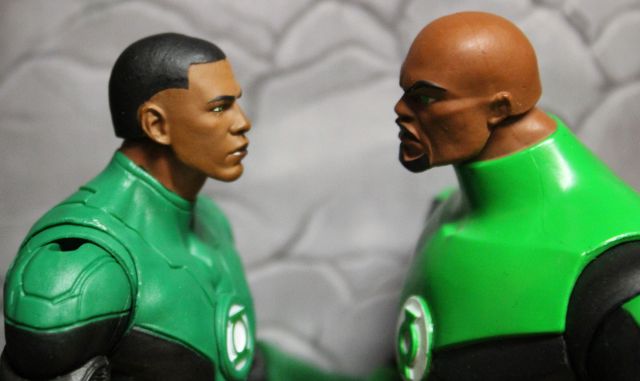 Both Injustice figures boast all-new sculpts as well, with the clear winner being Gorilla Grodd. Toy sculptors love to make big, angry apes: witness NECA’s Planet of the Apes, McFarlane’s Cy-Gor, and both companies’ takes on King Kong. Grodd includes pretty much everything said companies like about all of those. 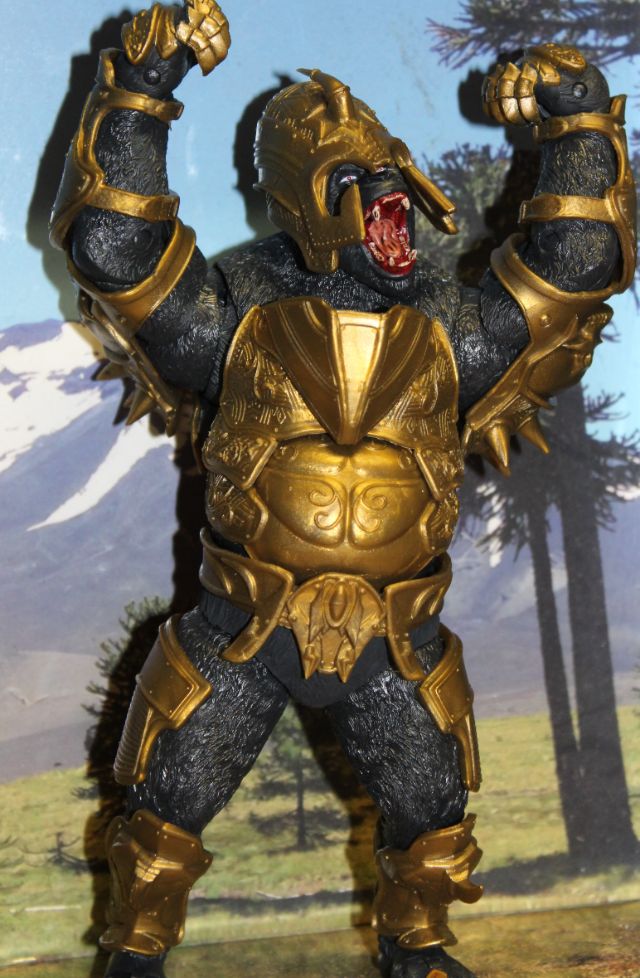 Maybe it’s the size, but his hip joints have the best execution of that particular McFarlane engineering. Their figures generally have an issue with upper thigh rotation, but his work. Like many of the bigger figures, he substitutes pin-and-disc ball joints at the elbows and knees for the double hinge. The only odd design flaw, which one can’t blame McFarlane for executing, is the design of his armor thigh and back plates. They don’t seem to be attached to anything. Just held there on his fur by magic? Or glue? 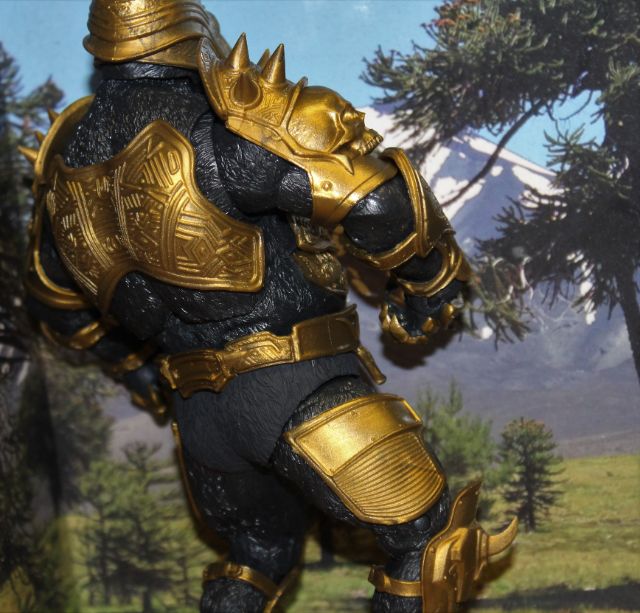 The design of the Flash figure doesn’t look conducive to neutral poses. With head and neck permanently hunched forward, he looks awkward in anything besides a running pose. And even the included stand can’t always hold that permanently. 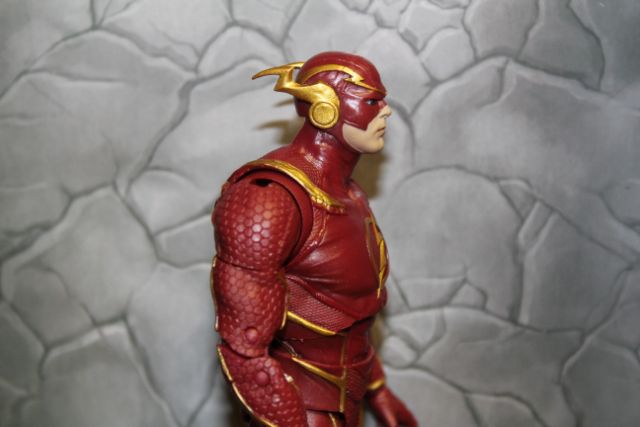 The suit sports a nice level of detail, and he comes with three speed force effects. One for a forearm, one for an ankle, and another that’s a projectile. Attach as best one can, for no specific instructions say how to. 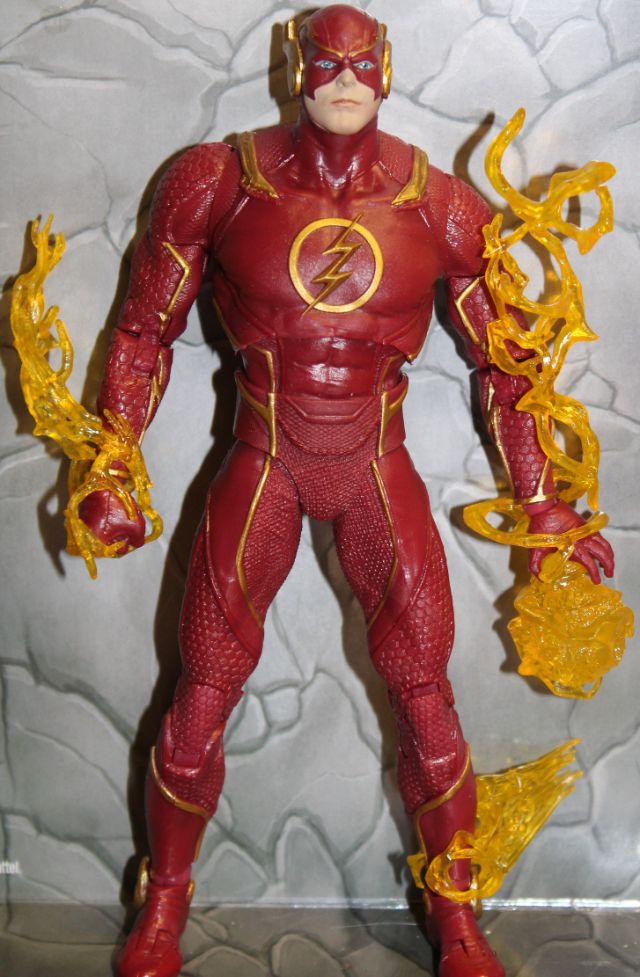 Finally we come to Todd McFarlane’s Batman, who appears to peg-warm in a lot of stores. Which is a shame, because while he may not read as a canonical Batman, he’s a much better figure in hand. Once everyone checks their potential disappointment that a Todd McFarlane Batman doesn’t wear a cape five times his size. Spawn doesn’t need competition. 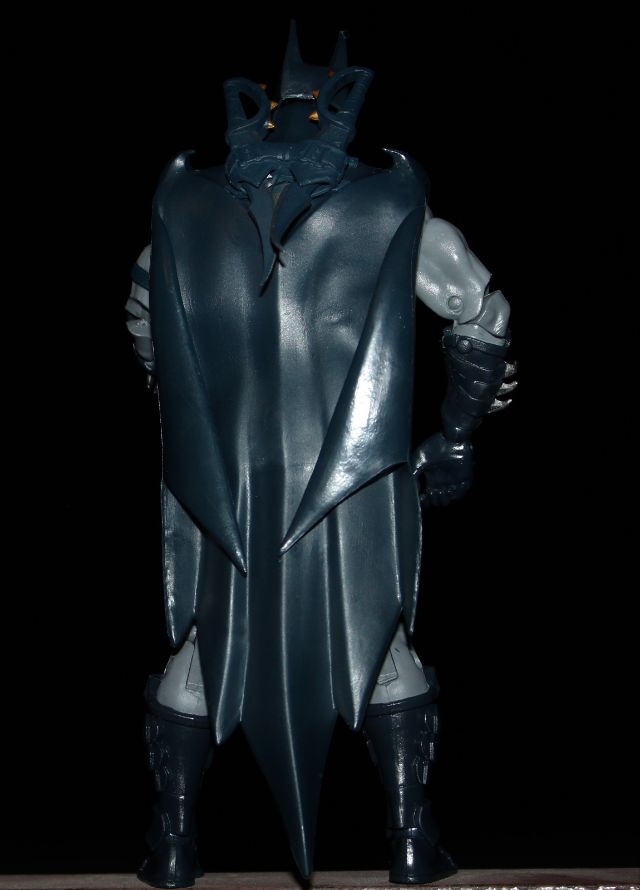 Let’s get the bad out of the way first. The Nite Owl cape is inexplicable in the context of an outfit designed to intimidate. And the dagger holsters are placed in such a way that they ‘d cut his own cape, or even his back, in any kind of action. Take that out of the equation, though, and we’re left with a thicc boi Frank Miller Bruce Wayne in a Gotham by Gaslight-ish garb. With deadly knives. 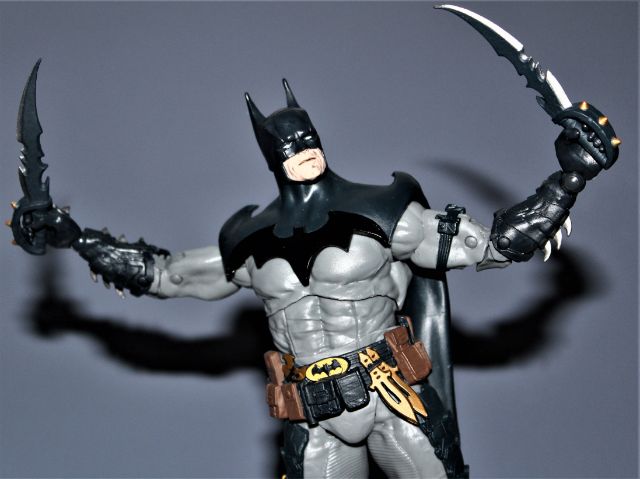 If it helps, think of him as Evil Batman. The sample figure did not include the steampunk goggles shown in early prototypes, but did come with a Batarang and the two scissor knives. The sculpt may not seem accurate to anything, but the sculptors went all-out. 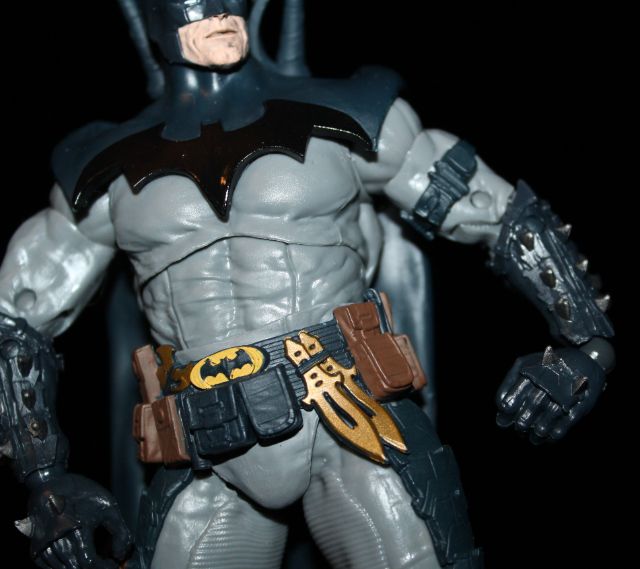 One other odd design choice — the figure includes the exposed ball-joint wrists that McFarlane generally takes pains to conceal on more recent characters. This enhances the ability to display Batman as if he broke his wrist.

That said, the foot joints on nearly all the figures allow for a broken-toes pose. 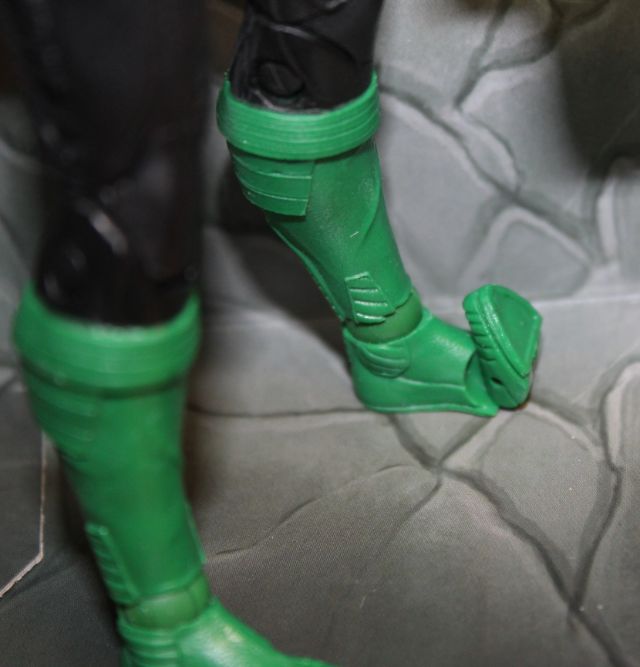 Green Lantern and Grodd come out of this the big winners — all new sculpts, great figures. And GL even uses a layered costume to completely hide his waist joint. Bizarro skillfully reuses parts, while the Nightwing is for either completists or Joker lovers who don’t care much for Dick Grayson normally. Flash and Batman, with strong sculpts but unusual choices, may seem more a matter of personal taste.

Each figure includes the usual McFarlane stand, and a trading card. The cards for the comic figures show comic art, while the two game characters depict the figures themselves. Probably a matter of extra licensing costs.

Want to know more? Our extensive gallery below features many more angles on these figures. Expect to pay around $19.99 at any reasonable retailer. Entertainment Earth still has the Injustice figures and the Batman at that price. Note: Superhero Hype is part of the Entertainment Earth affiliate program, and earns fees based on sales made through site links.

So what do you think? Let us know which figures look best in comments.