Finally hitting theaters after more than a year’s delay, Black Widow, at this point, likely won’t blindside anyone with shocking Marvel Cinematic Universe reveals. A prequel to recent events in the timeline for the vast majority of its runtime, it’s also the most self-contained Marvel movie since Iron Man 3. On some level, it’s also the most predictable, since anyone who has seen the last two Avengers movies knows what must happen to Natasha Romanoff (Scarlett Johansson) directly afterward.

Additionally, it’s more grounded than most of the Marvel movies. The vast majority of the characters don’t have any super powers at all. Black Widow carries over a touch of the Marvel Netflix shows’ darker tone too. Tony Stark’s drinking got curbed the moment Disney fully took over. But Russian characters? They get to sip vodka as the day is long. And in one scene, explicitly use it as a coping mechanism. 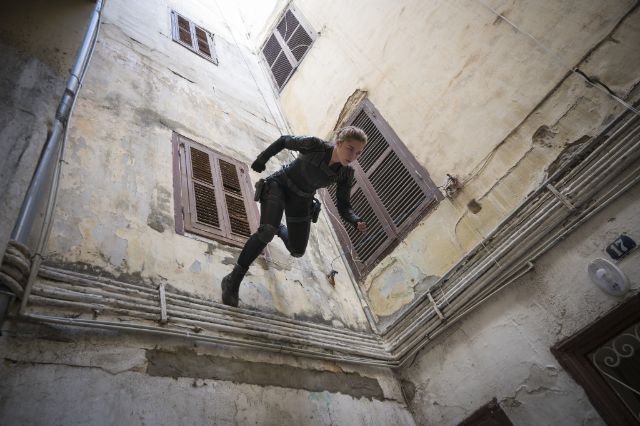 Back when the Russo brothers came aboard the Marvel movies with Captain America: The Winter Soldier, they took great pains on the publicity tour to ensure everyone knew their inspiration was ’70s political thrillers. Black Widow wears its influences much more on its sleeve than that — it’s James Bond action in the Roger Moore style. (Sorry to anyone expecting bedroom scenes: not THAT kind of action.) But times change and while ’70s Bond might occasionally run afoul of critics for going too far in a sci-fi direction, espionage and future tech coexist just fine in the MCU. One very specific Bond film is a key touchstone, and the movie flat-out shows it early on so that we know. It’s been remixed, but its influence is unmistakable. Albeit sexless — as many critics have noted, Marvel movie characters almost never get it on.

Following a disorienting opening that should keep longtime viewers guessing, Black Widow establishes its place in the timeline as directly after Civil War and the Sokovia Accords. Deciding she had better disappear, Natasha plans to do exactly that, before inadvertently getting pulled back in. To old pre-Avengers business, in Budapest, where things she thought were over…aren’t. On the journey, she re-encounters fellow Black Widow program alumni Yelena (Florence Pugh) and Melina (Rachel Weisz), along with former Soviet super-soldier Red Guardian (David Harbour). Pugh fans may note the similar group dynamic here to that of Fighting With My Family, in which she played WWE Diva Paige, from a clan of wacky wrestlers. It’s also a weirdly dysfunctional take on the Fast and Furious found family concept. Replace Corona with vodka, natch. 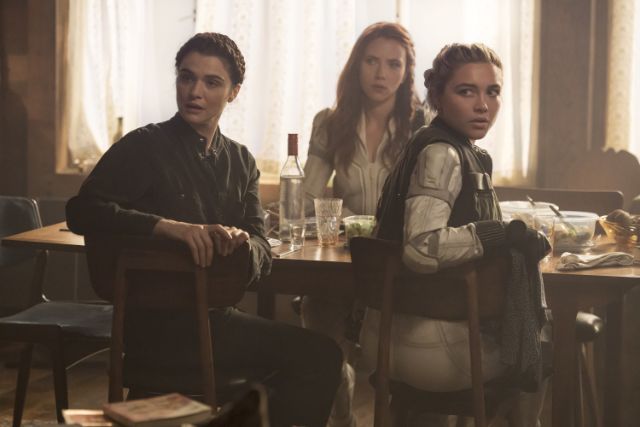 Thematically, there’s a notion here of how a person can never truly run away from family issues. If not dealt with, they continue to grow. And that’s true of surrogate families as well. Pugh in particular epitomizes family roles in her performance, all badass independence by herself, but suddenly and subconsciously reverting to a little sister role when Natasha’s around. Harbour’s role will undoubtedly draw comparisons to Stranger Things, but really, it’s more like an intentionally comedic take on Mickey Rourke’s Whiplash.

Accents vary, but for most of the leads, it’s reasonable to assume they would mix American and Russian. Ray Winstone as a Russian gangster, however, has a much harder time concealing the Cockney within. The villainous and mostly mute Taskmaster lets fists and weapons do the talking, while O-T Fagbenle’s Rick Mason adds some very British self-deprecation as both the Q and Moneypenny to Natasha’s Bond. All of which may make viewers wonder exactly what the geopolitics of the MCU are. We know Iron Man 3 dealt with an entirely fictional U.S. President, but Black Widow‘s opening montage includes Bill Clinton, Boris Yeltsin and Vladimir Putin. Did Donald Trump have to deal with the Snap? When does history diverge? 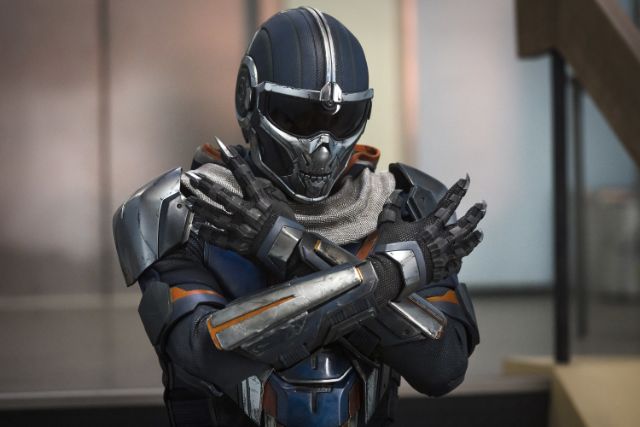 That’s a question too big for this movie. Although it does also open many possible ramifications for sequels, while ending its own arc in reasonably satisfying fashion. Fans who come to the MCU in search of huge surprises might not feel served. But the narrative includes enough swerves to keep from being entirely predictable. Connections to the larger MCU — besides the obligatory beginning and end connective tissue — stay confined to jokes, asides, and of course the expected post-credits scene.

Black Widow is most definitely lesser MCU. It’s a side quest to the main story, and a wrench in the works for anyone watching the movies chronologically. Is it Phase 4 if it took place during Phase 3? And it’s weirdly anti-heroic. We’re constantly reminded that Natasha is a killer who may not be much better than her less savory peers. And an unfit role model to young girls, to boot. Arguably, the events of the movie ultimately refute this. Or they establish why she would make the big, selfless, Soul Stone sacrifice she eventually has to.

The action is excellent throughout. Director Cate Shortland doesn’t share the Russos’ affinity for stutter-vision, but she does like just a touch of the Paul Greengrass shaky-cam. The reclamation of certain maligned moments from other movies is a hoot. On the other hand, anyone using a slow cover version of “Smells Like Teen Spirit” that isn’t Tori Amos’ definitive contemporaneous piano take earns a mild rebuke. Sticklers for comics fealty may not be entirely happy with certain changes from established lore. But there’s room for future retconning, just like the whole “real” Mandarin takeback.

Black Widow star David Harbour teases what fans can expect from his character's next MCU appearance.
Movies 3 months ago

Our Wakanda Forever review: It is to Ryan Coogler's credit that Black Panther 2 manages to be as entertaining as…
Movies 3 months ago

It's a richly detailed fantasy with many complex narratives that conclude a bit too easily.
Movies 3 months ago
Loading Comments...