There’s no irony to it when we say “Nooooooooo!” this time. Dave Prowse, who was Darth Vader most of the time on the set of the original Star Wars trilogy, has died at the age of 85. Though the voice of James Earl Jones is better known to the public, all those iconic Force-chokes and beckoning gestures were Prowse, a bodybuilder with formidable strength. Able to rip phone books in half, he caught George Lucas’ eye in Stanley Kubrick’s A Clockwork Orange, in which he was cast due to his ability to lift actor Patrick Magee and his wheelchair — and Malcolm McDowell — with ease. Lucas didn’t find Prowse’s rural English accent sufficiently intimidating, so he had Jones overdub, much to the former’s chagrin. Yet the actor returned not just for the full trilogy, but also a couple of Star Wars video games in the late ’90s. 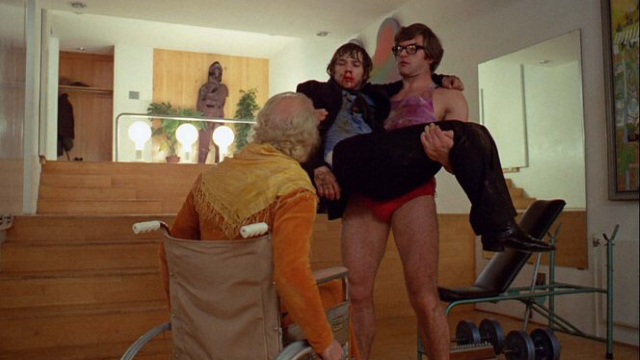 Prowse didn’t just embody a cinematic icon; he also trained a couple. Christopher Reeve owed his Superman physique to Prowse’s training. As a personal trainer, he counted among his clients Daniel Day-Lewis, Albert Finney, and Vanessa Redgrave.  Fencer Bob Anderson had to substitute for him in the lightsaber battle scenes, however. Because Prowse’s blows were so hard they broke the sabers.

As an actor, he made his film debut playing a Frankenstein monster lookalike in the James Bond spoof Casino Royale. Later, he would go on to play the monster in two Hammer horror features. Typically cast for his physicality, he became best known in the UK as traffic safety superhero the Green Cross Code Man. Warning kids to stop, look, and listen, he taught children how to safely cross the street for many years. Other career highlights included playing a minotaur on Doctor Who, a bodyguard in the TV Hitchhiker’s Guide to the Galaxy, and the Black Knight in Terry Gilliam’s first solo feature Jabberwocky.

He and Lucasfilm argued in recent years, in part due to his blunt manner in interviews and an argument over his right to sign autographs “Dave Prowse is Darth Vader” legally. Barred from appearing at official Star Wars Celebration events, he nonetheless continued to attend other fan conventions while his health still held up. Other actors have indeed played Vader since, including Hayden Christensen in Revenge of the Sith and Spencer Wilding in Rogue One. But it’s Prowse whom we mostly remember, from moments like him beckoning to Luke on Bespin, or throwing the Emperor down a shaft.

Thanks for the memories, Dave.

After 45 years, James Earl Jones is officially stepping down as the voice of the Star Wars franchise's most enduring…
Movies 4 months ago

Vader's not alone.
TV 8 months ago

Obi-Wan Kenobi Episode 3 – What Did You Think?!

With the help of a new ally, Obi-Wan Kenobi and his young charge may yet escape. But the Dark Lord…
TV 8 months ago

We might get to see more of Hayden Christensen's Darth Vader beyond his appearances in Obi-Wan Kenobi and Star Wars:…
TV 9 months ago
Loading Comments...